A Canadian LAV (light armoured vehicle) arrives to escort a convoy at a forward operating base near Panjwaii, Afghanistan at sunrise on Nov.26, 2006. Foreign Affairs Minister Francois-Philippe Champagne says the federal government has renegotiated a $14-billion deal to supply a modernized version of the LAV to Saudi Arabia to secure better conditions. (Bill Graveland/THE CANADIAN PRESS)

Canada has renegotiated a new contract with Saudi Arabia, allowing Ottawa to speak more freely about a controversial deal to export hundreds of light armoured vehicles (LAVs) and clearing the way for more arms sales to the kingdom, the foreign affairs minister announced Thursday.

Francois-Philippe Champagne said the government will now begin a “case by case” review of about four dozen export permits for new arms sales to Saudi Arabia that have been sitting on his desk since the Liberal government announced a ban on new arms exports to the oil-rich kingdom in the fall of 2018.

That ban, which was introduced by the Trudeau government following the brutal murder of Saudi dissident journalist Jamal Khashoggi, did not affect existing contracts, including the $14-bllion contract to supply the Saudi National Guard with the newest model of LAVs, Champagne said.

‘That train has already left the station’ 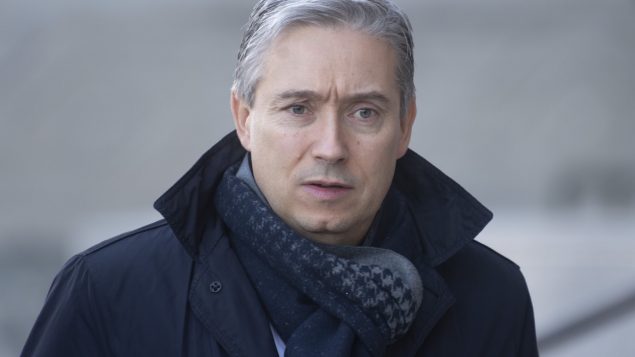 “That train has already left the station,” Champagne said. “This contract has been in force for six years and is about 50 per cent complete.”

Champagne said the original contract signed by the previous Conservative government in 2014 and approved by the Liberals in 2016 was so restrictive that the government risked billions of dollars in penalties just for discussing its terms.

The contract, which was brokered by the Canadian Commercial Corporation (CCC), a Crown corporation that helps Canadian companies in aerospace, defence, infrastructure and other sectors to land contracts with foreign governments, is governed exclusively by Saudi law and subject to the Saudi judicial system, Champagne said.

Finance Minister Bill Morneau and his team were able to renegotiate better terms for the contract, which now gives the government a bit more room to speak about the arrangement. Champagne said.

It can now acknowledge the penalties in the deal for cancellation or default could go up to the full value of the contract, Champagne said.

However, the government still can’t discuss how many LAVs it will export to Saudi Arabia under the deal, he added.

“We really cannot talk about the specifics of the contract,” Champagne acknowledged.

Morneau also got the Saudis to commit to a faster payment schedule on payment arrears for the contract, Champagne said.

In addition to the revised deal, Champagne announced that the government is committing to a new system of export permit approvals for international arms sales.

The government will assemble an arms-length expert panel to advise the foreign affairs minister on arms exports permits in addition to the internal review of the permit application conducted by Global Affairs Canada, Champagne said.

The new regime will also be retroactively applied to all existing permits to make sure that “there was no substantial risk that they will be used to commit or facilitate violations of international humanitarian law, human rights law or acts of gender-based violence,” Champagne said.

Under the Export and Import Permits Act (EIPA), requires the minister of foreign affairs to assess all proposed arms export or brokering permits against criteria related to international peace and security and human rights.

“Canada must stop sending arms to Saudi Arabia. Now!” Jaramillo said. “Anything else constitutes a blatant perversion of arms control regulations, and a shameful abandonment of commitment to human rights and the rights of women. The gap between rhetoric and reality has become too great to ignore.”

Former Bloc Quebecois MP and University of Montreal law professor Daniel Turp, who has spearheaded legal action to force Ottawa to disclose the terms of the LAV deal with Riyadh and stop arms sales to the kingdom, said the timing of announcement by Champagne – made in the late afternoon just before the long Easter weekend – was disingenuous and highly suspect.

The timing of the announcement had “nothing to do” with COVID-19 or the plunge in global oil prices, Champagne said.

“The timing of today is really the fact that these amendments were signed by the Saudi counterparts on the 31st of March, 2020,” Champagne said.

No thaw in relations with Riyadh

Champagne also rejected the notion that the deal points to a thaw in relations between Ottawa and Riyadh.

“I am not sure about that,” Champagne said. “Suffice to say the human-rights’ record of Saudi Arabia remains troubling, particularly when it comes to social and political rights and women’s rights, so we will continue to advocate for human rights.”

Champagne pledged to make public “in coming days” a report prepared by Global Affairs officials in September of 2019.

A redacted version of the report released by the government claims to show that, while Ottawa was concerned by the human rights abuses in Saudi Arabia, Canadian arms exports to the kingdom were in no way linked to those abuses.

He declined to say whether Canada sought assurances from the Saudis that the combat troop carriers will not be used in offensive military operations. It was also not clear how Canada can make sure that Saudi Arabia is honouring the deal given that Canada has no ambassador in Riyadh and embassy staff are reportedly not allowed to visit the country’s border regions with Yemen.

Champagne insisted that, by signing the renewed deal, Canada was cementing its position as an international standard-bearer for human rights and a champion of the UN’s Arms Trade Treaty.