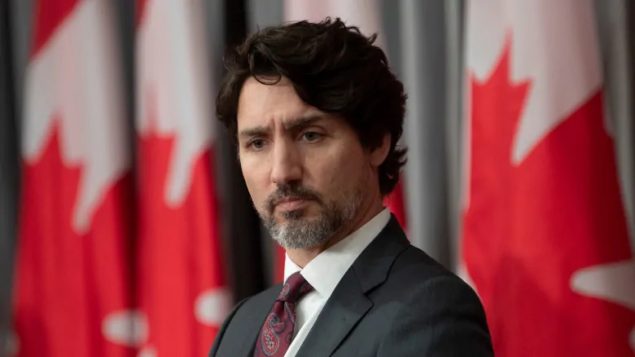 Liberal Prime Minister Justin Trudeau at a press briefing today announcing an immediate ban on 1,500 types of firearms. using an "order-in-council' and not be debated in Parliament (Adrian Wyld-Canadian Press)

With the 22 murders in Nova Scotia still fresh in Canadian minds, most of them by the perpetrator’s illegally obtained firearms, the Liberal government has moved to announce an immediate ban on what they are now calling ‘military grade’ firearms.

The government announced that it has drawn up a list of 1,500 firearms, models and variants of such styles as the ARmalite-15,and other models which have been used in shootings.

The Mini 14 . commonly bought by hunters for small game, and by farmers for pest control like coyotes. This was the gun used in the Polytechnique shooting of 14 women in 1989 . Arms Control lobby PolySeSouvient has long requested the firearm be banned. Under the announcement today it will be among the 1,500 types banned immediately (Ruger Arms)

Using ‘regulations’ it says that from today onward the thousands of legal owners of such firearms cannot buy, sell, trade, use, or transport them.

In a special press briefing today, they said there will be a two-year grace period during which the government will unveil a buy-back programme. Justice Minister David Lametti said, noted that current legal gun owners who have not disposed of their banned firearms by April 2022 would face charges under the Criminal Code

Heidi Rathjen, Polytechnique graduate and coordinator of PolyRemembers said in a statement: “The Liberal government is finally delivering on its top gun control promise. The ban is comprehensive. The circulation and use of these weapons will be severely restricted during the two-year amnesty. We hope the Trudeau government will display the same political courage when it proceeds with the reform of the current flawed classification system in order to make such a ban permanent”.

Questioned on a CBC news programme the leader of the opposition Conservative Party, Andrew Scheer, said, the announcement was “completely inappropriate when parliament is not sitting and using the pandemic to bring in a major policy changes, especially when they’re proven to be ineffective”.

Scheer also said criminals will not be bothered by such laws and what the Liberals are doing is “symbolism over substance” adding the government should be going after criminals and smugglers and not law-abiding owners.

The government has indicated the cost of an eventual buyback would be in the hundreds of millions of dollars, but others, including the Canadian Sporting Arms and Ammunition Association (CSAAA) have said it will more realistically be in the billions.  The association which represents most of the small and medium sized businesses involved in the industry in Canada also said the move would result in the loss of “thousands of small outfitter businesses and jobs”.