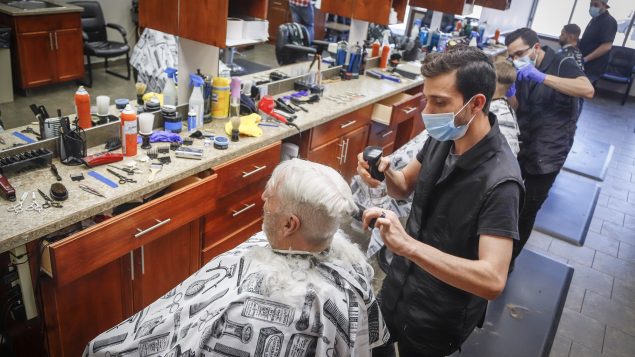 Barber Salim Alhaj, cuts the hair of client, John Gee, of Calgary, who came to the Kingsview Barbershop on its re-opening in Airdrie, Alta., Thursday, May 14, 2020, amid a worldwide COVID-19 pandemic. (Jeff McIntosh/THE CANADIAN PRESS)

The COVID-19 pandemic could bring long-lasting changes to the lives of Canadians and the things they took for granted until the virus swept through the country and upended our daily lives, Prime Minister Justin Trudeau said Thursday.

Speaking at his daily press conference in Ottawa, Trudeau was responding to a warning by the World Health Organization (WHO) that the new coronavirus may be here to stay.

“This virus may never go away,” the WHO’s emergencies chief Dr. Michael Ryan said in a news briefing on Wednesday. “This virus may become just another endemic virus in our communities.”

Without a vaccine, Ryan said it could take years for the population to build up sufficient levels of immunity to it.

Ryan said there remains hope that an effective vaccine will be developed, but even then, it would require a huge amount of work to produce the shots and distribute them worldwide to people willing to be immunized.

Canadians will have to learn to live the virus until a vaccine or an effective treatment is developed, Trudeau said.

“We have seen measures brought in that have made shifts in our society some for the better, some for the worse,” Trudeau said.

“COVID-19 will be one of the things that creates changes in our society. Our responsibility as a society, as governments is trying to figure out how to minimize the negative impacts of those changes while maximizing the safety of Canadians.”

‘The trajectory of this outbreak is in our hands’ 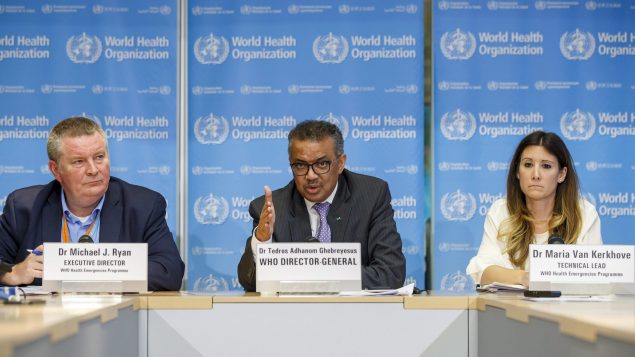 In this Monday, March 9, 2020 photo, Tedros Adhanom Ghebreyesus, director general of the World Health Organization speaks during a news conference on updates regarding on the novel coronavirus COVID-19, at the WHO headquarters in Geneva, Switzerland. Accompanying him are Michael Ryan, left, executive director of WHO’s Health Emergencies program, and Maria van Kerkhove, right, technical lead of WHO’s Health Emergencies program. (Salvatore Di Nolfi/Keystone via AP)

Maria Van Kerkhove, WHO’s technical lead for COVID-19, said that she recognized some people were “in a state of feeling quite some despair,” but pointed out that stopping the virus even without medical interventions was possible.

“The trajectory of this outbreak is in our hands,” she said. “We have seen some countries bring the virus under control.”

Separately, the European Medicines Agency, which approves medicines for the European Union, said a vaccine could be approved in about a year under an “optimistic” scenario.

One thing that could help will be accurate antibody tests to establish who has already had the disease and therefore may have formed a degree of immunity.

Britain confirmed on Thursday it is in talks with Swiss drugmaker Roche Holding AG to buy its test, following the lead of the European Union and United States, which have already given it their preliminary approval.

What remains unclear is how many orders have already been placed by other countries and when those tests would arrive.

“We are now moving as fast as we can to discuss with Roche purchasing of those but I can’t give you an exact date when we’ll be able to start rolling them out,” said Edward Argar, Britain’s junior health minister.

As of Thursday morning, there were more than 4.3 million reported coronavirus cases worldwide, with more than 297,000 deaths, according to a tracking tool maintained by Johns Hopkins University.