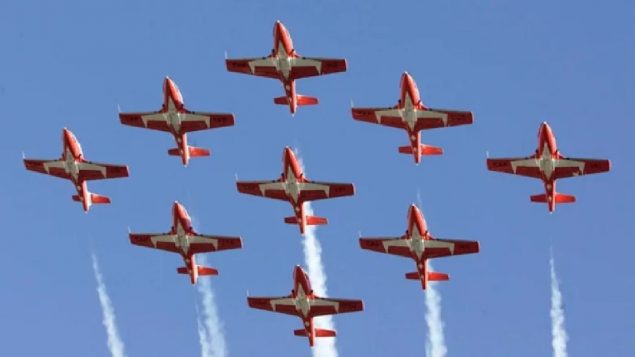 The Snowbirds military aerobatics team was first formed for Canada's 1967 Centennial celebration, then reformed in 1971 performing around the continent since then as a demonstration team . Shown here in 2008 above Regina Stadium in Saskatchewan (Roy Fleece-The Canadian Press)

Canada’s air force suffered another deadly loss this weekend even as it was attempting to lift the spirits of Canadians dealing with COVID-19.

The famous RCAF aerobatics team known as the ‘Snowbirds’ had been on a two week cross-country tour performing aerial exhibitions in city after city as they moved from east to west across Canada on ‘Operation Inspiration’.  The morale boosting effort began on May 2 to “honour Canadians doing their part to fight the spread of COVID-19”

On Sunday two of the jets had just taken off from the local airport in the British Columbia city of Kamloops when one seemed to have a problem, The pilot appeared to try to gain altitude before he ejected. Although two puffs of smoke are seen just before the crash, presumably from the ejection seats, only one parachute was seen.. 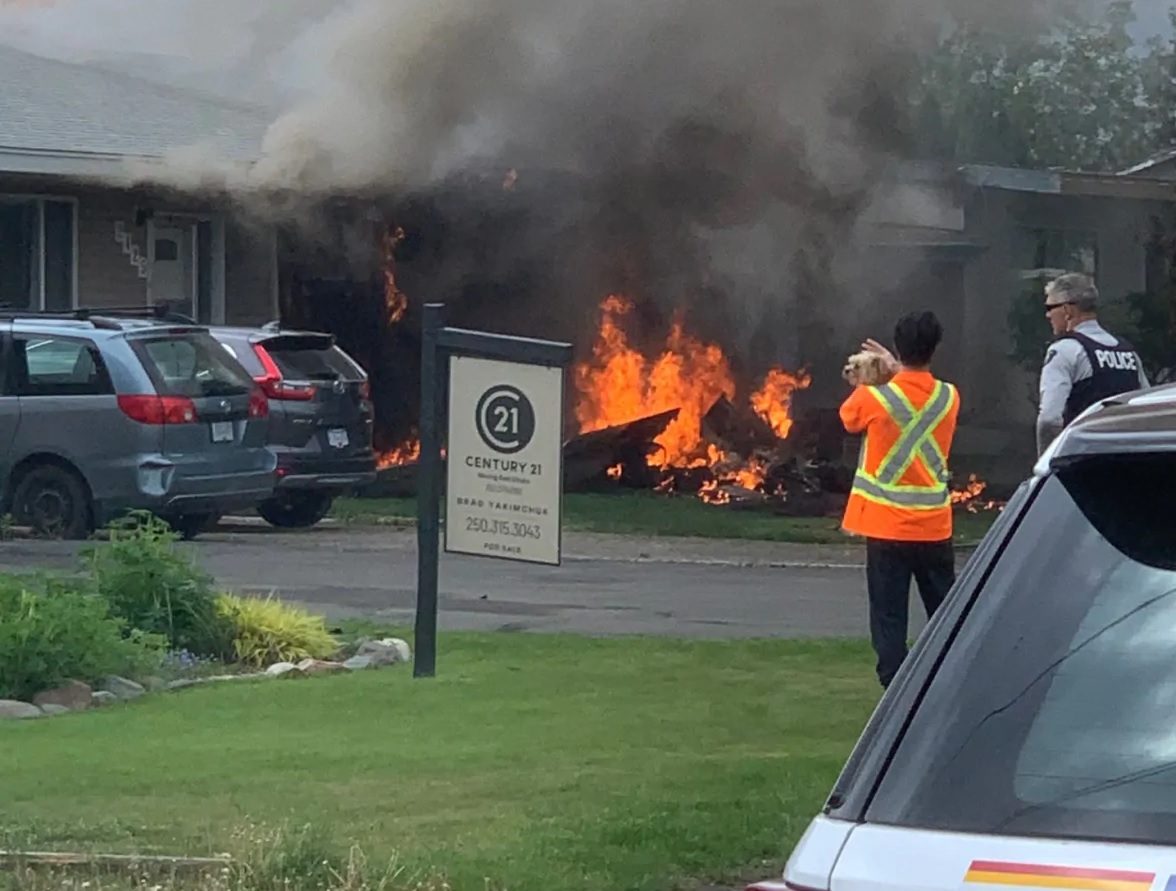 The jet crashed into the front yard of a house in a residential section setting fire to the house. No one on the ground was injured (Elwood Delaney via CBC)

While no one on the ground was injured,  passenger Capt. Jenn Casey, a public relations officer with the Canadian Forces, was killed . The pilot landed on the roof of a nearby house and has sustained non-life threatening injuries.

The tragedy comes less than three weeks after six members of the Canadian Forces were killed in a helicopter crash during NATO naval exercises off the coast of Greece.

A specialized military team left Ottawa last night headed to the scene to investigate the crash. 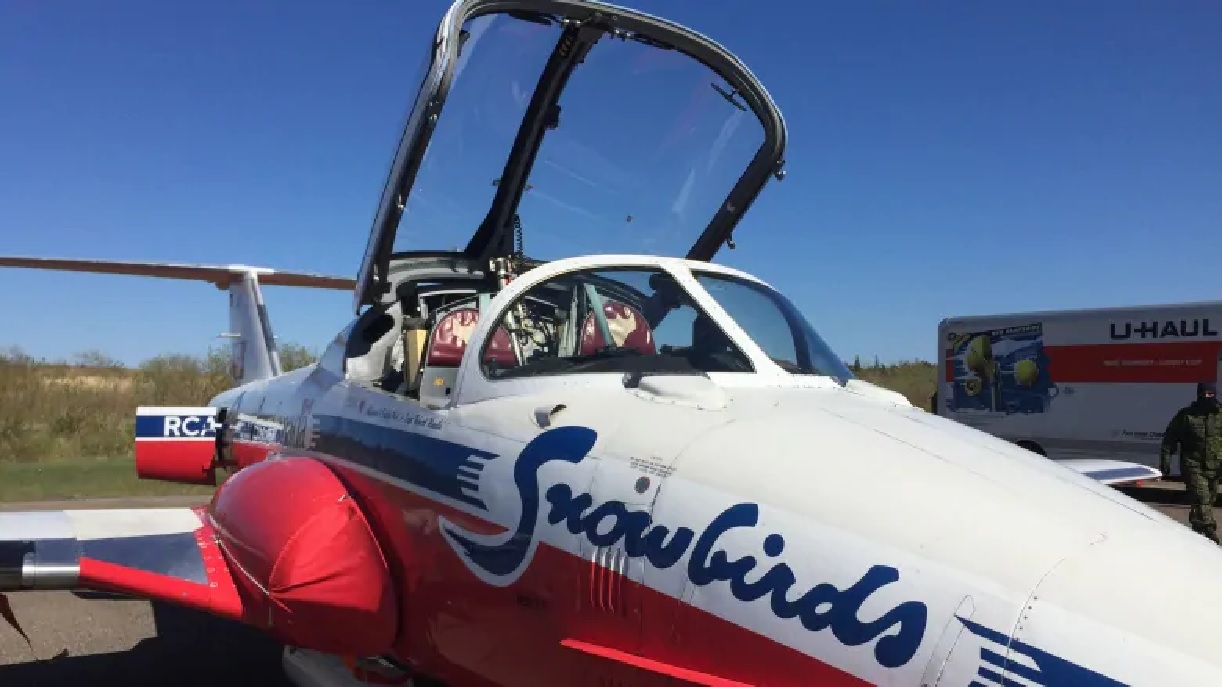 The Snowbirds use a former military training jet first acquired by the RCAF in 1963. They have been performing with the jet since 1971 as 431 Air Demonstration Squadron. Retired by the military in 2000, the Snowbirds team maintain 11 of the jets with nine for performances and two as backups. 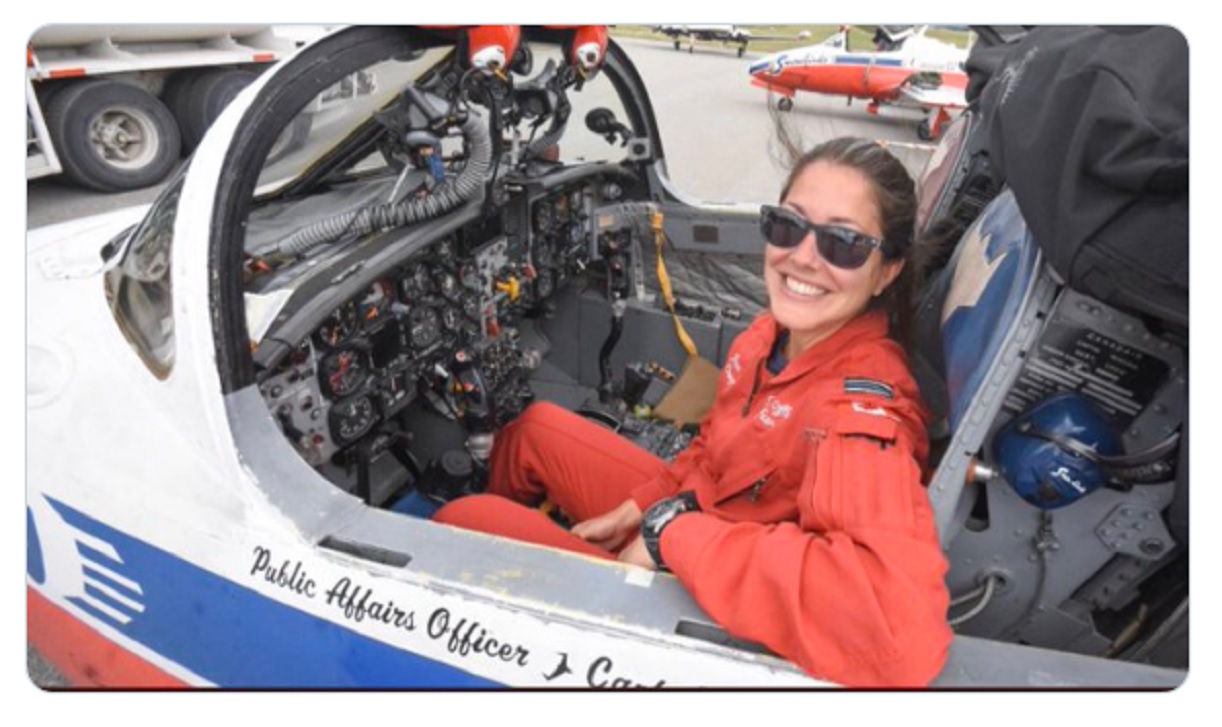 Capt Jennifer Casey was killed in the accidente. (Twitter- Hayley Wickenheiser ” Grew up just two hours from the #CFsnowbirds near Moose Jaw. We used to hear them fly all the time. Heartbroken to hear about the loss of Capt. Jennifer Casey.. Love the @RCAF-ARC and mu role as Hon.Col of the 401 Fighter Squadron. These pilots are so brave. Thinking of them all”

The team has suffered a number of accidents since its creation, some of them deadly.

The first tragedy came in 1972 in Trenton, Ontario, followed by others in 1978 in Grande Prairie Alberta, 1989 in Toronto, 1998 near Moose Jaw, Saskatchewan where the team is based, 2004 Mossbank Saskatchewan, 2007 in Malmstrom, U.S air base Montana, and in 2008 Moose Jaw, Saskatchewn. There have been several other incidents where planes have been damaged or crashed, with either slight or no injuries to crew.

On Sunday evening, Defence Minister Defence Minister Harjit Sajjan said in a statement, “Operation Inspiration was intended to lift the spirit of Canadians at this difficult time and the Snowbirds accomplished their mission. I know that all Canadians grieve this tragic loss.”