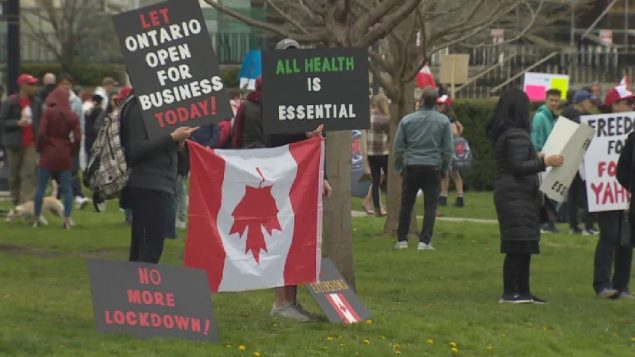 Protesters have gathered on the Ontario legislative grounds to demand that the provincial government lift restrictions in place to slow the spread of COVID-19. At its peak, there were an estimated 300 people. A few held an upside down Canadian flag. This May 9 gathering was the second such protest in Toronto (Mehrdad Nazarahari/CBC)

Even as Canada’s most populous province,Ontario, prepares to ease some of the emergency health restrictions, Toronto saw its largest anti-lockdown protest this past weekend.

About 500 people came out on a sunny Saturday in a non-violent protest against the lockdown which was instituted as part of the efforts to control the spread of the deadly COVID-19 virus. 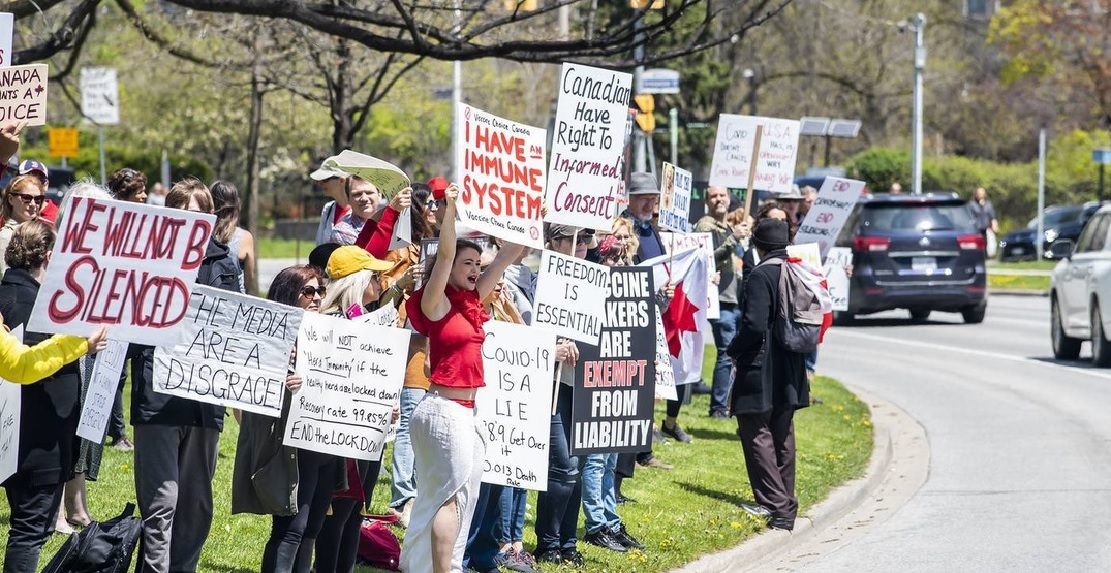 The fourth such weekend gathering, there were many more signs being carried this time, and with an eclectic variety of messages, not all of which were directly related to the lockdown.

The health emergency with its restrictions on gatherings and business closures has put millions out of work in Canada and resulted in massive disruption and loss to the economy and personal lives. Similar situations around the world have also occurred as governments instituted emergency measures and restrictions of civil liberties in an effort to contain the pandemic. 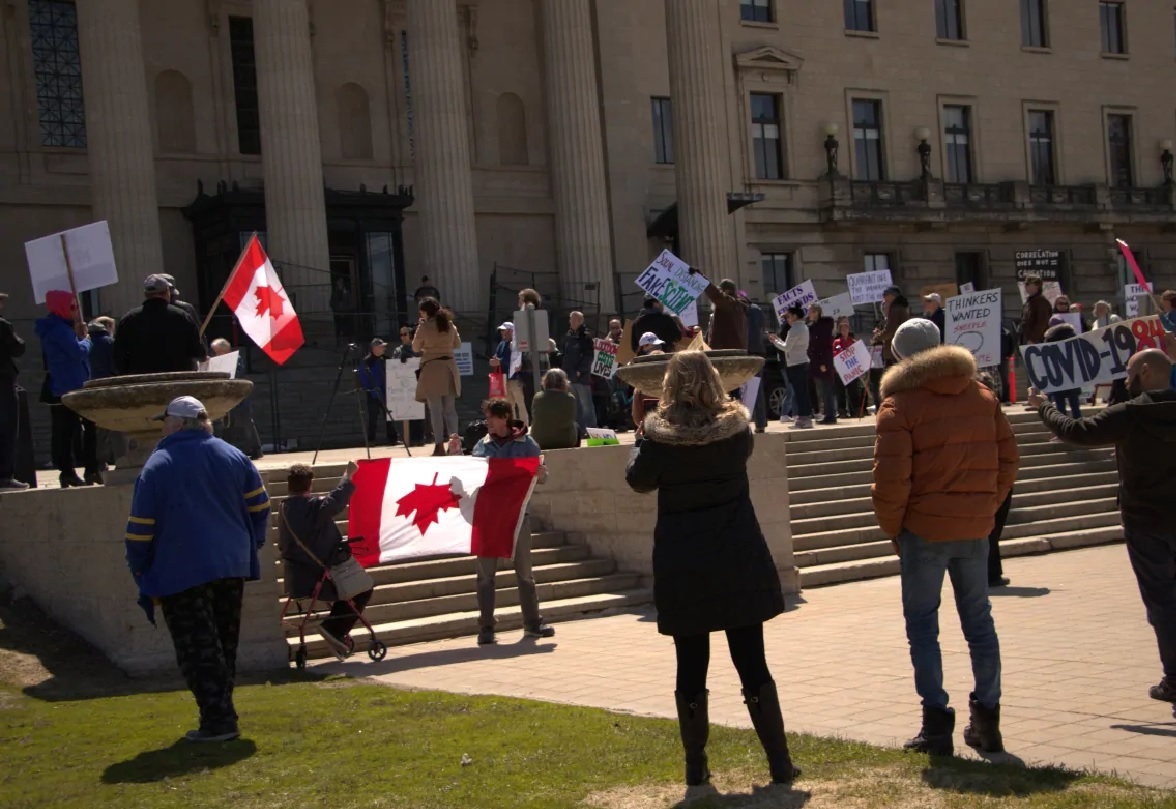 There have been several relatively smalll anti-lockdown protests in Canada. Here, protesters on May 9, in front of the Manitoba legislature in Winnipeg say harms of widespread lockdowns due to pandemic outweigh benefits. (Mohamed-Amin Kehel/Radio-Canada)

After weeks of ‘containment’, groups of people are beginning to push back with anti-lockdown protests.

While there have been much larger such protests in Europe and the U.S., in Canada, the protests so far in a few major cities have been relatively small, Toronto’s gatherings in front of the provincial legislature grounds known as Queen’s Park being the largest. 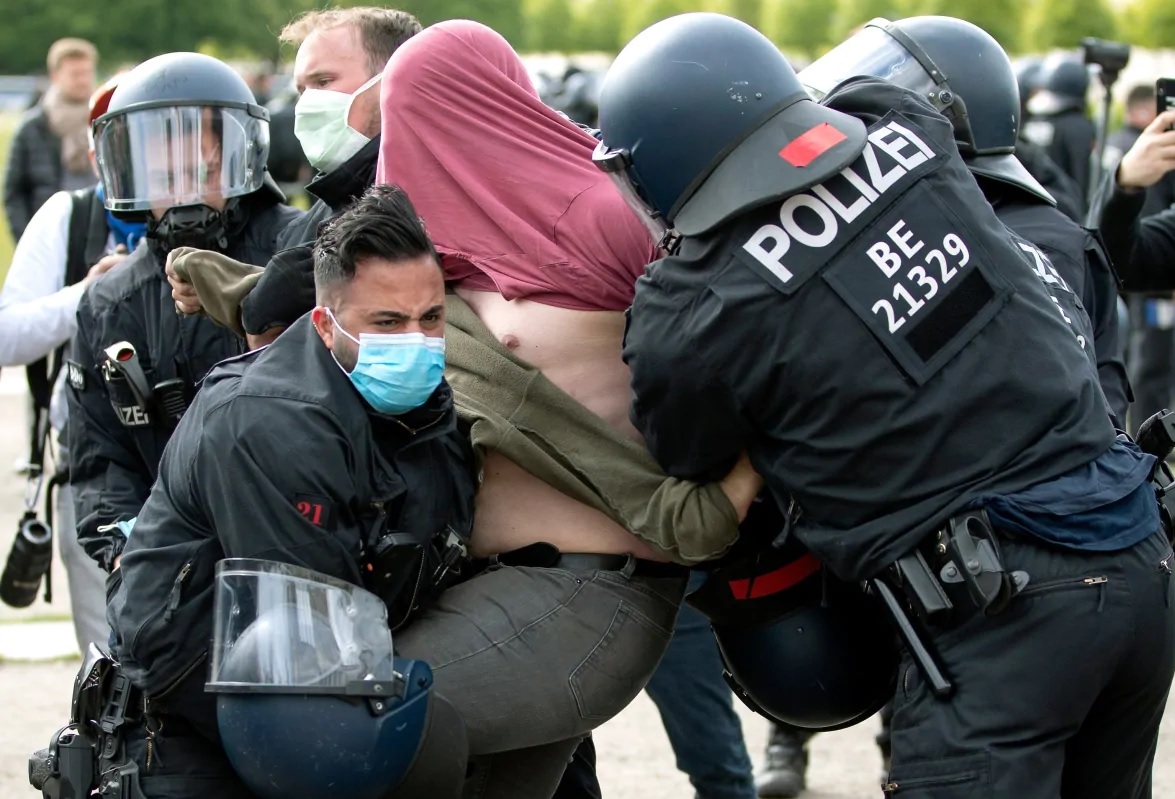 German and other anti-lockdown protests in Europe have been much larger, some in the thousands. Here, police officers arrest a person during a protest in Berlin on May 16, 2020. Demonstrations took place in several European cities against restrictions aimed at controlling the spread of the coronavirus. (Michael Sohn/The Associated Press)

The same day as the Saturday protest, the City of Toronto issued a media statement on the website saying, ” While healthy residents are encouraged to get fresh air and exercise, provincial orders and the City bylaw on physical distancing remain in effect, requiring people who are not from the same household to maintain a physical distance of two metres in a park or public square. The City’s coordinated COVID-19 Enforcement Team is continuing their important work across the city, educating residents on the bylaw and provincial Emergency Management and Civil Protection Act orders. This month, the enforcement team has issued 106 tickets related to the use of amenities or gatherings in parks orsquares and spoken to almost 3,000 people”..

In spite of defying the ‘social distancing’ order between people and rules against crowds, police did not fine any of the protesters.  In the past there has been concern from individuals and civil rights groups about the heavy fines handed out by police and bylaw officers in cities across Canada for such simple acts as sitting on a bench in parks which had been declared closed.

Unlike some incidents in the U.K and Europe, the Toronto protest, and others in Canada have been relatively incident free. 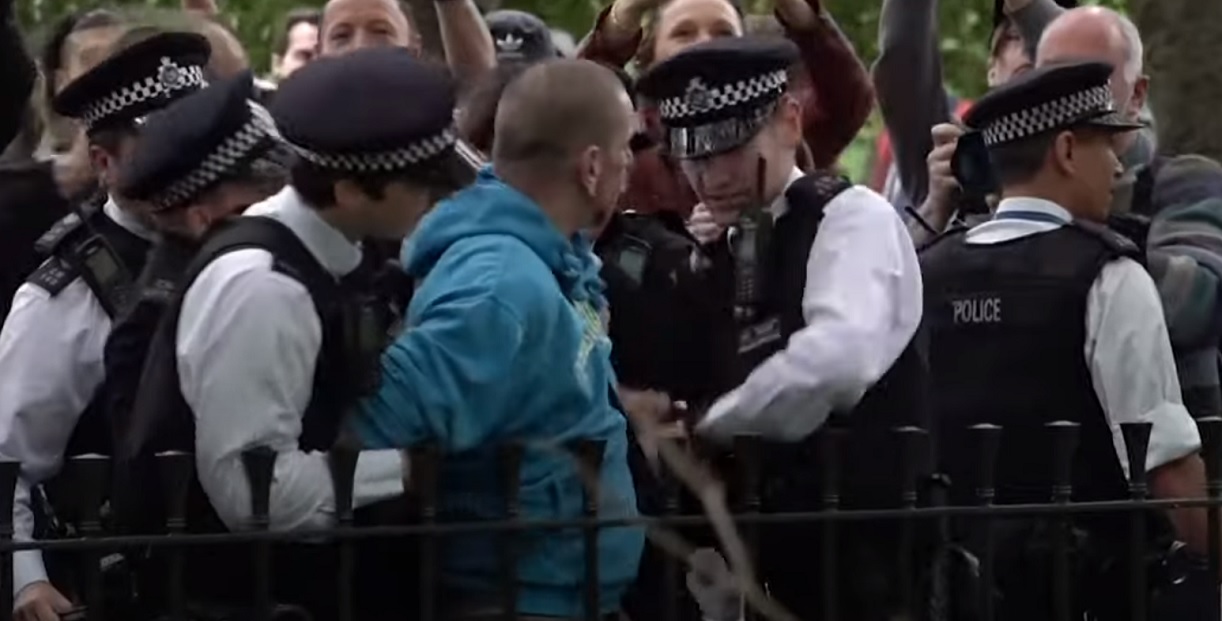 May 16: Police at “Speakers Corner” in London arrested a number of people protesting the lockdown’s infringement of civil liberties. Some have noted the police are also not adhering to social distancing rules. (YouTube)

This latest gathering in Toronto however seems to have included a few people protesting against forced vaccinations, a subject that has been briefly proposed in political and medical circles, while some had religious messages and a few others protested the federal government gun ban. 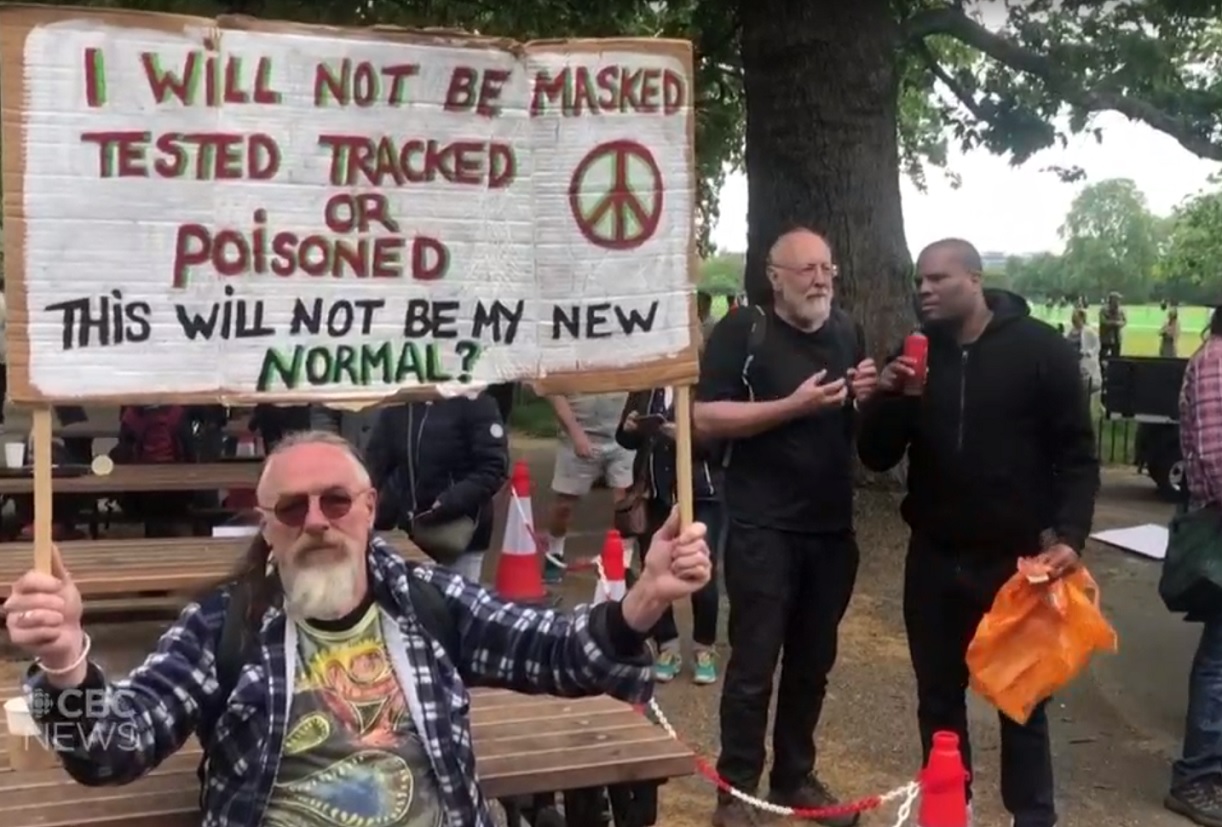 One of the protest signs in London England this weekend. (via CBC)

There is no federal lockdown in Canada, but the provinces had instituted their own health states of emergency with corresponding lockdowns, although with some slight variations on restrictions.  They are now beginning to ease restrictions as is the case with most countries.