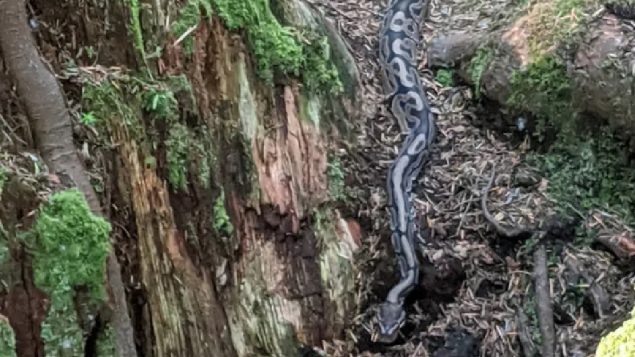 This ball python, under a metre long, was spotted inside Tynehead Regional Park in Surrey on Wednesday afternoon and recovered Thursday. (Paul Peterson/Facebook)

This week a hiker in a regional park in lower British Columbia got a shock when he spotted something completely out of place.

Paul Peterson didn’t know exactly what it was, but it was a large snake, and it shouldn’t be there.

Searchers from a group called Westcoast Reptile Education Society went to the Tynehead Park in Surrey the following day and soon located what they identified as a ball python, normally found in west and central Africa.

Because of the cool temperatures the snake had not moved far from where it had been initially spotted. Park officials say it was probably someone’s pet they no longer wanted or couldn’t care for.

Hastur Mckay, administrator of the WRES said they are seeing the dumping of snakes into the outdoors more often especially in spring as people think the creatures will survive with the warmer weather, although the WRES says these snakes are really creatures of very hot conditions.

Dr. Adrian Walton from the Dewdney Animal Hospital in Maple Ridge, B,C., quoted by Global News says it is the fourth abandoned snake that he knows of this year alone.Surrey and Maple Ridge are considered part of the greater Vancouver area in the lower mainland of B.C.

Members of the group estimated the snake, under a metre in length, to be between 3 and 5 years old, but undersized for its age suggesting it had not been well cared for by its owner.

Ball pythons get their name from the habit of curling into a ball when frightened or threatened. Adult ball pythons typically grow to under two metres.

According to a spokesman for Metro Vancouver, the snake is now being cared as a suitable permanent home is found for it.

Across the country in Toronto, Animal Services say that between January 2017 and July 2019, they had recovered some 28 stray snakes.