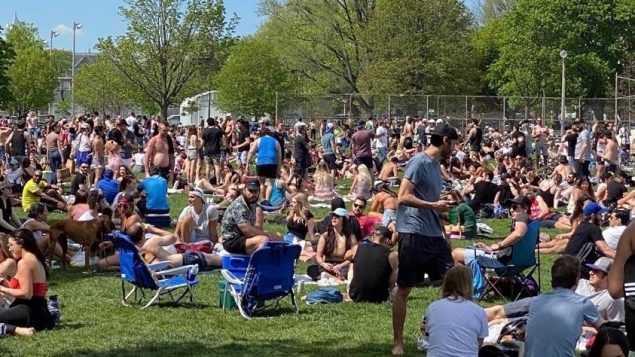 Dr. Eileen de Villa, the city's chief medical officer of health, condemned crowding in a popular downtown park on Saturday, calling the behaviour 'selfish' and noting that cases of COVID-19 in Toronto are still on the rise. (Dr. Eileen de Villa/Twitter)

Toronto Mayor John Tory has issued an apology for failing to properly wear a mask after thousands of people gathered in a popular downtown park, violating the city’s physical distancing bylaw on Saturday.

Tory condemned the crowds Saturday night, but faced criticism after photographs of him talking to people at Trinity Bellwoods Park with his face mask pulled down appeared on social media.

This is how you set an example? Tory at Trinity? pic.twitter.com/YFE0bBReLu

“I fully intended to properly physically distance but it was very difficult to do. I wore a mask into the park but I failed to use it properly, another thing I’m disappointed about.” Tory said in a statement Sunday.

“These were mistakes that I made and as a leader in this city, I know that I must set a better example going forward.”

I want to apologize for my personal behaviour yesterday. I visited Trinity Bellwoods Park to try to determine why things were the way they were. pic.twitter.com/2x1OIrnKI9

Despite the huge crowds, city by-law officers issued just four tickets at the park on Saturday, and 14 tickets across all city parks.

Dr. Eileen de Villa, the city’s medical officer of health, condemned the crowds, calling the behaviour of people there “selfish and dangerous.”

“I get it. It was a beautiful day …I fully understand and that’s why we opened the parks so people could get out there and enjoy the weather. But the images I saw — we just can’t have that right now because there is still a deadly virus among us,” Ford told reporters.

Ford urged Ontario residents to get tested for COVID-19 if they think they need it, even if they are asymptomatic.