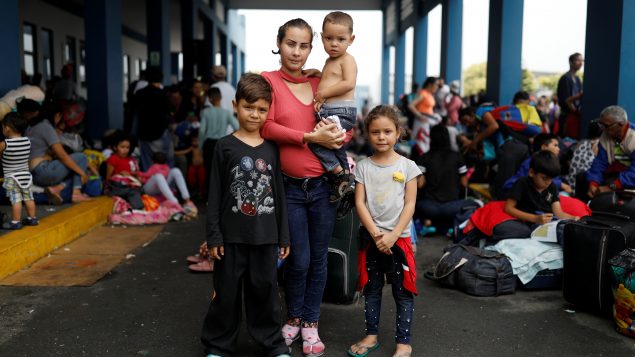 Venezuelan migrant Genesis Valera, 27, who is six months pregnant, poses for a picture with her children Sebastian, 7, Claudia, 6, and Isaias, 2, while they wait to process their documents at the Ecuadorian-Peruvian border service centre, before they continue their journey to Piura, on the outskirts of Tumbes, Peru, June 16, 2019. (Carlos Garcia Rawlins/REUTERS)

Canada will provide $27 million to help millions of Venezuelan refugees and migrants fleeing their country during a global pandemic that has put new strains on the international community’s ability to respond to South American nation’s economic and political crisis.

International Development Minister Karina Gould made the announcement Tuesday during the online International Donors Conference in Solidarity with Venezuelan Refugees and Migrants in Latin America and the Caribbean.

The pledging conference, was convened by the European Union and Spain, with the support of Canada, Norway, the UN Refugee Agency (UNHCR) and the International Organization for Migration (IOM). It received pledges amounting to $2.79 billion US, including $653 million US in grants.

The conference, which brought together over 40 countries, sought to mobilize aid for one of the largest external displacement crises in the world. 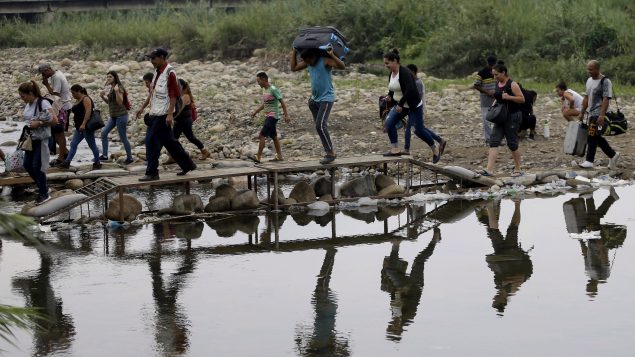 The UN estimates that more than five million have fled Venezuela’s ongoing political unrest and economic collapse to seek safety and protection across the world. Around 80 per cent of them are being hosted by countries across Latin America and the Caribbean.

The pandemic is making their plight even more desperate. According to UN officials, Venezuelan refugees and migrants now face multiple challenges, including the loss of daily incomes needed to cover basic needs such as shelter, food and health care.

“As the world is grappling with the COVID-19 pandemic, we cannot forget about ongoing humanitarian crises,” Gould said in a statement. “The situation in Venezuela and for over five million Venezuelan refugees and migrants is extremely dire.” 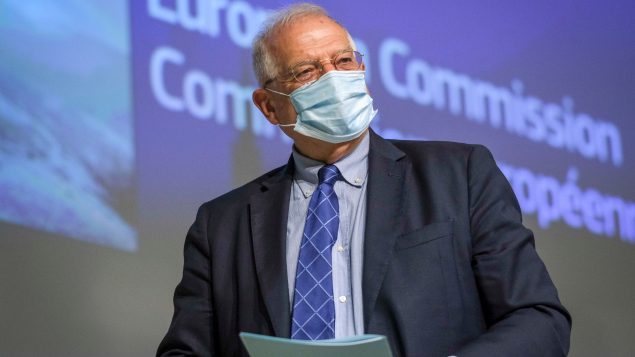 European High Representative of the Union for Foreign Affairs, Josep Borrell, is seen during a video press conference at the end of International Donors’ Conference in solidarity with Venezuelan refugees and migrants in the countries of the region, in the context of the coronavirus pandemic in Brussels, Belgium May 26, 2020. (Olivier Hoslet/Pool via REUTERS)

Migrants and refugees are especially vulnerable to the impact of COVID-19 because of their limited access to health care and paid work, and the heightened risks they face of abuse and exploitation, she added.

UNHCR and the IOM welcomed Canada’s contribution and those from other donors, saying they offered “a ray of hope to many families who have lost everything they had.”

“These contributions will make a real difference to the lives of refugees and migrants from Venezuela, who have been extremely hard-hit by the pandemic,” said UNHCR–IOM Joint Special Representative Eduardo Stein.

“Countries in the region have responded to this unprecedented displacement with remarkable solidarity and hospitality, while facing significant challenges to their own economies and the social fabric of their societies.”

As the pandemic continues to spread through Latin America, many refugees and migrants from Venezuela could be left out of health and social welfare programs, especially those in irregular situations, said Stein. 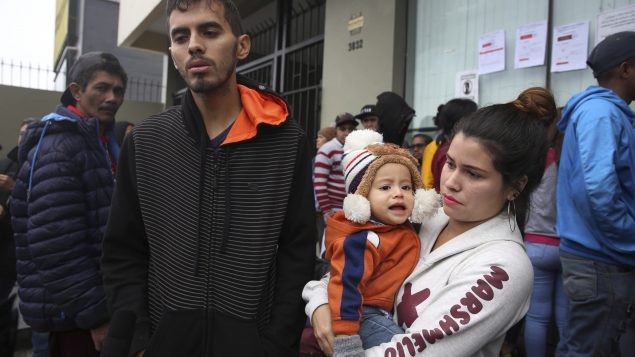 Venezuelan migrant couple Johan Alvarez and Daniela Tovar, with their son Matias, speak during an interview outside a refugee office run by Peru’s Special Commission for Refugees Executive Secretariat, where they wait to apply for refugee status in Lima, Peru, Tuesday, June 18, 2019. (Martin Mejia/AP Photo)

The situation will likely continue to deteriorate for millions of migrants who, in addition to being displaced from their homes, already face malnutrition and shortages of clean water and basic hygiene, he added.

“We’re particularly worried about women, girls and boys who are at even greater risk of violence, abuse and exploitation,” Messenger said.

A coalition of regional humanitarian organizations across 17 countries in Latin America and the Caribbean launched a fundraising appeal last November, saying it needed over $1.4 billion to respond to the Venezuela crisis. Barely a tenth of that amount had been raised prior to Tuesday’s pledging conference.

“The humanitarian response for Venezuela was already underfunded, and that’s why these pledges are needed now more than ever,” Messenger said.

Mike Lake, Conservative Party shadow minister for international development, could not be reached for comment in time for publication.