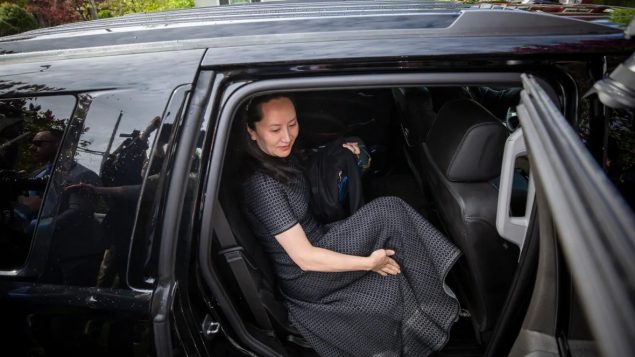 Huawei executive Meng Wanzhou, (shown May 2019) is free on bail, but wears an electronic monitor but is free to move around Vancouver from her mansions there. The Canadians have spent over 500 days in harsh conditions in Chineses jails ( Ben Nelms-CBC)

Detained, but free on bail with conditions, she had been fighting an extradition request from the U.S on charges of fraud. Justice Heather Holmes rejected defence arguments and ruled that the important issue of “double criminality” held, i.e., that the alleged crimes in the U.S., would also have been crimes in Canada.

Since her arrest in December 2018 in Vancouver, China has loudly demanded she be released and has retaliated in the interval with the arrests of two Canadians on charges of suspicion of espionage, charges which are widely viewed internationally as reprisals for Meng’s detention. The two have been held in Chinese prisons now without consular visits for weeks, and there is now added concern about their situation.  China also instituted trade restrictions on Canadian agricultural products. 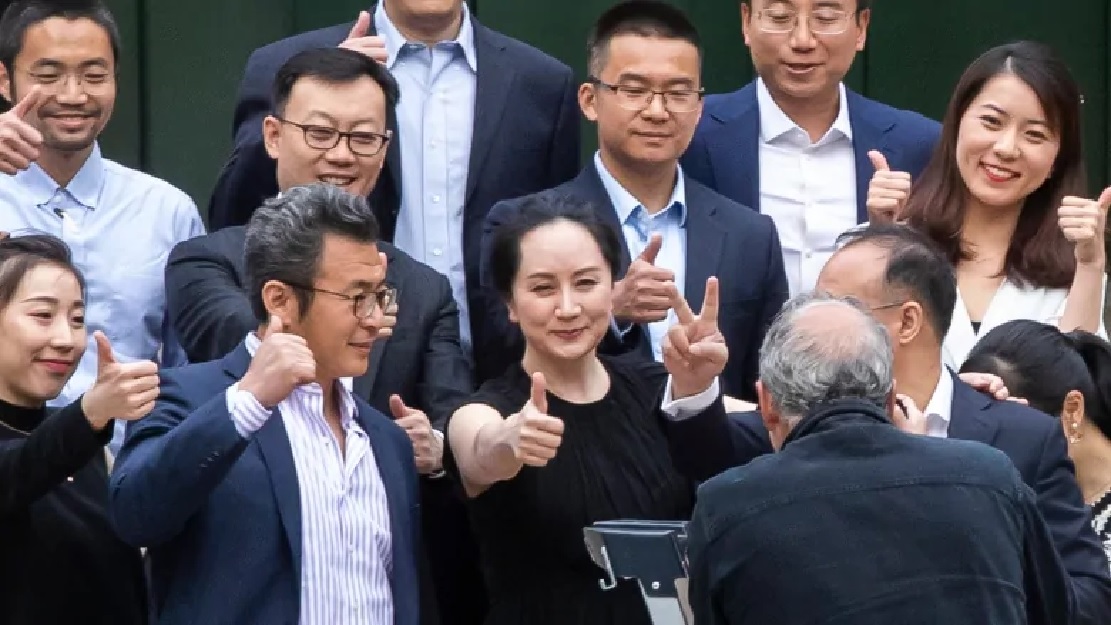 In a highly unusual move, Huawei chief financial officer Meng Wanzhou staged a posed ‘victory’ photo with friends and family on the steps of the B.C. Supreme Court building in downtown Vancouver, on the weekend before the ruling on her extradition case. (Ben Nelms/CBC)

As could be expected China has reacted angrily to the court decision.

China has insisted that the issue is that the U.S is out to harm tech giant Huawei, and using Canada to help it.

The Communist Party-run Global Times said the ruling shows Canada has “completely surrendered its self-proclaimed judicial and diplomatic independence to US bullying”.

It added that the “unjustified” decision makes Canada “a pathetic clown and a scapegoat in the fight between China and the U.S.”

An editorial in another Communist Party outlet, China Daily, again claimed the situation was due to attempts to stifle Huawei along with other economic issues saying, “Ottawa is trying to portray itself as innocent of any wrongdoing, claiming it is a legal matter that should be left to the courts. Yet its move to arrest Meng was quite clearly politically motivated — or perhaps it would be more accurate to say economically motivated, since it came when it is was engaged in trade talks with Washington.”

Zhao Lijian, Chinese Foreign Ministry spokesman said in his regular press meeting today, “The US and Canada, by abusing their bilateral extradition treaty and arbitrarily taking compulsory measures against a Chinese citizen, has gravely violated the lawful rights and interests of the said Chinese citizen. The purpose of the U.S. is to bring down Huawei and other Chinese high-tech companies, and Canada has been acting in the process as an accomplice of the U.S. (…) We once again urge Canada to take China’s solemn position and concern seriously, immediately release Ms. Meng Wanzhou and ensure her safe return to China, and not to go further down the wrong path”.

Another quote in the state sponsored media labelled Meng as a “hostage” in the dispute between the U.S. and China while also saying this will worsen already bad Canada-China relations. There were additional hints at further trade retaliation against Canada for taking this “wrong path.”

Canada has repeatedly indicated that the judiciary is independent and separate from politics, something, Prime Minister Justin Trudeau said that China “doesn’t seem to understand.”