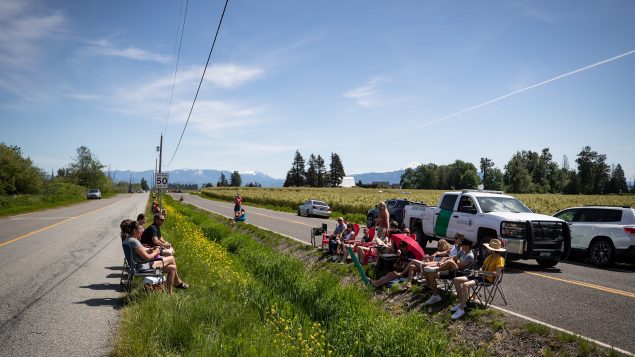 Three generations of the Nunnikhoven family including those who live in Aldergrove, B.C., left, and those who live in Lynden, Wash., right, spend Mother's Day together separated by a ditch along the Canada-U.S. border, as a U.S. Border Patrol vehicle drives past them, in Aldergrove, B.C., on Sunday, May 10, 2020. The stretch of international border approximately an hour southeast of Vancouver has become a popular meeting spot for families and loved ones separated due to the closure of the Canada-U.S. border to non-essential travel due to COVID-19. (Darryl Dyck/THE CANADIAN PRESS)

Prime Minister Justin Trudeau says the federal government is looking into possible changes to the pandemic restrictions on the Canada-U.S. border that could allow close family members to reunite.

“We have been looking at ways at perhaps allowing close family members — children, spouses or parents of Canadian citizens or permanent residents — to be able to reunite under strict conditions through a slight modification of the directives for the Canadian Border Services Agency,” Trudeau told reporters during his daily briefing in Ottawa on Friday.

“This would not change the approach on closing the borders until the end of June, and depending on discussions, beyond. But it is looking at, can we support families that are going through extremely difficult times?”

That agreement was extended in April by 30 days and it was set to expire on May 21, and again until at least June 21.

While truck drivers and essential workers have been able to cross the border throughout the lockdown, thousands of Canadians have been unable to visit family members in the U.S. or have their American relatives visit them in Canada.

But the idea of relaxing the restrictions has received mixed reviews from provincial premiers.

“There are a number of premiers who feel that, for reasons of compassion, we should and could move forward with this measure. There are others that expressed a certain amount of concern about it,” Trudeau said.