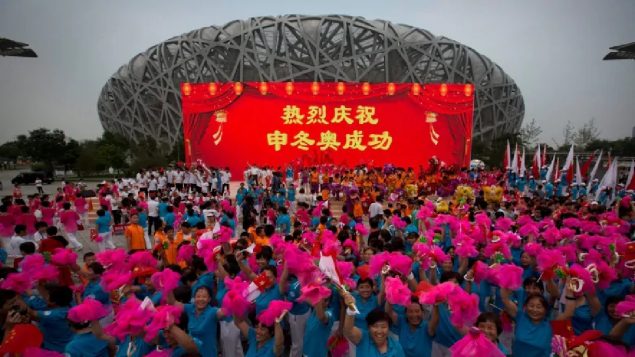 Beijing hosted the 2008 Summer Olympics at an estimated cost of $40 billion. It was not without controversy over China's actions in Tibet, and human rights issues. Canada's Prime Minister Stephen Harper, and Germany's Angela Merkel did ont attend the opening ceremonies but both sent athletes. (Mark Schiefelbein-AP)

When China was awarded the 2022 Winter Olympics back in 2015,  Beijing became the first city to hold both a Summer (2008) and Winter Games.

Since then China has risen in military and economic power, surpassing the U.S. as the world’s leading economy and world’s largest manufacturer.  It also began asserting its muscle both internally, with allegations of human rights violations, and internationally such as with the occupation of the South China Sea.

Any criticism has been met with economic penalties such as banning Norwegian salmon when the Nobel Peace Prize was awarded to dissident writer Liu Xiaobo. It banned Australian beef and imposed heavy tariffs on barley after Australia called for an international inquiry into the origins of the coronavirus.

Canada has seen reprisals for the detention of Huawei executive Meng Wanzhou on an extradition request from the U.S.  Canadian agricultural exports worth billions of dollars were banned and two Canadians in China arrested in what most see as a reprisal for Meng’s detention in what has been labelled as “hostage democracy”

Against the backdrop of China’s actions and attitude there are now calls for countries to boycott the 2022 games, which China would promote as a crowning demonstration of its place as a world leader.

Former Canadian diplomat posted to Beijing and later commissioner to Hong Kong, John Higgenbotham says now its time for Canada to go beyond mere words of disapproval. Quoted in the Globe and Mail he said of the 2022 games, “China wants them badly as the latest pageant of national power and prestige”, adding that a boycott could be organised if China doesn’t back down on Hong Kong.

With measures such as the arrests of Canadians Michael Spavor, and Michael Kovrig, threats against Hong Kong, and other issues, Canadian and world attitudes towards China have declined markedly.

In November 2019, former Canadian ambassador to China, David Mulroney asked how Canada could plan to send athletes to China in light of revelations about mass detentions of China’s Uyghur minority.

In an email to RCI she says Canada should work with other countries if there is to be a ban and a message sent. “There are numerous countries including Canada that would consider a boycott given the issues of Hong Kong and the Uyghurs. In addition, it would be unthinkable to plan on attending a big Olympic celebration in China as they continue to hold our kidnapped and unjustly incarcerated Canadians. In this connection, we should also consider sending home the Chinese athletes who are training here for the Winter Olympics”.

Many think the absence of several countries at the Winter Games would have a more profound affect on demonstrating displeasure with China as there are many fewer countries that compete in these games compared to the Summer Olympics, thus any absences would be more noticeable.

Taking a different view however is another former diplomat with Chinese experience, Colin Robertson says the ‘cost’ of the diplomatic action is really borne by the athletes.

He wrote to RCI saying, “The Olympic movement is designed to create bonds between peoples through sporting excellence. For a boycott to be effective it would have to include a significant group of nations eg G7 + NATO and partners. Did boycotting the Moscow Olympics in 1980 get the Soviets out of Afghanistan? (and it led to the tit-for-tat boycott of the 1984 Los Angeles Olympics). Did the boycotts by African nations over South African apartheid speed its demise”?

Chinese reaction to a potential boycott by Canada with or without other countries has so far elicited little concern. One scholar at Peking University said that it wouldn’t have much of an effect on China

In the meantime, the fate of the  two Canadians still detained in what are believed to be deplorable conditions, and the concerns over the 300,000 Canadians in Hong Kong weigh heavily in any decision.  As for whether a boycott may be decided upon. The Globe and Mail posed the question to the Foreign Ministry which passed it on to Canadian Heritage which in turn said such a decision would lie with the Canadian Olympic Committee which in turn did not respond to the Globe’s request.