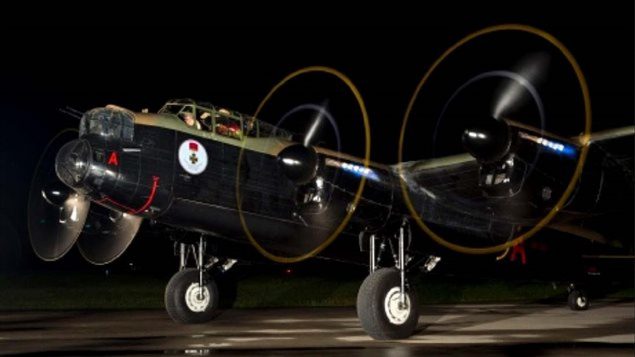 This is what the evening may have looked like in June 1944 for the crew of VR-A. This restored Lancaster is one of two still flying. The Canadian Warplane Heritage Museum bomber was painted in the call signs and colours of Mynarski's plane and after years of careful restoration has dedicated the historic aircraft to him. ( CWHM)

It is difficult, no, really impossible, for most of us to imagine climbing into a thin, noisy, cramped aluminium tube and flying hours in freezing air in total darkness to a place where others are doing their best to kill you. And then doing it again, night after night.

A few days after D-Day, the seven man crew of a Canadian built Lancaster bomber prepared for a mission to bomb a rail yard in Cambrai, France.

For the crew of 419 ‘Moose” Squadron, the night flight aboard KB726, a Lancaster Mk.X  would be their 13th mission. and they’d be over the target on the 13th.

Flight Sergeant Andrew “Andy” Mynarski, 27, of Winnipeg was the mid-upper gunner, his close friend Pat Brophy was rear gunner. The significance of the numbers was in the back of their minds before the flight and Mynarski had found a four-leaf clover in the grass near the planes. With its supposed power to bring good luck, he gave it to his friend before the flight who apparently tucked it under his flight helmet 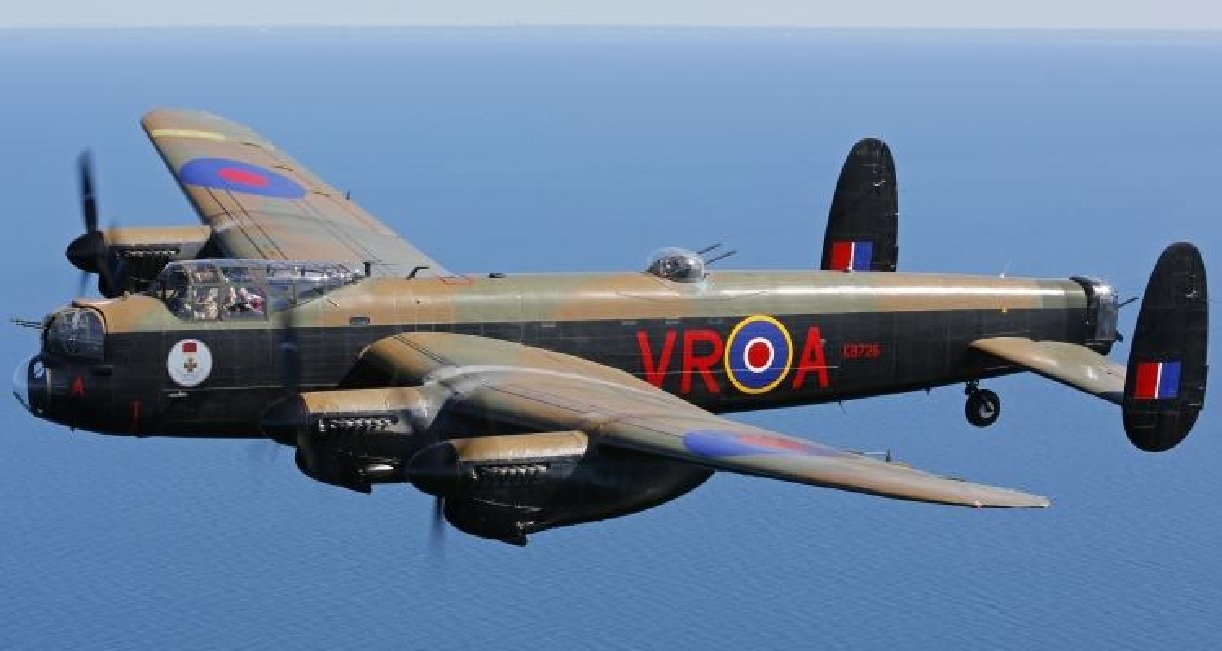 Later as the planes flew across the dark sky over the French coast there were a terrifying few moments when KB726 was caught in searchlights, but the pilot managed to dive and twist the plane out of the beams. Shortly afterward however, as jJune 12  passed into the 13th, a German nightfighter latched on to the bomber and raked the wing and fuselage with shells. The hydraulics were shot out and caught fire soon taking out the port engines which had begun to flame as well. The hydraulic lines in the mid-section to the rear were also shot with the spilling liquid having ignited and combined with the wind rushing through the crippled plane, turned the interior into a flaming inferno.

The pilot ordered everyone out, but without power the rear turret couldn’t be turned to allow Brophy to line up the doors with the fuselage and escape the turret. In his heightened state of adrenaline, Brophy had accidentally broken the manual handle. 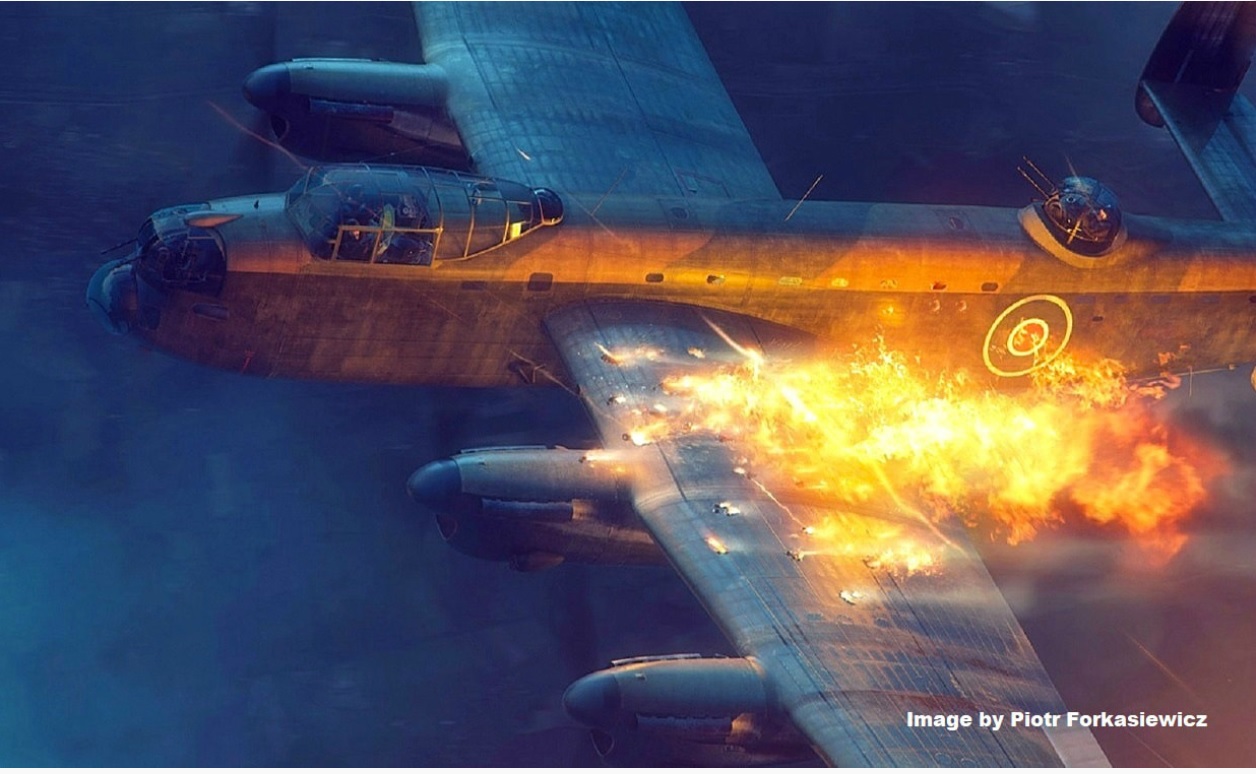 Seeing his buddy trapped, Mynarski climbed through the flames to try to free him. With his own clothes on fire he struggled in vain with the small fire axe to turn the jammed turret and open the doors, Brophy ordered his friend to save himself. Mynarski reluctantly agreed, crawled back through the craft, and turned and saluted before leaping out, his flight suit in tatters and still burning along with holes in the ‘chute. French civilians soon located him but he quickly succumbed to his burns. 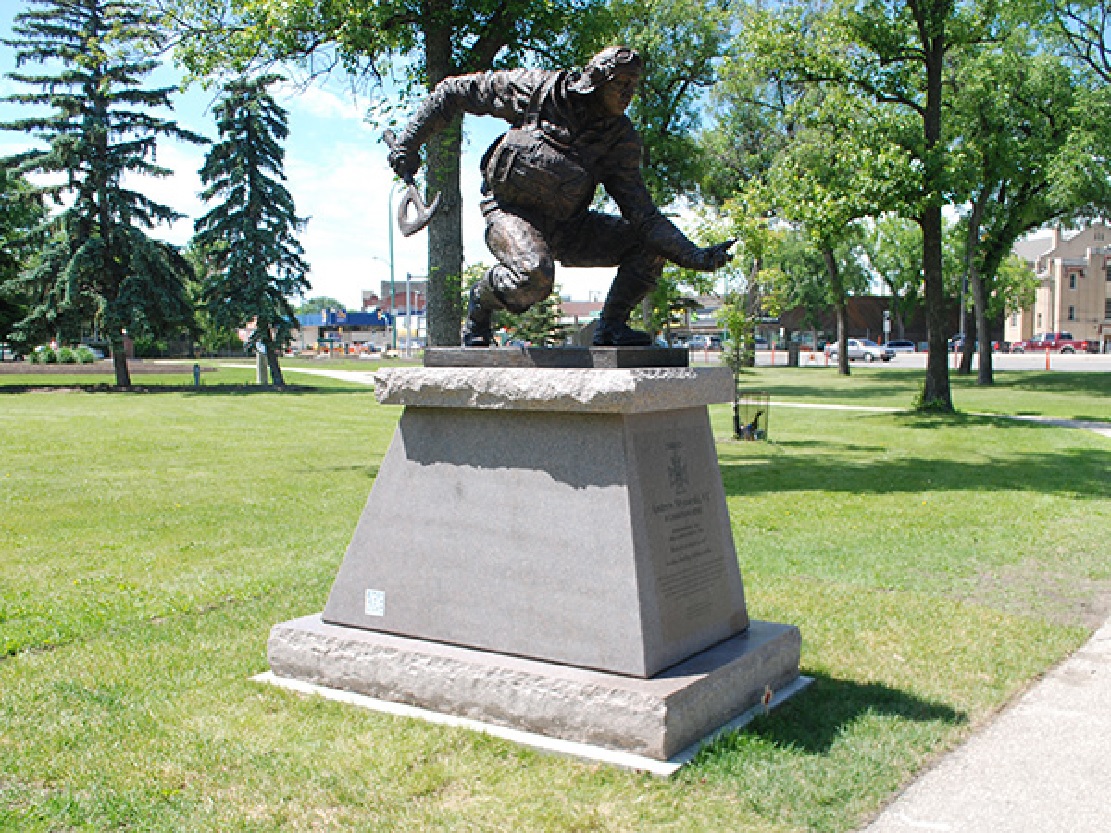 Statue in Winnipeg to Mynarski showing the bomber’s emergency axe in his hand kneeling to get at the blocked turret (Nathan Kramer, Manitoba Historical Society)

(…) Then I saw Andy. He had slid down from the mid-upper turret and made his way back to the rear escape hatch, about 15 feet from me, having received the same P signal to bail out from the skipper. He opened the door and was just about to jump when he glanced around and spotted me through the plexiglass part of my turret. One look told him I was trapped.  Instantly, he turned away from the hatch – his doorway to safety – and started towards me. All this time the airplane was lurching drunkenly as Art tried to keep it on an even keel without instruments. Andy had to climb over the Elsan chemical toilet and crawl over the tailplane spar, as there is no room at that part of the fuselage.

These cramped conditions forced him to crawl on his hands and knees – straight through the blazing hydraulic oil. By the time he reached my position in the tail, his uniform and parachute were on fire. I shook my head; it was hopeless. ‘Don’t try!’ I shouted, and waved him away. “Andy didn’t seem to notice. Completely ignoring his own condition in the flames, he grabbed a fire axe and tried to smash the turret free. It gave slightly, but not enough. Wild with desperation and pain, he tore at the doors with his bare hands. By now he was a mass of flames below the waist.

Seeing him like that, I forgot everything else. Over the roar of the wind and the whine of our two remaining engines, I screamed, ‘Go back, Andy! Get out!’ “Finally, with time running out, he realized that he could do nothing to help me. When I waved him away again, he hung his head and nodded, as though he was ashamed to leave – ashamed that sheer heart and courage hadn’t been enough. As there was no way to turn around in the confined quarters, Andy had to crawl backwards through the flaming hydraulic fluid fire again, never taking his eyes off me. On his face was a look of mute anguish. “When Andy reached the escape hatch, he stood up. Slowly, as he’d often done before in happier times together, he came to attention. Standing there in his flaming clothes, a grimly magnificent figure, he saluted me! At the same time, just before he jumped, he said something. And even though I couldn’t hear, I knew it was ‘Good night, Sir’.

The Lancaster hit the ground in a shallow dive and the bombs exploded on impact blowing the rear turret clear. Brophy miraculously survived. The other crew survived, with two captured, and three making it back to England

Brophy stayed in France working with the Resistance and only made it back to England after the war where he was finally able to testify that Mynarski could easily have saved himself, but instead chose to risk his life to save his friend. 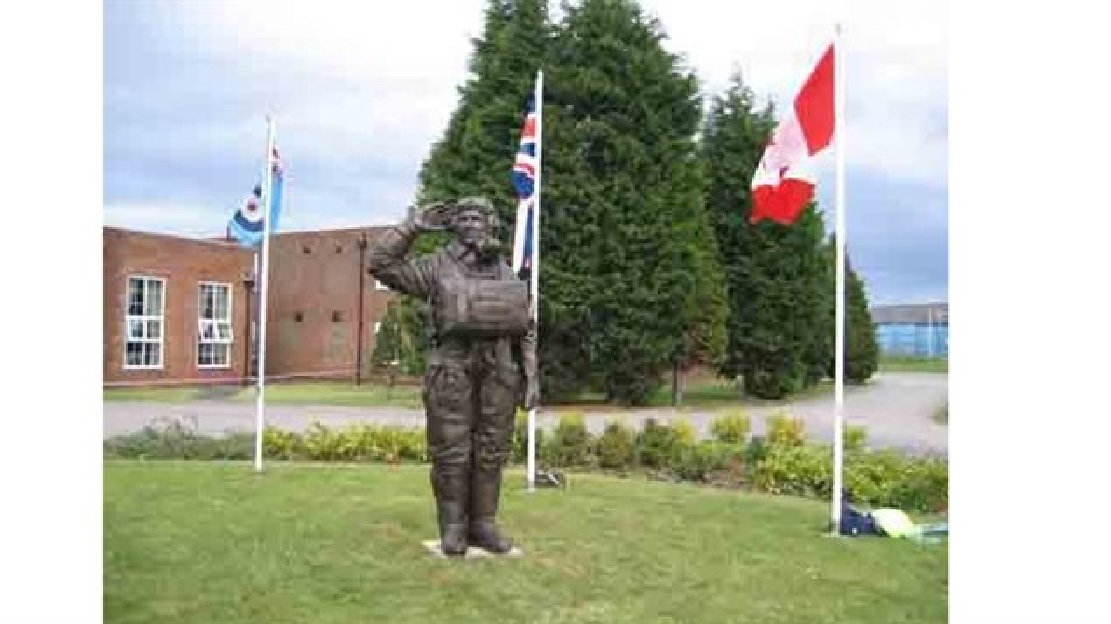 The 10-ft statue of P/O Mynarski giving a final salute to his trapped friend after trying desperately to free him. His clothes on fire he was forced to bail out but died of his burns. The statue is erected near the former aerodrome at Middleton-St George, now Durham-Tees Valley airport © http://www.wartimememories.co.uk/

In 1946, for this act of selfless courage Mynarski was posthumously promoted to Pilot/Officer and awarded the Victoria Cross, the highest honour for valour in the Commonwealth.

He was the first member of the R.C.A.F.to be so honoured.

That medal is on display at Air Command H.Q, in Winnipeg.  A statue of Mynarski was unveiled in 2005 at the former Middleton-St.George airbase (Durham Tees Valley airport), another is among the 14 busts of “valiants” memorial in Ottawa, and another in Winnipeg at the Vimy Memorial Park.