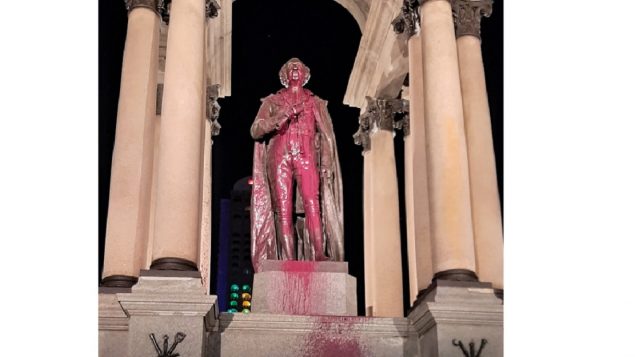 A media release by a person or group calling itself "Macdonald Must Fall" posted this image of their spray painting of the Macdonald statue in downtown Montreal. The latest is several similar attacks targetting the statue as representing a racist, white supremacist, colonialist

For the umpteenth time, anonymous vandals have  attacked the downtown Montreal statue of Sir John A Macdonald, the man who was the driving force behind the creation and development of the country and became the first Prime Minister.

This is the latest in some dozen or more attacks against the statue in the past three years, presumably by the same person or persons.

These acts have typically involved shooting paint up onto the statue, this time purple paint.  Because the statue is fairly high up, the vandals require a high pressure spray equipment for the attack.

In this latest attack. The statue vandalism was preceded earlier by crudely spray painted words on the base, “RCMP Kill Native women, kill Native men”. 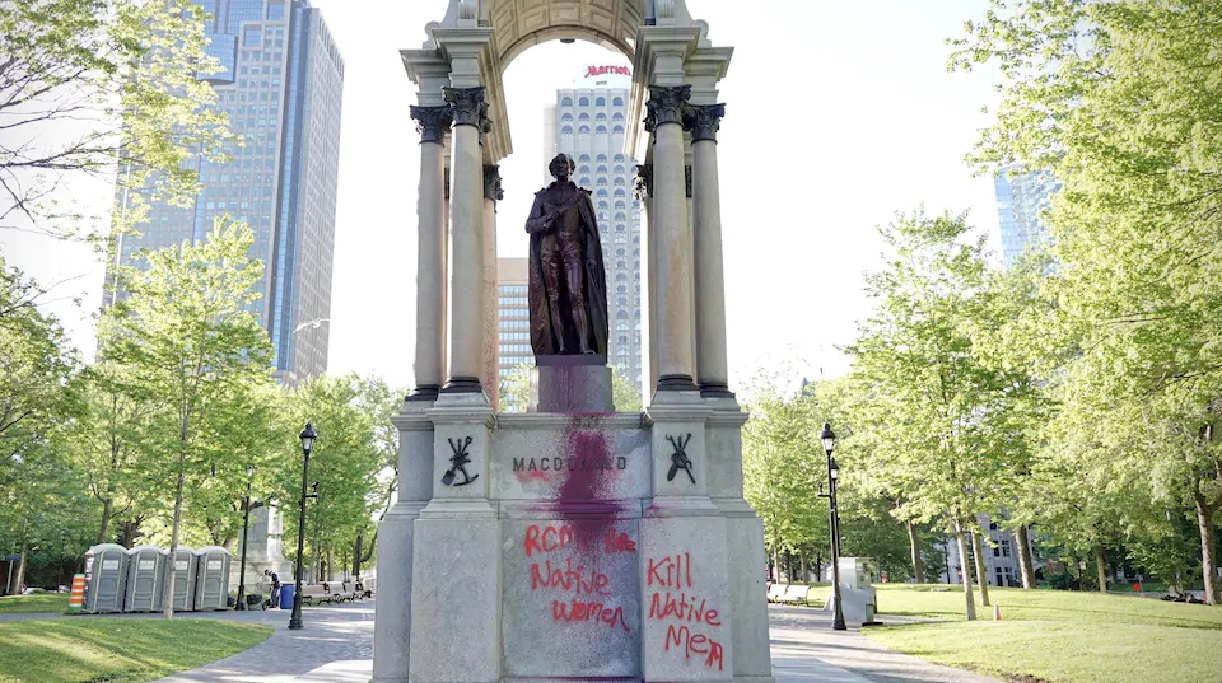 Calling themselves “anti-colonial vandals” in this latest attack, they have repeated labelled the nation’s founder and first Prime Minister as a racist as being responsible for the long and heavily criticised “residential school system” for indigenous children

That system saw indigenous children taken from their homes and placed in schools usually far away, where they were to be taught to fit in to mainstream society. Run by various religious orders, and lasting about 100 years, the schools were instead all too often the site of serious physical, emotional, and sexual abuse, which left long lasting pyschological scars on the students with repercussions felt in Indigenous society to this day.

The media release also noted “The anti-colonial statue vandals practiced physical distancing, wore masks, and washed their hands before and after the action”

A petition has been sent to Montreal Mayor Valerie Plante demanding the removal of the downtown statue.

She has proposed adding a contextual plaque to the statue, but a media release using the name Seamus Grewal, said it’s too late for that now, and if the paint is removed, the statue will  be defaced again.

Macdonald is also accused of anti-Chinese immigration policies, and of a deliberate starvation policy against Plains Indians.

Other groups are also calling for removal of statues to James McGill, founder of McGill University,in Montreal and Egerton Ryerson founder of Ryerson University in Toronto over accusations of racism.