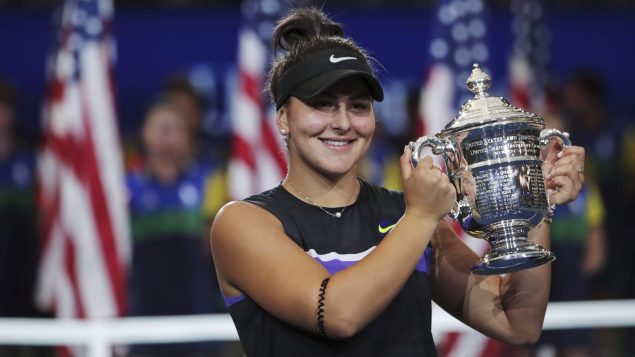 Bianca Andreescu, of Canada, holds up the championship trophy after defeating Serena Williams, of the United States, in the women's singles final of the U.S. Open tennis championships Saturday, Sept. 7, 2019, in New York. Andreescu says she is pulling out of the U.S. Open and won't defend her title because she hasn't had the opportunity to properly train because of the pandemic. (Charles Krupa/The Canadian Press/AP)

Biance Andreescu, the Canadian tennis star, plans to make the most of the opportunity to get back on the tennis court in response to the United States Tennis Association’s (USTA) decision to hold the U.S. Open in spite of concerns due to the COVID-19 pandemic.

“I can’t stress enough that health and safety of, not only the players but all of those involved in making tennis happen again this season is, and has always been of the utmost importance,” Andreescu, who captured her first Grand Slam title at last year’s U.S. Open, said in a tweet yesterday evening.

“I have no doubt that the USTA has come up with the best plans to insure our safety as we look to the return of tennis in 2020,” she added.

On June 16, New York state governor Andrew Cuomo announced that the U.S. Open would be held starting in August.

“We recognize the tremendous responsibility of hosting one of the first global sporting events in these challenging times, and we will do so in the safest manner possible, mitigating all potential risks,” the USTA wrote in a press release following Cuomo’s announcement.

However another Canadian tennis athlete is wary about the decision to hold the tennis tournament.

Hours before Andreesu’s tweets in support of having the tennis tournament, Canadian doubles specialist, Gabriela Dabrowski tweeted that she has many concerns about the USTA’s decision.

“It is impossible to control and enforce a bubble situation where players only move from the hotel to the venue and back,” Dabrowski said. “We don’t know who players will come into contact with and those that don’t obey put everyone else in the tournament at risk.”

My personal thoughts on the @usopen moving forward: pic.twitter.com/wLfoQPb2LN

Dabrowski also said that at least half of the players are not comfortable traveling to the U.S., and that there are concerns with undergoing multiple COVID-19 tests a week which has been a source of anxiety for some players.