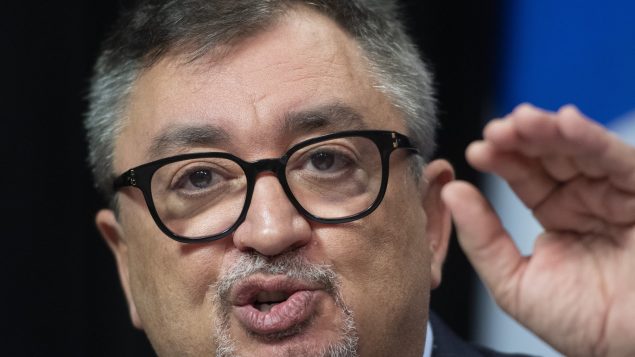 Horacio Arruda, Quebec director of National Public Health responds to reporters during a news conference on the COVID-19 pandemic, Wednesday, June 17, 2020 at the legislature in Quebec City. (The Canadian Press/Jacques Boissinot)

The Quebec government will no longer be giving daily COVID-19 updates after June 26, according to a press release from Quebec’s health ministry from yesterday.

Today, the provincial government gave its last daily COVID-19 update today, and will only provide weekly updates every Thursday, starting on July 2.

In an email to CBC News, Marie-Claude Lacasse, a spokesperson for Quebec’s health ministry said that the “decision was made due to the evolving epidemiological situation, which is stabilizing.”

Dr. Horacio Arruda, Quebec’s public health director, said today that there are not enough new cases or hospitalizations to be publishing an update every day. However he added that if there is a change in epidemiology and a situation where people must be informed, the Quebec government will communicate that information.

Quebec has had the highest number of cases of COVID-19 in Canada, with 55,079 cases, and 5,448 deaths according to the province’s latest update.

Since the beginning of the pandemic, the Quebec government has been giving daily COVID-19 updates on the amount of cases, deaths, hospitalization, and number of people in intensive care.

In response to the changes Quebec has made, Canada’s Prime Minister Justin Trudeau said during his press conference this morning that he hopes that Quebec Premier Francois Legault would continue to be transparent and open with Quebecers, and Canadians as he has been from the beginning of the pandemic.