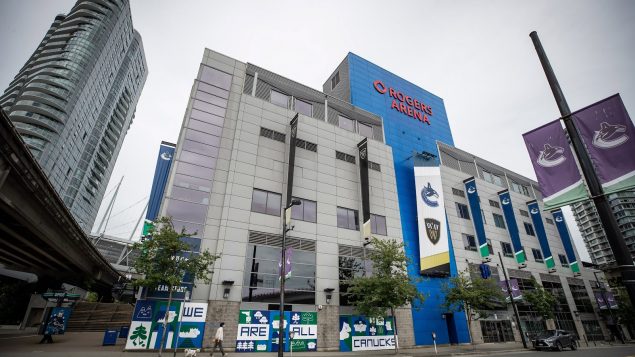 Rogers Arena, home to the Vancouver Canucks NHL hockey team, is seen in Vancouver, on Monday, June 22, 2020. The Vancouver Canucks say the team is officially out of the running to act as a hub city as the NHL considers where to hold its playoffs. (The Canadian Press/Darryl Dyck)

Vancouver out of running to become NHL hub city

The Vancouver Canucks announced in a tweet on Thursday that the city is no longer in the running to be a hub city for when the National Hockey League returns to play later this summer.

The Canucks thanked British Columbia’s Premier John Horgan, Minister Lisa Beare, Provincial Health Officer Dr. Bonnie Henry and their fans for their support as they worked through the opportunity to host NHL teams in Vancouver.

“Now we look forward and are very excited to welcome our Canucks players back for training camp at Rogers Arena in the coming weeks. An exciting finish to the season is just around the corner, and we can’t wait to drop the puck,” the Canucks tweeted.

British Columbia’s plan would have had a team stay in one hotel and travel to the hockey arena using private transportation. Teams would be responsible for their own COVID-19 testing and have to stay separate from the general population for a 14 days isolation period.

“I’m disappointed the NHL playoffs won’t be coming to Vancouver, but we will not bend the rules on public health guidelines and risk the progress we’ve made,” Horgan said in a tweet. “Protecting the health and safety of people in BC is our number one priority.”

With Vancouver out of the running, the only Canadian cities that have a chance at becoming an NHL hub city are Edmonton and Toronto.

The province of Alberta has made a push to have Edmonton become a hub city by selling the NHL, its players and their families on the benefits of playing in the city.

Training camps for the 24 teams that qualified for the playoffs are scheduled to open on July 10, and the playoffs will start later this summer. However, it is currently unclear when the NHL will decide which cities will host the league’s playoffs.

With files from CBC News, Karin Larsen and CBC Sports