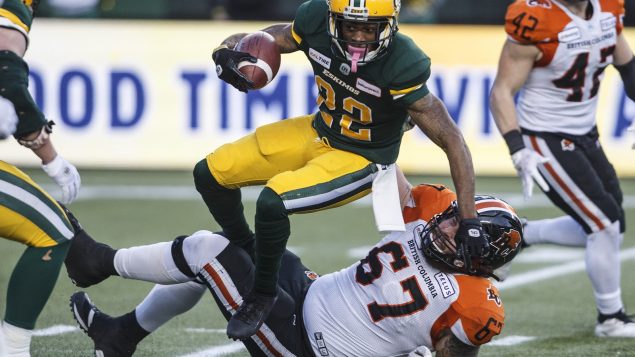 The Edmonton Eskimos, a team in the Canadian Football League (CFL), dropped one of their players over the weekend due to some homophobobic comments that were made on Twitter.

Christion Jones, who used to be wide receiver on the Edmonton Eskimos, made homophobic comments on Saturday, which was Global Pride Day.

“Man ain’t suppose to be with a man. A women is not supposed to be with another women,” Jones said in a tweet.

Jones’ tweet was immediately met with backlash from many, and in follow up tweets, he said that he would not apologize.

The Edmonton Eskimos then released Jones from their roster on Sunday.

“We stand by the LGBTQ2+ community and firmly condemn the language used by Christion Jones. There is no place for such commentary on our team,” the Edmonton Eskimo’s said in a statement. “Jones has been released from the roster.”

After being released from the team, Jones made another tweet apologizing for his statement.

“My words were deeply hurtful, painful and served zero purpose. I added to the struggle of a community, to live a life free of oppression of any kind. I sincerely apologize. I was wrong,” Jones tweeted.

The CFL also put out a statement on Sunday that said it strives to be inclusive, celebrate our differences and honour human rights.

“We in the CFL hold high the Diversity Is Strength banner. Our league makes no claim on perfection but it does strive to be inclusive, to accept and indeed celebrate our differences, and to respect and honour human rights… 1/2 #DiversityIsStrength

“There is no place in our league for commentary that disparages people on the basis of their religion, race, gender or sexual orientation,” the CFL said in a tweet. “As Pride Month continues, we stand with the LGBTQ+ community. We all need to say no to hate and yes to love.”

With files from CBC News and Jonathan Omstead