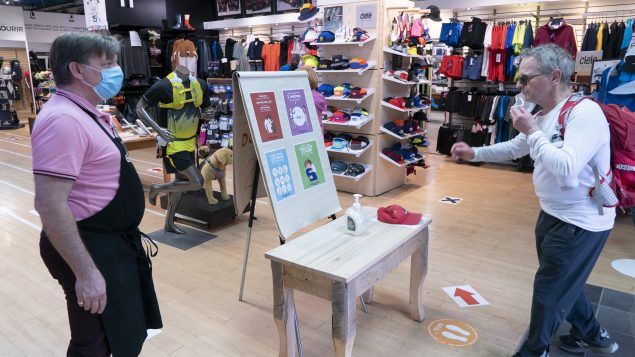 Store co-owner Daniel Beaupre greets customers at the Boutique Courir in Montreal, on Monday, May 25, 2020. Canada's economy saw a record 11.6 per cent drop in April and only a 3-per-cent rebound in May. (Paul Chiasson/THE CANADIAN PRESS)

Canada’s economy saw its largest monthly drop on record in April as it came to a near standstill due to the pandemic, but early indications point to a slight rebound in May as businesses began to reopen, the country’s national statistics agency reported Tuesday.

All 20 industrial sectors of the Canadian economy were down, producing the largest monthly decline since the series started in 1961, the data agency said.

The economy was 18.2 per cent below its February level, the month before the COVID-19 measures began.

However, as restrictions eased in May, the bounce-back in economic activity only amounted to a 3-per-cent increase in GDP, said Royce Mendes, executive director and senior economist at CIBC Capital Markets.

“That means as of May the economy was still operating almost 16 per cent below the level it was in February,” Mendes wrote in a research note to clients.

“To put that into perspective, during the worst of the financial crisis, the Canadian economy was not operating more than 5 per cent below it’s prior peak.”

The most pronounced were seen in some of the services sectors, particularly the accommodation and food services category, which fell a whopping 42 per cent on top of a 37-per-cent decline in March. 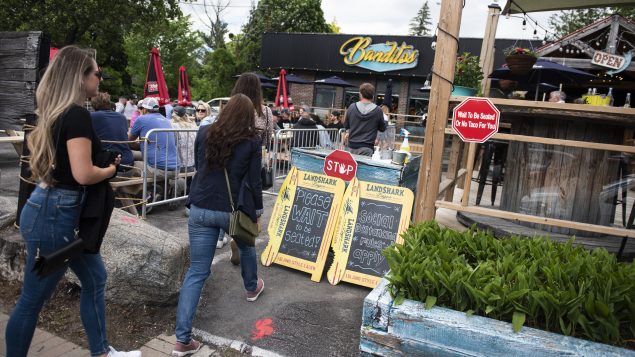 Patrons are led to their seats on the patio at Banditos, a restaurant in Ottawa, on its first day of reopening as Ontario moves into Stage 2 of its plan to lift lockdowns implemented in response to the COVID-19 pandemic, on Friday, June 12, 2020. The output of the accommodation and food services sector dropped 42.4 per cent in April, following a 37.1-per-cent decline in March. (Justin Tang/THE CANADIAN PRESS)

Bricks and mortar retailing felt a similar hit, but the declines were somewhat offset in the overarching retail category by a spike in online sales as Canadians stayed at home and ordered online, Mendes noted.

Manufacturing was down 22.5 per cent in April as many factories either shuttered or greatly reduced capacity in line with public health measures to slow the spread of COVID-19 — a move that hit the automotive sector hard as the output of motor vehicles plunged 97.7 per cent.

Even sectors that had increases in March weren’t spared in April like food manufacturing, which dropped 12.8 per cent in April as outbreaks at meat processing plants forced them to shut down.

Down too was construction by 22.9 per cent, concentrated largely in Ontario and Quebec, while a similar decline was noted in retail trade as brick-and-mortar stores stayed closed and consumers spent less while staying at home.

“From a forecast perspective, however, the combined impact from April’s deep drop, March’s revision, and the small estimated comeback in May is roughly a wash,” Porter wrote in an analysis note.

“We expect a bigger bounce in June as the economy re-opened more fully, which should contain the overall damage in the second quarter to around our estimate of a 40-per-cent annualized decline for the quarter.”