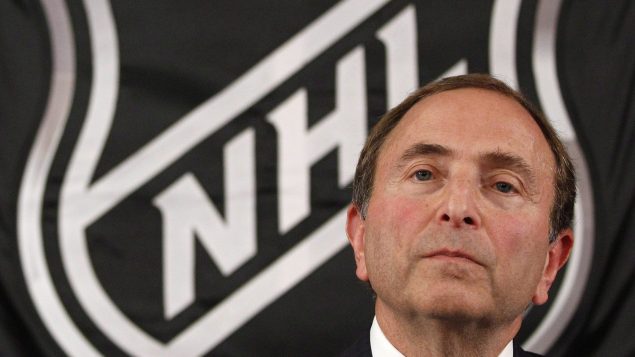 NHL commissioner Gary Bettman listens as he meets with reporters after a meeting with team owners in New York, Sept. 13, 2012. The National Hockey League (NHL) announced yesterday that 26 of its players have tested positive for COVID-19 since on June 8. (The Canadian Press/AP/Mary Altaffer)

The National Hockey League (NHL) announced yesterday that 26 of its players have tested positive for COVID-19 since on June 8, the start of the NHL’s Phase 2 of their safe return to play plan.

Since the beginning of Phase 2, which gives players the option to have on and off ice workouts in small groups, 250 players have reported to their teams training and practice facilities, and over 1,450 tests have been administered to that group of players.

“All Players who have tested positive have been self-isolated and are following [Center for Disease Control] and Health Canada protocols,” the league said in a statement. “The NHL will continue to provide regular updates on the number of tests administered to Players and the results of those tests.”

The NHL season has been paused since March 12 due to concerns from the COVID-19 pandemic. The league plans to allow its 24 teams who qualified for the playoffs start their training camps on July 10, and return to play later this summer.

The NHL has yet to announce any specific dates for when they will return to play and are currently in the process of deciding which cities will host the league’s playoffs.