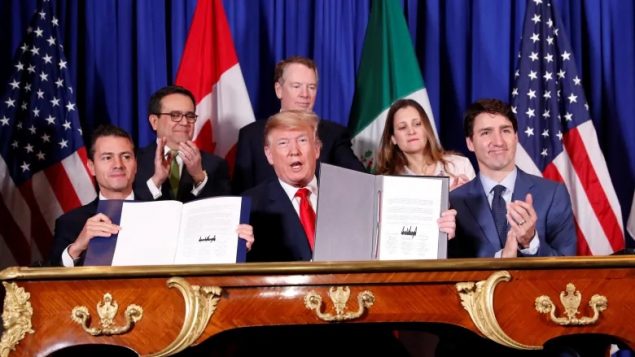 The revamped free trade agreement between Canada, the United States and Mexico came into effect on Wednesday as Canadians celebrated the country’s 153rd anniversary but gathering clouds threaten to dampen the mood in Ottawa, Washington and Mexico City.

“After three and a half years, which sometimes seemed like a decade or more of long, hard slug, we are finally able to say, ‘Team Canada, we did it!’” Deputy Prime Minister Chrystia Freeland said in a video message to Canadians.

“Our most important trade agreement, which gives us tariff-free access for 99.9 per cent of our exports to the United States and Mexico is secure.”

This #CanadaDay, the new NAFTA enters into force. This agreement preserves jobs and prosperity for workers and families in all three NAFTA countries. It is good for Canada and good for Canadian workers. Congratulations, Team Canada! pic.twitter.com/zTA2vBKDdf

The new trade deal, which came to replace the 26-year-old North American Free Trade Agreement (NAFTA), safeguards more than $2-billion a day in cross-border trade, Freeland said in a statement released by her office.

It includes tighter North American content rules for autos, new protections for intellectual property, prohibitions against currency manipulation and new rules on digital commerce that did not exist when NAFTA launched in 1994, an agreement U.S. President Donald Trump has lambasted as the “worst trade deal ever made.”

The new agreement also preserves NAFTA’s exception for culture, shielding Canada’s burgeoning cultural industries from the onslaught of their much more powerful American counterparts, helping to safeguard more than 650,000 jobs in those cultural industries, Freeland said.

The new trade deal known as CUSMA in Canada and USMCA in the U.S., removes NAFTA’s investor-state dispute resolution system, which has allowed large corporations to sue the Canadian government for hundreds of millions of dollars for regulating in the public interest, Freeland said.

“At a time of tremendous uncertainty in the global economy, this trade deal is more valuable and more important for Canadians than ever,” Freeland said.

But there are also signs that cracks are beginning to show in its foundation.

As the deal kicks in, the Trump administration is threatening Canada with new aluminum tariffs, and a prominent Mexican labor activist has been jailed, underscoring concerns about the pact’s crucial labour reforms. The risk of disputes among the three trading partners is growing, analysts say.

U.S. national security tariffs on imported steel and aluminum — including from Canada and Mexico — were a major irritant during CUSMA negotiations until a deal for exemptions was reached last year. But now, the office of the U.S. Trade Representative, Robert Lighthizer, is considering domestic producers’ request to restore the 10 per cent duty on Canadian aluminum to combat a “surge” of imports across the northern border.

Canadian Prime Minister Justin Trudeau on Monday told reporters that these would hurt both countries and raise materials costs for U.S. manufacturers.

Another source of disputes could be the energy sector, where the main U.S. oil and gas lobby has already complained that recent actions by Mexico favoring state oil company Pemex violate protections for private investors carried over from NAFTA.