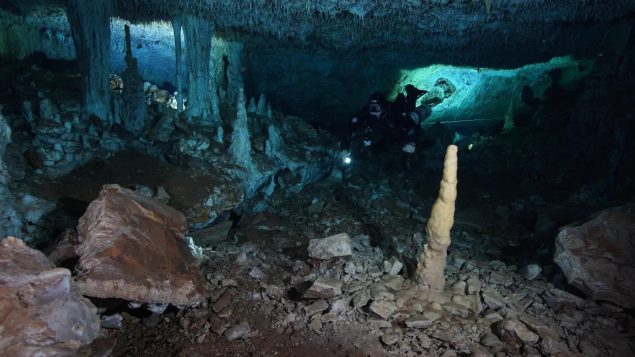 Divers explore the vast complex of tunnels and chambers using only a flashlight. It waouls have also been very risky for the indigenours people indicated that the ochre was a highly prized material worth the risk (CINDAQ.org)

Between 12,000 and 10,000 years ago, inhabitants of Mexico’s Yucatan Peninsula would have shared space with such things as sabre-toothed tigers and giant sloths. They would also have been using a system of limestone caves but very little is known about those early humans.

As the ice age retreated about 7,000 years ago,  the caves were flooded as the ground water level rose. 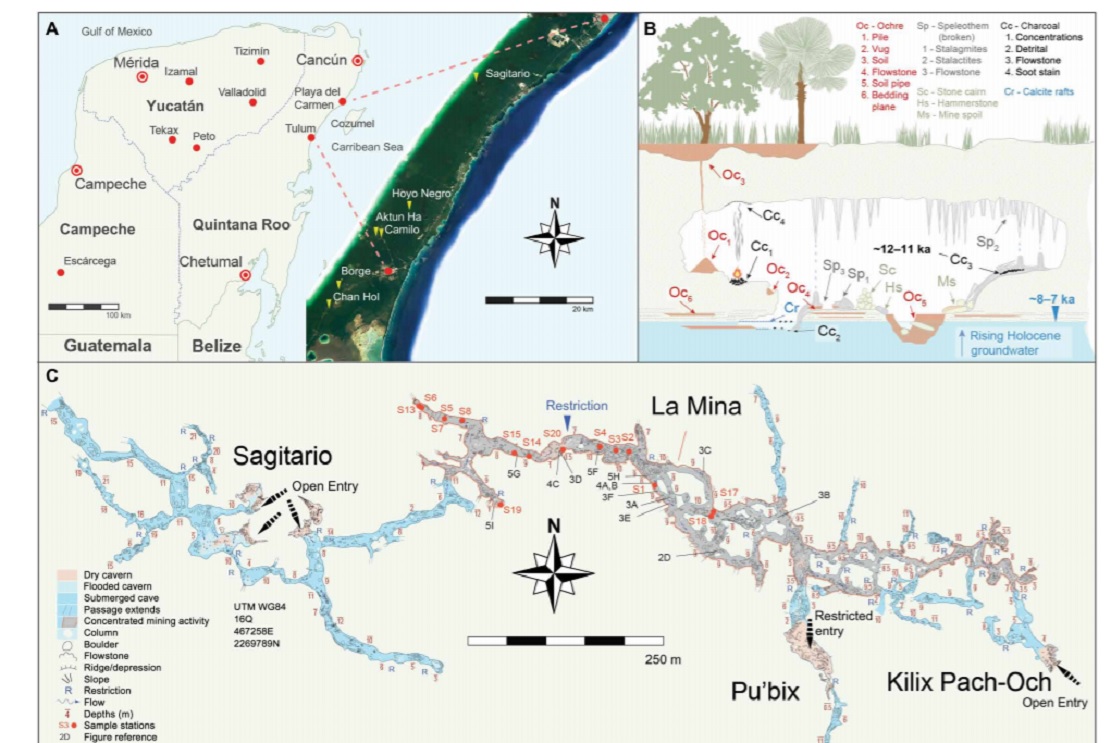 Now underwater explorers and a Mexican/American/Canadian team of archaeologists and researchers  have come across an astounding find.

That vast complex of underwater caves has fascinated divers and explorers for at least 25 years and they have slowly mapped out parts of the system. They had even found a few examples of ancient human remains. Even so there were areas that hadn’t been explored.

Canadian diver Fred Devos was teaching cave survey diving in the Quintana Roo complex when he entered a narrow unmarked passage in 2017. That eventually led to a series of new tunnels and chambers. Recent analysis has shown it to be a vast prehistoric mining complex they have named ‘la mina roja” (red mine) 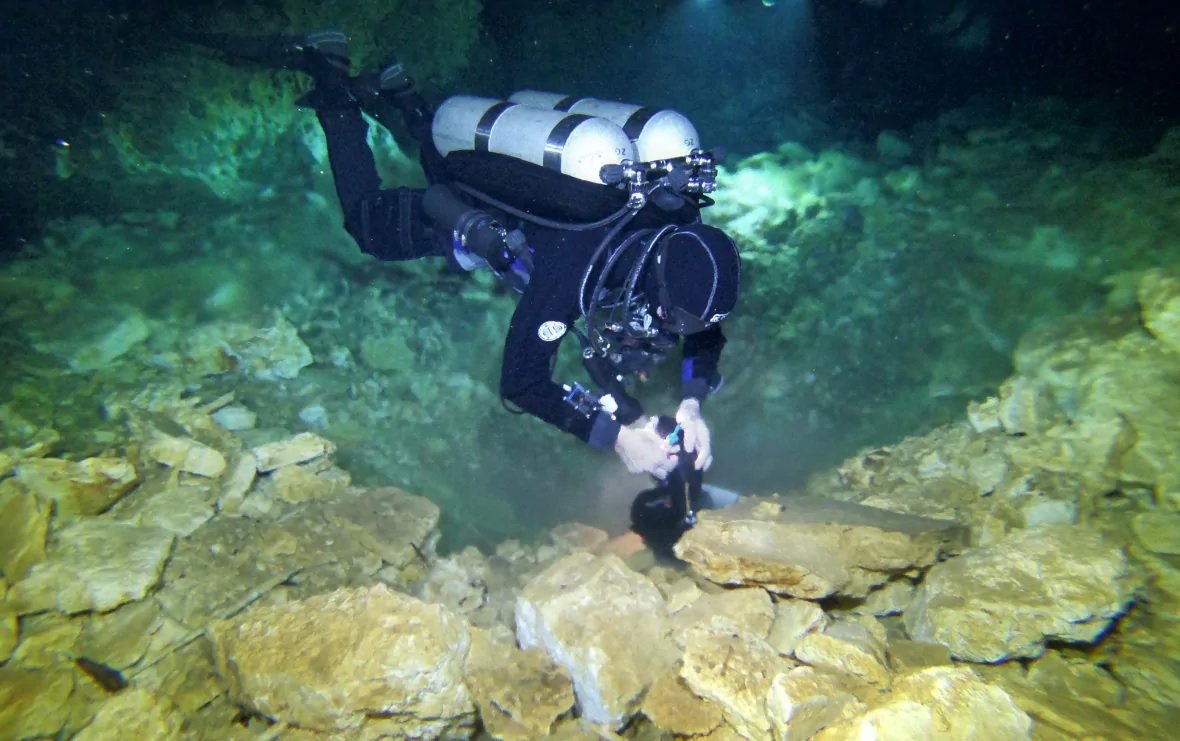 A diver examines an ochre mine pit and mining debris. (CINDAQ.ORG)

Evidence of ancient tools and fires (for light) were found leading to the significant new discovery and research into an unknown aspect of the local paleoindian life.  The research was published this month in the American Academy of Arts and Science journal Science Advances, under the title Paleoindian ochre mines in the submerged caves of the Yucatán Peninsula, Quintana Roo, Mexico” 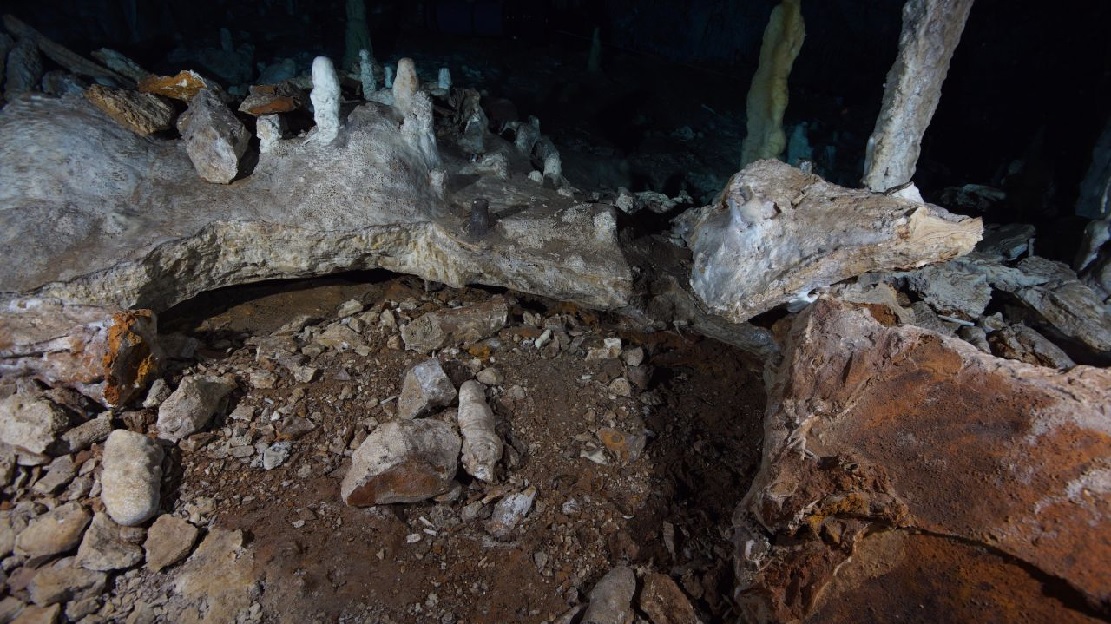 The ancient people would break through a layer of the cave floor to get at a deposit of ochre underneath (CINDAQ.org)

Little is known about the paleoindians of the region because thousands of years of hot humid conditions have destroyed most evidence of their existence. However the flooded caves have preserved a number of artefacts remarkably well.

Researchers at Hamilton Ontario’s McMaster University including geo-archeaologist Eduard Reinhardt note that the ochre was of high quality and traces of charcoal and soot were from burning of local high resin wood which would have been used as light in the pitch black caves and helped with the dating of the site.

Ochre has historically been prized by ancient civilizations around the world but why exactly these paleoindians would have risked their lives for it is not exactly known. Speculation ranges from material for rock painting, to an antiseptic, to sunscreen, to the tanning of hides.

Analysis shows it has a very high arsenic content so it is also possible it was used as a bug repellant or against parasites.

The research does indicate that the ochre mining was a large-scale operation and continued for about 2,000 years indicating an organised handing along of knowledge and skill from generation to generation. Researchers also say it shows that these early groups were involved in societal activities beyond mere survival and that the ochre had an important social context for the indigenous population.