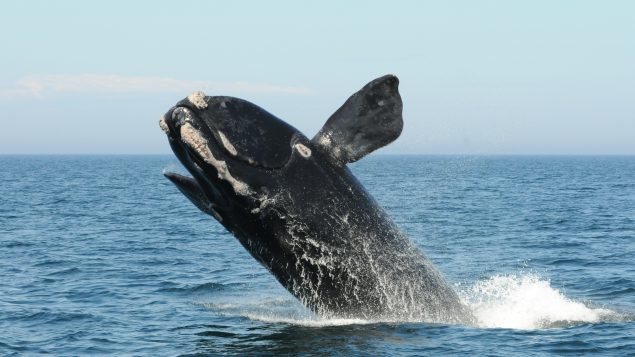 A North Atlantic righ whale (Catalog #4143) breaches in the Bay of Fundy on Aug. 21, 2012. Canada has joined an international alliance that works to protect 30 per cent of world oceans by 2030. (Marianna Hagbloom/Anderson Cabot Center, New England Aquarium. Collected under Canadian SARA permit)

Canada has joined a group of nearly two dozen other countries working to protect 30 per cent of the world’s oceans by 2030.

Minister of Fisheries, Oceans and the Canadian Coast Guard Bernadette Jordan announced Canada’s participation in the Global Ocean Alliance, founded by the United Kingdom in 2019, at a marine protection webinar on Thursday.

Canada aimed to conserve 10 per cent of the country’s marine and coastal areas by 2020 and has already surpassed this goal, reaching nearly 14 per cent by August 2019, Jordan said.

Canada surpassed its target of protecting 10% of our oceans by 2020, and now we’re signing on to a greater, global goal of #30×30. When we work together, we can deliver real results for Canadians and people around the world. https://t.co/siWypk17aI pic.twitter.com/7ie53iREOj

The federal continues to work toward its ambitious target of protecting 25 per cent of marine and coastal areas by 2025, working toward 30 per cent by 2030, Jordan said.

“Our largest potential is in the Arctic. We’re partnering with the Inuit to achieve this,” Jordan said.

Canada will work with other countries toward the adoption of new ambitious global biodiversity targets under the Convention on Biological Diversity at the 15th Conference of Parties in Kunming, China in 2021, the minister said.

The International Union for Conservation of Nature, one of the world’s largest organizations of conservation scientists, says protecting 30 per cent of the planet’s oceans is vital to keep ecosystems functioning.

A report by more than 100 economists released on Wednesday found that economic benefits of protecting at least 30 per cent of the world’s land and oceans outweigh the costs by a ratio of 5-to-1.

“Our report shows that protection in today’s economy brings in more revenue than the alternatives and likely adds revenue to agriculture and forestry, while helping prevent climate change, water crises, biodiversity loss and disease,” said Anthony Waldron, the lead author of the report and researcher focused on conservation finance, global species loss and sustainable agriculture.

“You cannot put a price tag on nature — but the economic numbers point to its protection.”

The report’s authors find that obtaining the substantial benefits of protecting 30 per cent of the planet’s land and ocean, requires an average annual investment of roughly $140 billion by 2030.

The world currently invests just over $24 billion per year in protected areas, the report said.