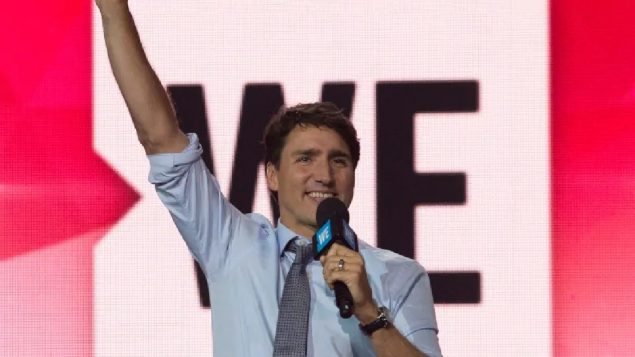 Prime Minister Justin Trudeau is under fire for his government's decision to award a contract to WE Charity, an organization with ties to himself and his family. The federal ethics commissioner is investigating and the opposition Conservatives suggest a criminal investigation is needed. If cited for an ethics violation, this would be the third for the Prime Minister (Adrian Wyld / Canadian Press)

Two national surveys by the non-profit Angus Reid Institute show that Liberal voters are still committed to Prime Minister  Justin Trudeau in spite of the current scandal over the WE Charity contract and generally no improvement for Canada on the world stage in spite of strong claims by Trudeau of bringing Canada ‘back’ onto the world stage.

The poll shows nearly an even split on approval after the scandal was revealed with 50 per cent of Canadians still approving of Justin Trudeau’s performance with 48 per cent disapproving. The latest rating is a drop from the 55 per cent approval in May as the COVID-19 crisis grew, but still much higher than the 33 per cent approval prior to COVID. Past Liberal voters are still almost unanimous in their approval in spite of the scandal (91%). 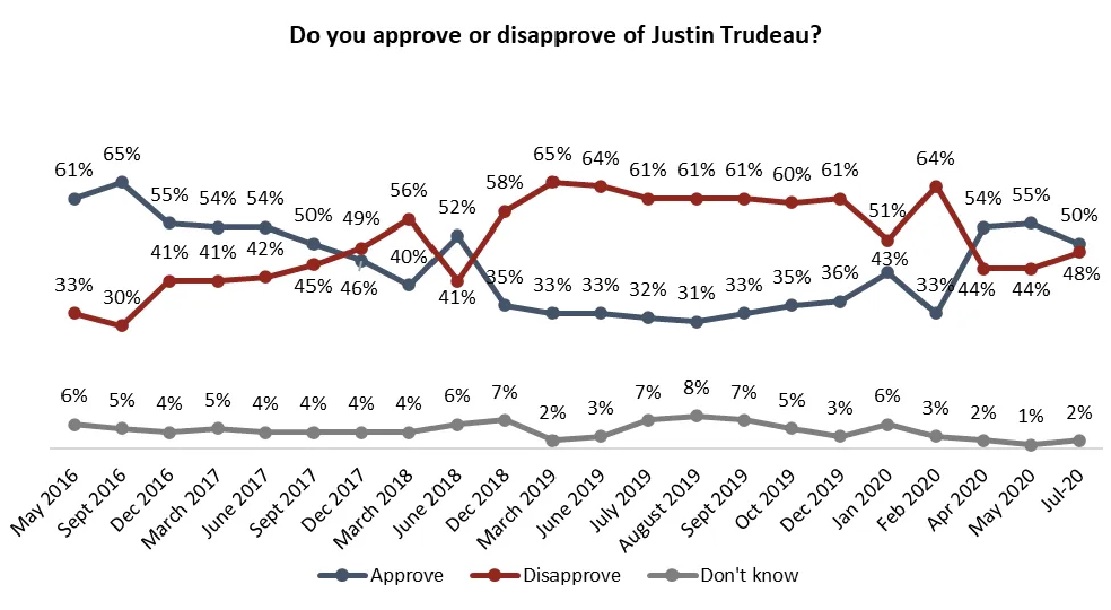 The latest poll is nuanced however by those expressing a ‘strong’ opinion.  Those strongly approving represented only 14 per cent of respondents but 34 per cent indicated strong disapproval.

The still high general approval seems to be based on Canadians concerns listed as challenged due to the COVID outbreak, the economy and health care ( 38%, 33%, 29% respectively).

However, one third of respondents who had voted Conservative in the last election listed ethics and corruption as a top concern (32%), much higher than past Liberal or NDP voters (4%, 7% respectively. 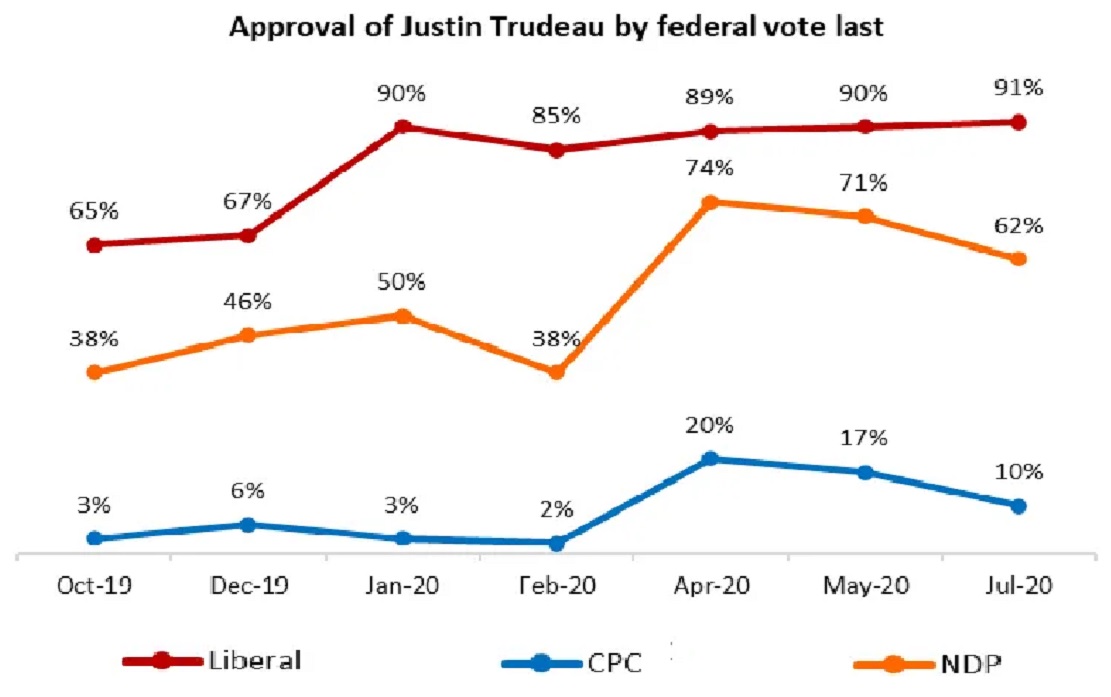 Liberal voters remain strongly behind the PM, while other voters are losing confidence (Angus Reid Inst)

The poll also found women approved of Trudeau at a higher rate than men.

“Canada is back”- maybe not so much

The approval rate remains even as another poll shows that Canadians generally think Canada’s place and reputation on the world stage has not changed in the five years since the Prime Minister announced “Canada is back”. 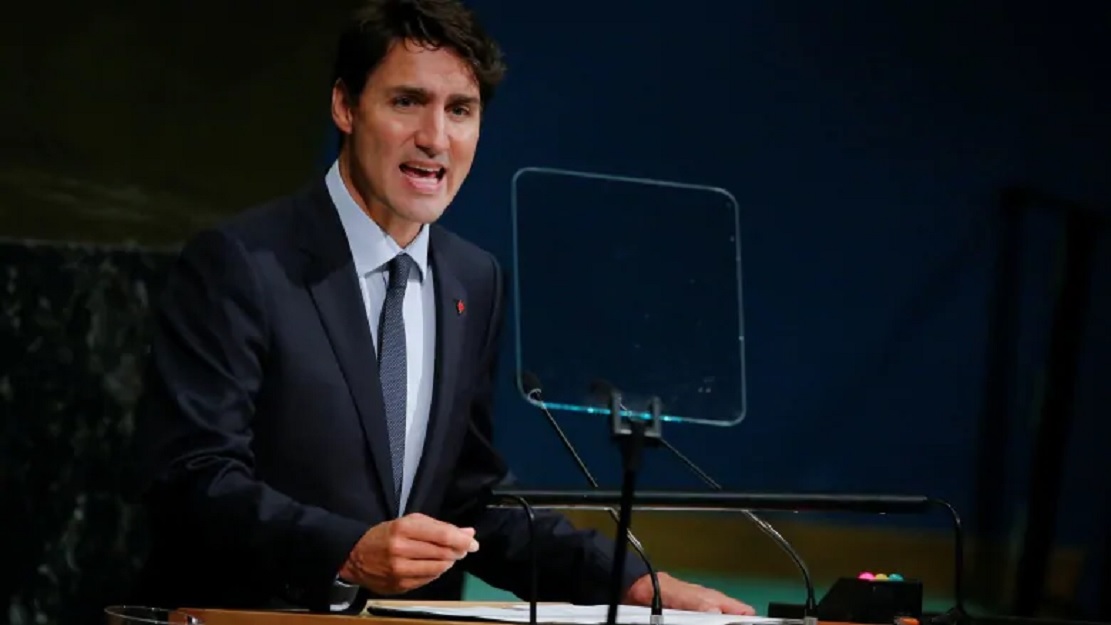 Prime Minister Justin Trudeau addresses the 72nd United Nations General Assembly at UN headquarters in New York September 21, 2017. After blaming Conservatives for losing a bid for the U.N. Security Council seat, Trudeau said he would bring back Canada to the world stage, but he also lost the seat and many think in spite of his claims Canada’s reputation has not been improved (Eduardo Munoz/Reuters)

During the 2015 and 2019 elections, Trudeau had said Canada’s place on the world stage had suffered under Conservative leader Stephen Harper, including a failed bid for a temporary seat on the U.N. Security Council. Harper did not try again for the place on the council. Trudeau claimed the loss was an international indictment of the Conservative approach to the world and embarrassed Canada. 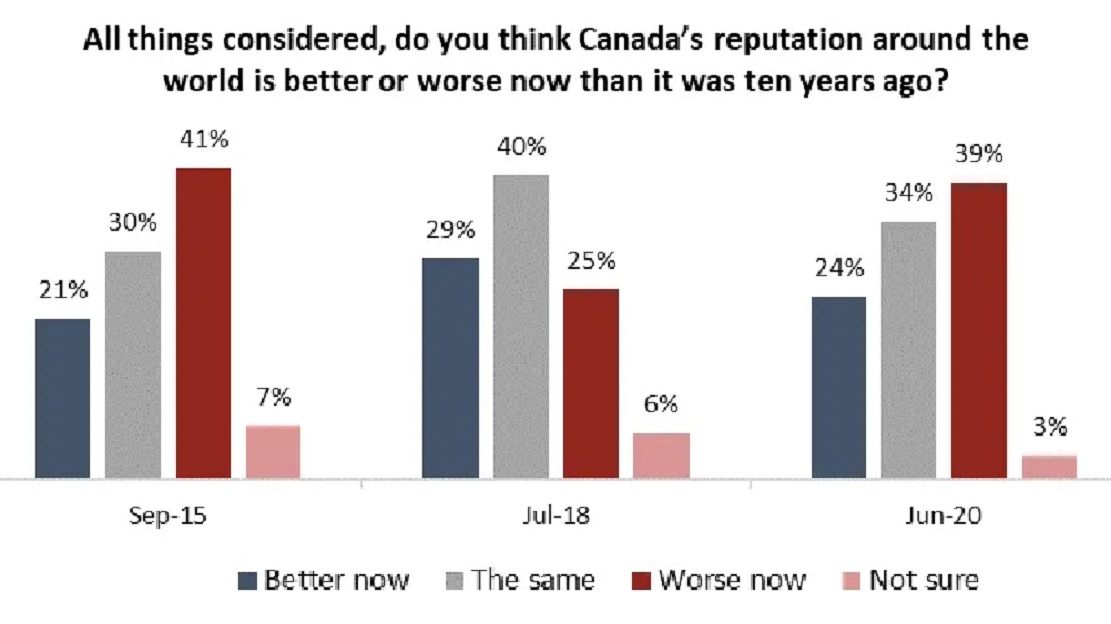 A decade later however and after five years of Trudeau’s leadership, Canada was again rejected for that seat. Several possible reasons are cited for the failure including Trudeau’s promotion of a feminist foreign policy while selling arms to Saudi Arabia, and contributing historically low numbers of Canadians to participate in peacekeeping.

Not only have Trudeau’s claims of elevating Canada’s position on the world stage not seen an imrovement, a high number of Canadians (41%) feel the country’s reputation has suffered.

Perhaps not surprisingly partisan voters have come out strongly along party lines. Among past Conservative voters, 71 per cent say Canada’s reputation has worsened under Trudeau, while only 11 per cent of recent Liberal voters would agree. 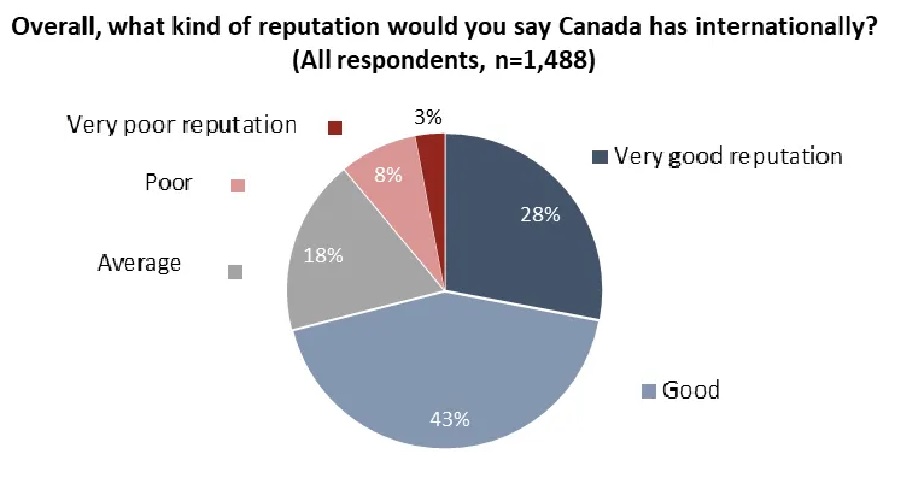 Still a clear majority feel Canada’s international reputation, while it may not have improved under Trudeau, remains good to very good (71%).