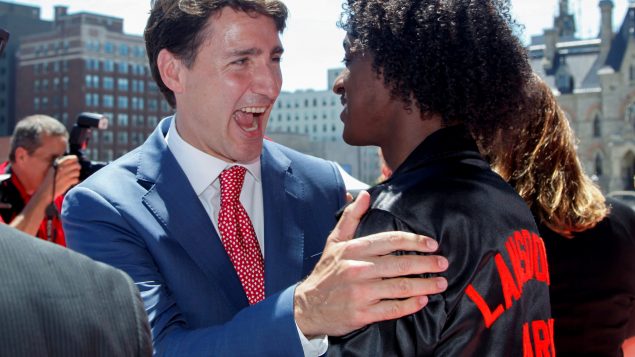 Remember hip hop Toronto singer K’Naan? His song Wavin’ Flag was used for the Coca-Cola commercial during the 2010 FIFA World Cup in South Africa. Yes, it’s been 10 years already, but the contagious energy certainly is still with you.

What is less known about Wavin’ Flag  is that the lyrics of K’Naan’s original song released in 2009 were not as joyful as the ‘celebration remix’ customized for the FIFA soccer event. They talked about war, famine, and were telling about Keinaan Abdi Warsame’s youth in Somalia’s capital Mogadishu.

“But we struggling, fighting to eat/ And we wondering, when we’ll be free/So we patiently wait for that faithful day/It’s not far away but for now we say.”Wavin' Flag lyrics

The chorus, which remained untouched and was sung worldwide before, during, and after the 2010 World Cup, talked about hope. You certainly know the lyrics if you are older than 15.

“When I get older I will be stronger/They’ll call me freedom just like a wavin’ flag.”Wavin' Flag chorus

Music certainly changed the life of K’Naan. First because it was a vector of expression when he came to Canada as a refugee at age 13, learning English by listening to rappers, then expressing himself by rapping in both English and Somali, and eventually rising to international stardom with Wavin’ Flag.

But it also allowed him to give back, for instance when he recorded a charitable version of his song for relief in Haiti after the January 2010 earthquake.

K’Naan once told the CBC that music and songwriting helped him live, but that life as a poor refugee in Canada was far from easy:

“When you are an immigrant, and a black immigrant, where your parents don’t come with a certain education, and you are running from war, and you have nothing, you are at the mercy of society.”Toronto rapper K'Naan

eMERGEnce, a unique program for immigrants and emerging artists in Toronto area

To help newcomers like K’Naan in his time, who are trying to integrate in the Canadian society and make a living as musicians, a unique program was recently founded by Small World Music, a Toronto-based, non-profit organization that was founded some 23 years ago to showcase music talents from underrepresented backgrounds.

“It is a unique project, different from initiatives that assume that participants already know the local music industry and the market. We introduce them to the main players and their specific roles: managers, agents, producers, presenters, bookers, funders, and we show them how to request grants, register for copyright for their compositions, and so on.”Umair Jaffar, Small World Music Executive Director

The idea is to help these artists so they start a career in music and earn a living in their new country, Jaffar says.

“Canada is one of the top countries in the world attracting major talents; still, they are driving Ubers or washing dishes. There is still a big gap that needs to be filled, and we want to offer them an alternative.”

Of course, all activities have been redirected online because of the COVID-19 pandemic: production, promotion, marketing are all going digital, and participants even learn how to prepare their online performances — the new reality they have to deal with. But the aim is still the same:

“It’s like an integration crash course. And a lot of it is based on my personal experience.”Umair Jaffar 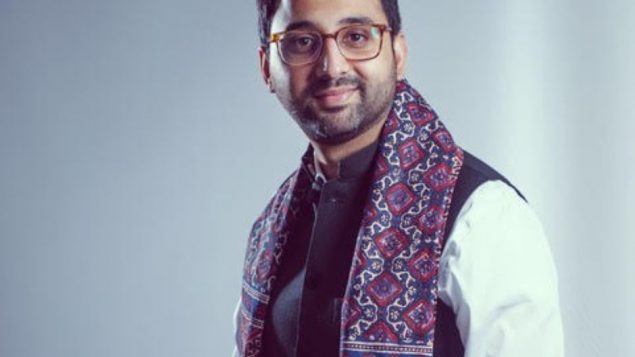 Born in Pakistan, Jaffar started his career as an accountant, but his hobby was always music production. He founded an institution dedicated to the promotion of traditional Pakistani performing arts and curated several events for foreign embassies, until he left his corporate job to focus on his passion, as a volunteer.

But under Taliban rule, artists were persecuted and killed, events were canceled, and Jaffar had to emigrate. As Canada was looking for accountants, he emigrated and settled in Toronto in 2013.

In no time, he reintegrated the cultural sector in the Canadian metropolis, working as a producer at Harbourfront Center and the Aga Khan Museum, two major cultural institutions that, incidentally, have partnerships with Small World Music.

“Small World Music is the only organization I knew about when I was in Pakistan, because they invited important Pakistani artists to perform, giving them the opportunity to go on with North American tours.”Umair Jaffar

Now that Jaffar is running the show at Small World Music, he wants to share what he learnt and give back, exactly like K’Naan and other artists who “made it” in Canada.

“We want to be the core pillar to help the integration of newcomers through music.”

Here are a few artists from the first cohort of the eMERGEnce program:

Pakistani actress and singer Meesha Shafi  was a brand ambassador for L’Oréal in Pakistan and played in Mira Nair‘s film The Reluctant Fundamentalist before moving to Canada in 2019. She made a great success back home with her Coke Studio Sessions, mixing traditional Pakistani music and Western instrumentation, and is now turning to more spiritual music forms.

Such crossovers are getting more frequent, Jaffar says, because there is already a long-established market for what the music industry has labelled “world music”. He thinks there are even more opportunities for newcomers thanks to the all-digital consumption of music, which opens up to new genres.

“Thanks to the digital revolution, there are less barriers for non-mainstream music forms.”Umair Jaffar

Jaffar recalls seeing a live concert of the British band Mumford & Sons performing with Senegalese singer Baaba Maal. A good example of such crossovers, he says.

Breaking the cycle of isolation is still a challenge for non-Canadian artists, who need to meet other peers.

“Small World’s various projects are especially designed to help foreign artists connect with people outside of their community and network between themselves.”Umair Jaffar

Several bands were formed between eMERGEnce participants who met during the program. Several of them have performed live on Facebook, including the Iranian classic musician Jafar Zabeh, who included an Indian tabla player in his trio.

Syrian female percussionist Nour Kaadan and her husband guitarist Tarek Ghriri were already a couple before taking part in the eMERGEnce program. Although she only arrived in Canada three years ago, Kaadan is already a well-established musician on Toronto’s music scene, playing in more than a dozen local bands.

A gifted percussion player, Kaadan started playing drums during the 2010 Syrian Revolution, and then switched to cajón, a percussion box used in Spanish flamenco music, but initially played by African slaves in Peru and Cuba. In Syria, she says women would more commonly play the violin.

“I wanted to express myself differently. I was breaking some barriers and setting an example.”Syrian percussionist Nour Kaadan 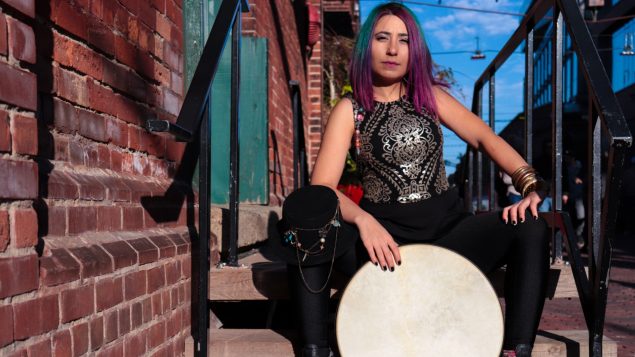 Syrian percussion player Nour Kaadan said she wanted to “break the barriers” when she took up drums, an instrument not traditionally played by women in her home country. (Mustafa Anas)

She left war-torn Syria with her husband Tarek and the couple made a living playing music and giving workshops to children in refugee camps.

“With music, we wanted to provide kids with a safe place, where there would be no judgment.”

As soon as they were able to move to Canada as refugees, Nour and Tarek adapted their program, called Music from Hope, for immigrant kids in the Greater Toronto Area (GTA).

“We have the same life experience and background. We feel connected to them and we only expect them to release their energy and their emotions and interact between themselves, even if they don’t have the same age or culture. They can play together as one body.”

Although they have already secured grants from the Toronto Arts Council and the Ontario Arts Council and have a booked agenda for 2021, the couple of musicians are participating in the eMERGEnce program to “find an agent and push their own music projects,” Kaadan says.