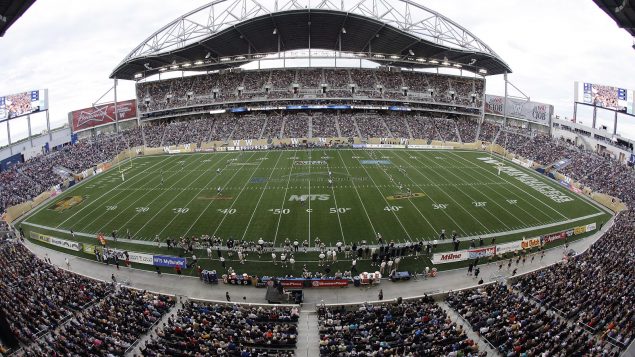 Investors Group Field is shown during opening kickoff for the CFL game between the Winnipeg Blue Bombers and Montreal Alouettes in Winnipeg on June 27, 2013. The Manitoba government is committing $2.5 million to help Winnipeg serve as the hub city for Canadian Football League games. Premier Brian Pallister says Winnipeg is in good shape because of its low COVID-19 numbers, and hosting the CFL would boost the hard-hit tourism industry. (The Canadian Press/John Woods)

Manitoba has made a $2.5 million bid to host the Canadian Football League’s shortened 2020 season in Winnipeg, according to an announcement from Manitoba Premier Brian Pallister on Monday.

The bid to host the CFL is part of a larger, $8 million commitment from the Manitoba government to attract and host large scale meetings, events, and conventions to restart the provincial economy while also balancing public health.

“Manitoba is leading in recovery with a safe plan to restart our economy, which is why we are ready to make another important investment that supports the restart of our economy and invite the CFL to safely play its shortened 2020 season in Winnipeg,” said Pallister.

If Winnipeg is chosen as hub city, the Manitoba government said that the $2.5 million would go towards food and accommodations, practice field rentals, group transportation, and event specific expenses in Manitoba.

According to a press release from the Manitoba government, the CFL’s hub city plan for Winnipeg has been reviewed by Dr. Brent Roussin, Manitoba’s chief provincial public health officer.

“The health and safety of all Manitobans and all participants is paramount,” Roussin said. “CFL teams and anyone associated with the hub city will be expected to follow all protocols as reviewed by Public Health, at all times.”

Should the CFL choose Winnipeg as a host city, it would host 60 games televised across the country and host the 108th Grey Cup.

However Manitoba is not the only province to make a bid to host the CFL season. The Saskatchewn government said that it will chip in $3 million if the bid from the Saskatchewan Roughriders to become a host city is successful.

“The Government of Saskatchewan is pleased to commit $3 million as part of the Saskatchewan Roughriders’ bid to be the hub city for the 2020 season, provided the one-hub city model is approved by health officials and the Canadian Football League and Regina is selected as the hub city,” Gene Makowsky, minister of parks, recreation and sport said in a statement to CBC News.

It is currently unclear when the CFL season would start and which city would host the season, however a statement from the league’s Commissioner Randy Ambrosie in May 2020, said that September is the earliest time the league could return to play.

Radio Canada International reached out to the CFL for further comments but they did not respond by press time.