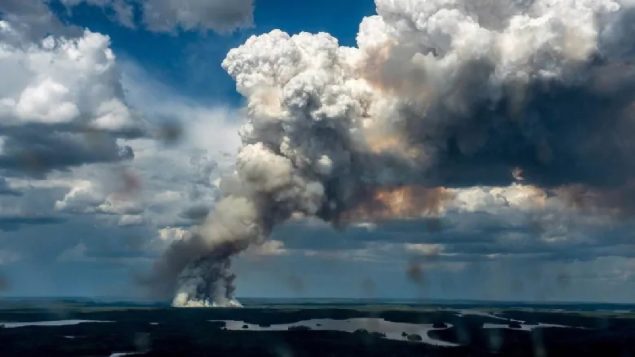 Wildfires like this one in 2019 in the La Ronge area of Saskatchewan are a greater risk as a result of increased warming in Canada due to climate change. The 12 month period globally ending in June 2020 was tied for the warmest on record, In June, a village in Siberia recorded the hottest Arctic temperature ever at 100.4F-38C (Saskatchewan Ministry of Environment/ Wildfire Branch/Canadian Press)

Global warming increase narrowed to between 2.6°C and 3.9°C,

For years, decades even, people and scientists have been arguing about global warming and where the Earth’s climate is heading.

Estimates based on a doubling of the atmospheric C02 level from pre-industrial levels  have varied from a 1.5 C warming increase to 4.5 C. In other words, from little real climate and environmental effects, to disaster.

This temperature range of potential warming increase has been little changed since first proposed in 1979 in spite of massive studies over the decades.

Now a team of  25 scientists from Australia, the U.K, the USA, Japan, France, the Netherlands, Switzerland, Sweden, and Germany have narrowed the range, also known as climate sensitivity.

The landmark study involved combining three lines of research: trends of contemporary global warming, lessons from studying ancient climate and records, and a better understanding of feedback effects and aspects that can slow or increase warming.

The international study showed all three independent lines of research led to the same conclusion of a narrowed scenario in the mid to upper level of expected warming.

The study, under the auspices of  the World Climate Research Programme, was published this week in the journal, Reviews of Geophysics, under the title, An assessment of Earth’s climate sensitivity using multiple lines of evidence ( abstract here)

The results now narrows the range with the worst case scenario gone or at least not likely (the high temperature estimate), but so is the best case (lowest increase in temperature) for the future.

The results of the various lines of research all point to a likely warming range of between 2.6°C and 3.9°C,

The study says that because the low end increase estimate is gone, “it now appears extremely unlikely that the climate sensitivity could be low enough to avoid substantial climate change (well in excess of 2°C warming) under a high‐emissions future scenario”  In other words, by the end of the century if we don’t reduce CO2 substantially, bad things will happen for sure.

Quoted in the Guardian  Reto Knutti, professor of climate physics at ETH Zurich’s Institute for Atmospheric and Climate Science said,”The good thing is that we’ve somewhat narrowed the range of future long-term warming, the bad thing is that we can no longer hope or claim that the problem will just magically go away.The main message is that unfortunately we can’t expect that luck will save us from climate change”.

Pre-industrial CO2 levels were around 280 parts per million, In May, atmospheric CO2 reached 417 ppm and is rising at some 2.5 ppm each year.

The international study which virtually eliminated the best case hope of a low level of warming, also however could entirely not rule out the high end of 4.5C, merely saying it was far less likely. The comprehensive research however does highlight the calls by the scientists that urgent reduction of CO2 is essential.