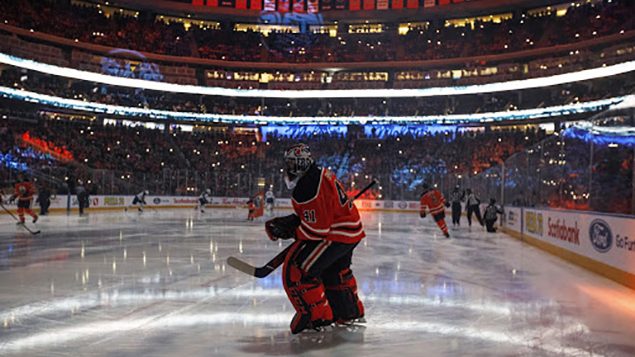 In this Feb. 20, 2020, file photo, Edmonton Oilers goalie Mike Smith warms up for the team's NHL hockey game against the Winnipeg Jets in Edmonton, Alberta. Deputy Commissioner Bill Daly told The Associated Press on Sunday, July 5, that the NHL and NHL Players’ Association have agreed on protocols to resume the season. Daly said the sides are still negotiating a collective bargaining agreement extension. A CBA extension is still crucial to the process. (Jason Franson/The Canadian Press via AP, File)

NHL and NHLPA reach tentative agreement for a return to play

The return to play plan will have teams start their training camps on July 13, travel to the chosen hub cities on July 26, and start playing games on Aug. 1.

The tentative agreement still has to be approved by the NHL’s board of governors as well as the NHLPA’s executive board.

“The respective review and approval processes will take place over the next few days and there will be no further comment until those processes are completed,” the NHL said in a statement.

The tentative agreement, which the NHL published on their website, states that during Phase 3 of the leagues return to play plan, players will report to their respective club facilities to participate in training activities, both on and off the ice.

Should any person develop symptoms, or test positive for COVID-19 during Phase 3, they must immediately notify the clubs medical staff, self isolate and must consult with the clubs medical team to determine the next steps.

In Phase 4, the 24 teams that qualified for the modified postseason will travel to the two NHL hub cities and be housed in secure zones which include hotels, restaurants, practice facilities, and arenas.

Teams can bring a total of 52 individuals which includes coaches, players, ownership and staff. Team rosters are limited to 31 players, including goalies. Each person in the secure zone be tested daily for COVID-19, be screened for symptoms and have their temperature checked.

During Phase 4, players are not allowed to leave the secure zone unless it is for extenuating circumstances, such as medical attention, birth of a child or a death in the family. Those who return after leaving from such circumstances will have to quarantine for four days, and be subject to daily testing.

If any player should leave the secure zone during Phase 4 for any other reason, they will have to self isolate for 14 days, be tested daily for COVID-19 and could even be dismissed from their responsibilities for Phase 4.

The return to play plan states that players are able to opt out of participating in Phase 3 and Phase 4 without being subject to any penalties, however they must tell their team this week.

The NHL or NHLPA also has the ability to postpone, cancel, delay or move games if either of them think that there is a risk to player health or safety.

How Play will Resume

Though the NHL has made no official announcement as of yet, reports said that Toronto and Edmonton would serve as the league’s hub cities for the eventual return to play later this summer.

As of Monday July 6, the NHL has had 396 players report to their practice and training facilities. The league said that they conducted over 2,900 tests, 1,400 of which happened during the last week, and that those tests resulted in 23 positive cases of COVID-19.