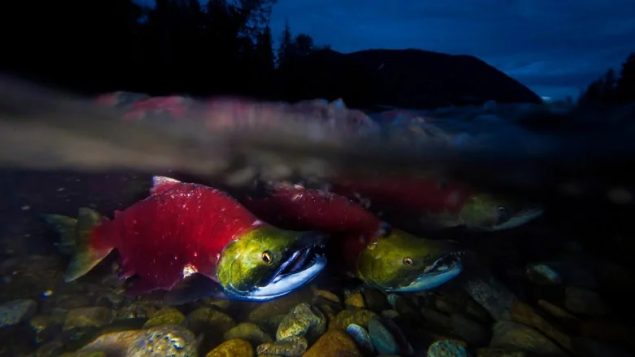 Spawning sockeye salmon from British Columbia's Adams River run are seen migrating to spawn on Oct. 13, 2014. Their counterparts in the Fraser River are facing major problems as they attempt to reach their spawning grounds. (THE CANADIAN PRESS/Jonathan Hayward)

A massive landslide in British Columbia’s rugged southern interior is making life extremely difficult for sockeye salmon for the second year in a row.

The salmon are attempting to swim the Fraser River to reach their spawning grounds, but the effects of high water created by the so-called Big Bar landslide near Lillooet, about 340 kilometres north of Vancouver, has been devastating.

It’s believed the landslide occurred in late October or early November 2018, but it wasn’t discovered until last June after fish had already begun arriving.

Gwil Roberts, the director of Fisheries and Oceans Canada’s response to the landslide, says it sent 85,000 cubic metres of rock crashing into the river.

It completely blocked migration routes for several salmon runs, prompting officials at multiple levels of government as well as local First Nations to organize a rescue mission that saw thousands of salmon lifted by helicopter across the rocks that blocked their migration route.

In June, Fisheries and Oceans Canada officials told a Commons committee that about 60,000 fish were helped over the slide last year, while 220,000 made it past on their own once water volume dropped but added that 99 per cent of early Stuart and 89 per cent of early chinook salmon were lost last year when they could not make it past the slide.

Now, the CBC’s Jon Hernandez reports that environmentalists and officials are extremely concerned about high water levels that are preventing an early sockeye salmon run from making its spawning grounds again this year.

A report from the Pacific Salmon Commission says a majority of the salmon will not make it to their spawning grounds mainly because of the on-going landslide at Big Bar.

Despite tens of thousands of fish passing through sites down river, Hernandez reports, none have been observed on the other side of the landslide.

“Natural passage has been limited at the slide, and no sockeye salmon have passed the slide at Big Bar to date,” reads a briefing from the Fraser River Panel. 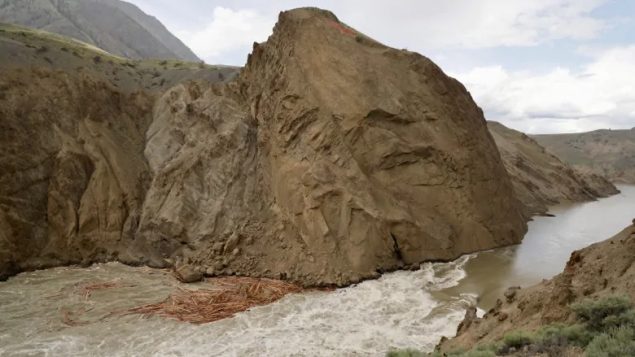 Roberts, the Fisheries and Oceans official, told Hernandez the volume of water in the Fraser River at Hope, which is downstream of the slide, was recently measured at about 62 per cent above average.

No debris from the landslide was removed from the river in 2019 but work is now ongoing.

However, but the cost of the federal contract for clearing out the landslide has tripled to $52.5 million as crews try to meet the goal of allowing salmon to migrate naturally.