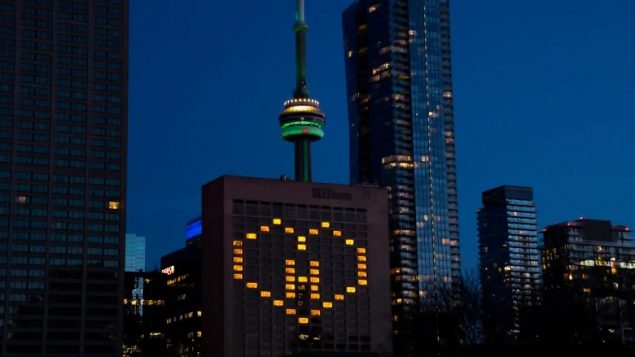 Lights in the rooms of the Hilton Hotel in Toronto are lit to honour front line health care workers on April 5. Things appear to be looking brighter for residents of Canada's biggest city. (THE CANADIAN PRESS/Frank Gunn/)

COVID-19 restrictions set to ease for millions in southern Ontario

Millions of people living in southern Ontario–the region known as the Greater Toronto Area–may be able to take a deep breath on Friday.

Or at the very least–catch it.

On a day, when health authorities announced the lowest number of day-over-day COVID-19 increases since late March, the Ontario government said that–as of Friday–Toronto and the neighbouring Peel Region, which includes Brampton, Caledon and Mississauga, will join virtually all of the rest of the province and move to Stage 3 of the COVID-19 recovery plan. 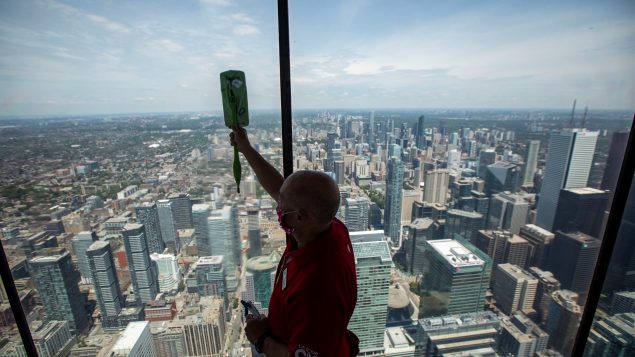 An employee cleans the glass of the LookOut level of the 553 metres high CN Tower, which reopened earlier this month. (REUTERS/Carlos Osorio)

In Stage 3, nearly all businesses and public spaces can reopen, with health measures in place, and people can gather in larger groups.

“While more restaurants, theatres and businesses can hang up their Open for Business sign, we’re asking everyone to follow public health advice and act responsibly,” Premier Doug Ford said in a press release. 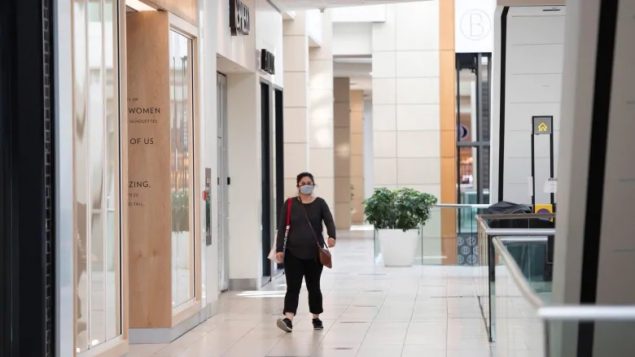 Shopping malls were allowed to reopen as part of Stage 2 of Ontario’s plan to lift COVID-19 restrictions. In Stage 3, nearly all businesses and public spaces can re-open with health measures in place and people can gather in larger groups. (THE CANADIAN PRESS/Justin Tang)

“We have made tremendous progress that allows us to return to something a little closer to our normal lives this summer, but we are not out of the woods yet.”

Twenty-four of Ontario’s 34 public health units were allowed to enter Stage 3 on July 17, with another seven joining them on July 24.

The lone outlier is Windsor-Essex, the site of major outbreaks on farms and in agribusinesses, which will remain in Stage 2 until its COVID-19 case growth falls.

Two cities in Stage 3, Ottawa and Sudbury, have had new cases of COVID-19 emerge in recent days, but Ford said Tuesday there are no plans to roll back the reopening in any areas. 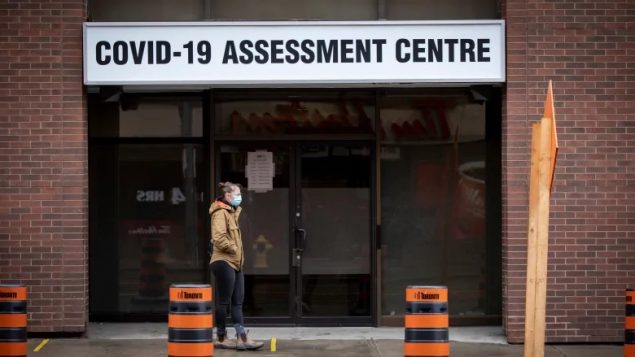 Ontario on Wednesday reported its the lowest day-over-day increase of COVID-19 in cases since late March. (Evan Mitsui/CBC)

As the province tries to move forward, COVID-19 cases appear to be moving backwards.

The province reported one new death related to COVID-19 on Wednesday.

There were also 174 cases newly marked as resolved.

“It seems like a long way from the scary days of the winter when we were having our meetings at the beginning of the pandemic and hearing numbers that were almost incomprehensible, in terms of case counts and also projections as to how many people could lose their lives or become ill,”  Toronto Mayor John Tory told a Wenesday news conference. 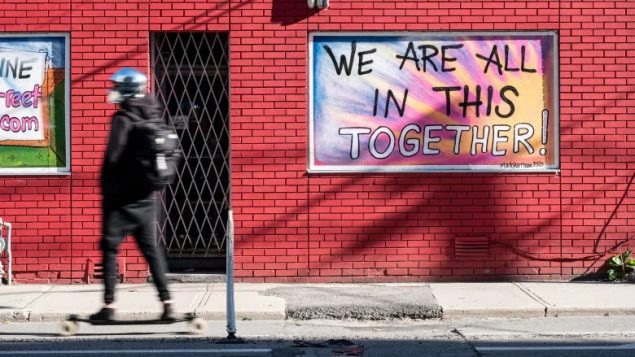 For most Toronto residents, it’s been a very tough haul. (Timothy Neesam/CBC)

The mayor has said he wants to enact enhanced safety measures during Stage 3.

Those include limiting indoor capacity and table sizes at bars and restaurants and requiring customers to remain seated at all times except when they are using the washroom or paying.

The province has it supports the additional measures for bars and restaurants.