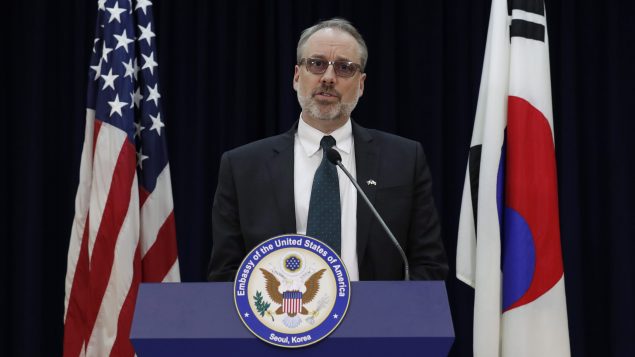 James DeHart, U.S. Department of State's a senior advisor for security negotiations and agreements bureau of political-military affairs, speaks after a meeting with South Korean counterpart on the Special Measures Agreement (SMA) at the public affairs section of the U.S. Embassy in Seoul, South Korea, Tuesday, Nov. 19, 2019. DeHart was named the new head of Arctic coordination at the U.S. State Department on July 29, 2020. (AP Photo/Lee Jin-man, Pool)

The appointment of James DeHart as the U.S. coordinator for the Arctic signals the region’s growing importance to Washington as an arena of geopolitical competition with Russia and China, say Canadian and American defence experts.

DeHart, a career diplomat with extensive experience in global defence and security issues, is stepping into a position that was left vacant for nearly three years after retired U.S. Coast Guard Admiral Robert Papp left office in early 2017.

Rob Huebert, a Canadian defence expert who teaches at the University of Calgary, said DeHart’s appointment reflects the fact that the Trump administration is becoming much more concerned about Arctic issues.

“I also find it interesting, of course, that the individual that they bring in has much more expertise dealing with great power politics,” Huebert told Radio Canada International.

Troy J. Bouffard, who teaches at the University of Alaska Fairbanks and is the assistant director of the Center for Arctic Security and Resilience (CASR), said DeHart’s postings in different positions and the variety of global experience make him “the right guy for the right job.”

“I think this is a pretty strong, clear message that increases the legitimacy of our interests, the U.S. interests in the Arctic,” Bouffard told Radio Canada International. “It definitely elevates the importance of the region diplomatically.”

The commission is supposed to be an apolitical body that coordinates Arctic policy within the U.S., particularly on the research side, Huebert said. But neither Newton nor Harrison is known for having “strong backgrounds” in Arctic policy, he added.

Newton teaches law and is an expert on terrorism, accountability, transnational justice, and conduct of hostilities issues, while Harrison comes from a business background, he said.

“These are interesting choices being made, because traditionally it was someone from the Arctic, Alaska, or someone who had a longstanding experience with the Arctic region,” Huebert said. “And so seeing Newton and Harrison appointed, I think shows a different direction of what the administration is in fact thinking.” 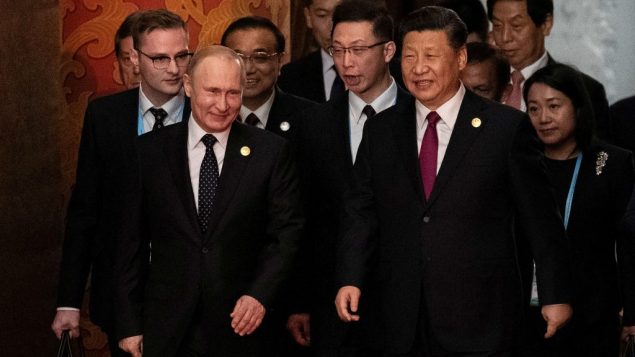 Russia’s President Vladimir Putin (left) and China’s President Xi Jinping (right) at the welcome banquet for leaders attending the Belt and Road Forum at the Great Hall of the People on April 26, 2019 in Beijing, China. Both countries are investing heavily in the Arctic. (Nicolas Asfouri/Pool/Getty Images)

Bouffard said DeHart assumes his new role as the U.S. plays catch-up to Russia and China in the Arctic.

The increased access to the Arctic region due to climate change has underlined the importance for the U.S. and its allies, including Canada, to improve their capabilities in the north, Bouffard said.

“From a defence perspective Russia has made it clear – and it’s probably less rhetoric than not – that they are watching and listening very closely, they do not appreciate U.S. and NATO interest and movements towards the Arctic,” Bouffard said.

Given his significant diplomatic experience in defence and security issues, DeHart is uniquely qualified to navigate these tensions with Russia, he added.

Keeping an eye on Greenland 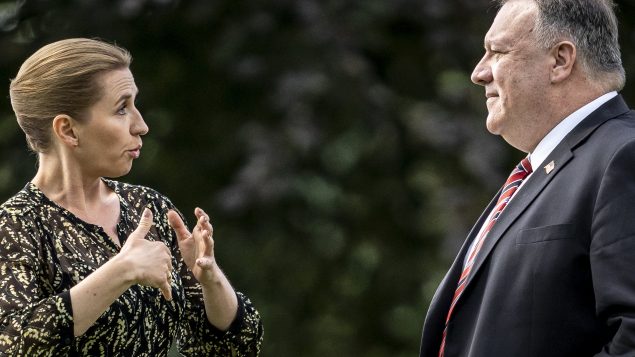 For Canadian policy makers, DeHart’s appointment continues to illustrate the growing importance of the Arctic region to the Americans, Huebert said.

“We have to increasingly pay attention to what the Americans are doing,” Huebert said. “The critical point is not to get the Americans focusing on us but for them to think of us as mainly good, cooperative partners in an increasingly important area.”

One of the other things that Canadian policy makers should be watching closely, Huebert said, is the Trump administration’s efforts to improve its relationship with Greenland, which could have implications for the North American Aerospace Defence Command (NORAD).

“We’re seeing clear efforts by the Americans to improve their relationship with Greenland, but not necessarily with Copenhagen at the same time,” Huebert said.  “I think the Americans have definitely gotten Greenland into their view as a strategically important location because of Thule [Air Base].”

Located on the north coast of Greenland, a Danish autonomous territory, Thule is the United States Air Force’s northernmost base.

“If I were in Danish politics, this would be something I’d be paying very close attention to,” Huebert said.

Canada has always thought of NORAD as something special for Canada-U.S. relations — but it’s possible the Americans want to bring Greenland into that relationship as well, he said.

“That, of course, may make sense on the strategic level but politically it challenges that special relationship between Canada and the U.S.,” Huebert said.