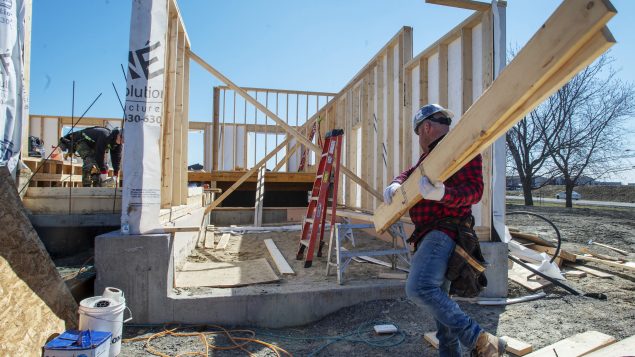 Charles Rochfort, left, and Jonathan Grenier work on a home in Deux-Montagnes, Quebec, Monday April 20, 2020. Construction rose 17.6% in May. The easing of COVID-19 construction restrictions in May, most notably in Ontario and Quebec, contributed to the largest monthly increase since the series started in January 1961. (Ryan Remiorz/THE CANADIAN PRESS)

Canada’s economy grew by 4.5% in May, set to grow more in June: report

Canada’s economy grew by a healthy 4.5 per cent in May and is set to grow by 5 per cent in June as the gradual lifting of pandemic-induced lockdowns takes the country further away from the economic abyss it was facing in March and April.

But despite the stronger than expected growth Canada’s economy was still 15 per cent below the level it was at in February, before COVID-19 hit, the national statistics agency reported Friday.

Statistics Canada said 17 of the 20 sectors of the economy it tracks grew.

The initial recovery was led by goods sector industries and retail trade, with construction output growing 17.6 per cent month over month, manufacturing output up 7.4 per cent and retail up 16.6 per cent.

Education and health care grew 6.7 and 3.3 per cent, respectively in May.

Accommodation and food services grew 24.2 per cent after falling almost 70 per cent in March and April, yet arts, entertainment, recreation declined another 2.9 per cent.

Pedro Antunes, chief economist at the Conference Board of Canada, said May’s real GDP data and other recent indicators suggest that Canada’s economy has emerged strongly from the pandemic shutdown.

“While the recovery will continue, we expect a bumpy ride in coming months,” Antunes said in a statement. “Operating with the ongoing risks associated with the novel coronavirus will be challenging for many businesses, and further localized shutdowns are likely.”

Exporters and manufacturers will also feel the effects of the recent surge in COVID-19 cases in the United States, he said.

Despite the two months of growth after two months of negative readings, Statistics Canada’s preliminary estimate is that economic output contracted by 12 per cent in the second quarter compared to the first three months of 2020.

CIBC senior economist Royce Mendes said that a 12-per-cent drop in the second quarter would be the largest decline ever by a long shot, even if such a decline was expected.

“The good news is that Canada’s more cautious reopening has kept virus cases under control north of the border, suggesting the economy is in a position to outperform that of the U.S. in the third quarter,” Mendes wrote in a note.

“If Canada is able to keep new COVID-19 cases low, the divergence in growth between the two countries could be stark.”