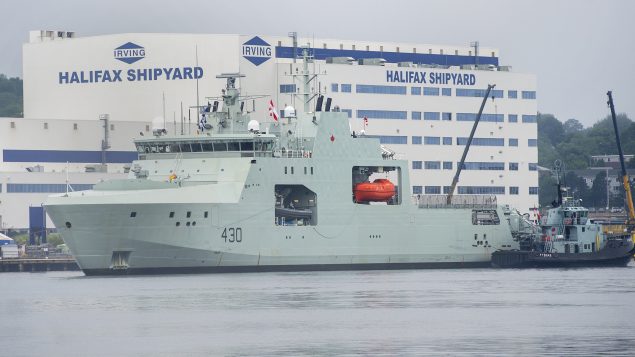 HMCS Harry deWolf heads from the Irving-owned Halifax Shipyard on its way to being delivered to the Royal Canadian Navy dockyard in Halifax on Wednesday, July 31, 2020. The vessel is the first of the new offshore Arctic patrol ships and will conduct surveillance operations, assist in anti-smuggling and anti-piracy operations as well as humanitarian assistance and disaster relief. (Andrew Vaughan/THE CANADIAN PRESS)

The Royal Canadian Navy officially received on Friday its new Arctic and Offshore Patrol Ship (AOPS), HMCS Harry DeWolf, first of a class of six ice-capable warships the military is expected to get to beef up its ability to protect Canada’s northern coastal waters.

Vice-Admiral Art McDonald, Commander of the Royal Canadian Navy, said the delivery of HMCS Harry DeWolf, named in honour of Vice-Admiral Harry DeWolf, a Canadian wartime naval hero, marks the beginning of an “exciting time for the RCN.”

In addition to operating in up to 120 cm of first-year sea ice, these new ice-capable warships will be able to accommodate a submarine-hunting Cyclone helicopter as well as small vehicles, deployable boats, and cargo containers.

Not an armed icebreaker 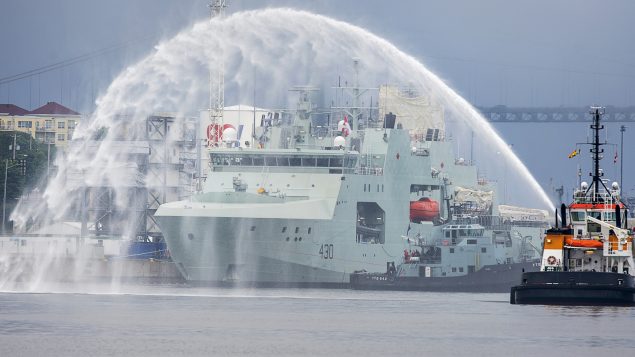 HMCS Harry deWolf heads from the Irving-owned Halifax Shipyard on its way to being delivered to the Royal Canadian Navy dockyard in Halifax on Wednesday, July 31, 2020. (Andrew Vaughan/THE CANADIAN PRESS)

In terms of their offensive and ice capabilities, AOPS are a far cry from an armed icebreaker, but will at the same time have more maneuverability and flexibility, experts say.

“These ships will be at the core of an enhanced Canadian Arctic presence, effectively complementing the capabilities of our other current and future warships through critical reconnaissance and surveillance operations,” McDonald said in a statement.

The Harry DeWolf-class will also be capable of a myriad of different mission sets including humanitarian assistance and disaster relief, McDonald added.

#ICYMI: our first new #AOPS has arrived at its home port at the CFB Halifax Dockyard for the first time. #HMCSHarryDeWolf #RCNavy pic.twitter.com/3e0tuEOcqP

Then-prime minister Stephen Harper first announced plans to build up to eight armed Arctic patrol vessels in July 2007 and Irving was selected in October 2011 to produce them before building replacements for the navy’s frigates and destroyers.

But the following years saw several cost overruns and delays in the program, which ballooned from $3.1 billion initially budgeted for the project to $4.1 billion for six warships. 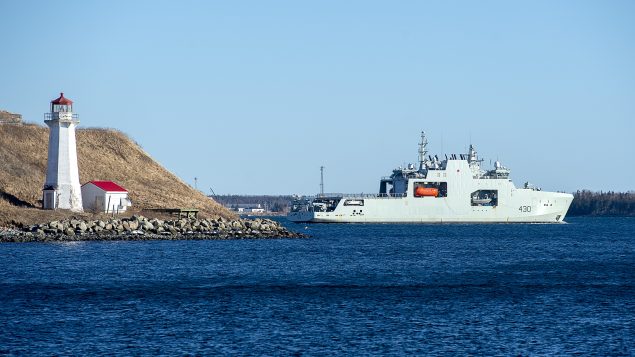 The Royal Canadian Navy is entering a new era today as it officially welcomes the long-overdue HMCS Harry deWolf into its fleet. The future HMCS Harry DeWolf, the navy’s first Arctic and offshore patrol ship, built at the Irving-owned Halifax Shipyard, heads from the harbour in Halifax for sea trials on Friday, Jan. 31, 2020. (Andrew Vaughan/THE CANADIAN PRESS)

HMCS Harry DeWolf will remain docked at Jetty NJ at the Canadian Forces Base (CFB) Halifax Dockyard while the navy conducts its post-acceptance trials and training, including operations near Newfoundland and Labrador, officials said.

Once this post-acceptance work is complete, the ship will undergo a formal commissioning ceremony in the summer of 2021, which will mark that it has officially entered into active naval service, followed by an Arctic deployment, they said.

Construction for the following three ships – HMCS Margaret Brooke, HMCS Max Bernays and HMCS William Hall – continues at Irving’s Halifax Shipyard, with construction of the fifth and sixth ships expected to begin in 2021 and 2022, respectively.

The Canadian Coast Guard will also get two civilian versions of AOPS, at about $400 million a piece.

The federal government is also working to complete the Nanisivik Naval Facility, on northern Baffin Island, in the Arctic territory of Nunavut. The former lead-zinc mine site, converted into a refueling facility for the Canadian navy, will support operations of the new AOPS and other government maritime vessels, officials said.

Initially slated for completion in 2015, this new facility is now expected to be completed in 2022.