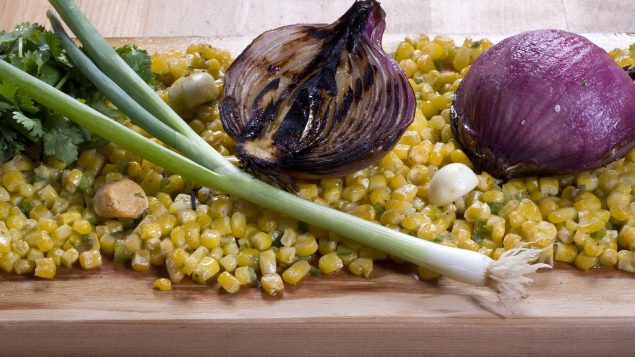 Cedar-grilled corn and red onion salsa is seen in this April 6, 2010 photo. Health authorities are warning consumers in Central and Western to avoid eating red onions imported from the U.S. that have been linked to a Salmonella outbreak. (The Canadian Press/AP/Larry Crowe)

Investigators from the Public Health Agency of Canada (PHAC) determined on Thursday that red onions imported from the United States are the likely source of an outbreak of salmonella infections across the country.

On July 24, the PHAC said that they were investigating an outbreak of 59 salmonella infections in five provinces across the country. Since then, there have been 55 additional illnesses reported in Canada.

As of July 30 there are 114 confirmed salmonella cases. Information is available for 102 cases, and out of those cases, 16 people have been hospitalized and no deaths have been reported.

They also advised retailers and restaurants in those locations not to use, sell, or serve red onions imported from the U.S.. Red onions grown in Canada are not affected.

Health officials also said to wash and sanitize drawers or shelves in fridges and cupboards where the red onions were stored.

The Canadian Food Inspection Agency (CFIA) issued a recall on Friday for red onions imported from the U.S. by Sysco due to possible salmonella contamination. The CFIA added that they will continue their investigation into other possible importers and advised that additional recalls may occur.

Salmonella bacteria are found naturally in the intestines of small animals, birds, and reptiles. The bacteria are most transmitted to people when they contaminate food, which usually comes from animals such as poultry, beef, milk, eggs and can include fruits, vegetables and herbs.