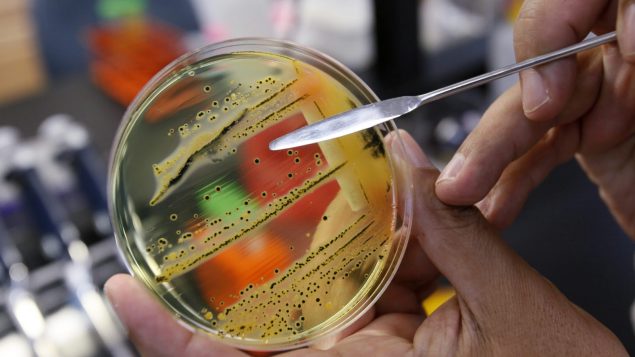 Dr. Mansour Samadpour points out a growth of salmonella in a petri dish at IEH Laboratories Monday, May 17, 2010, in Lake Forest Park, Wash. (The Canadian Press/AP-Elaine Thompson)

The Public Health Agency of Canada (PHAC) said that they are investigating an outbreak of 59 salmonella infections in five provinces across the country.

According to a public health notice released on Friday, the Public Health Agency of Canada said as of July 24, there are 23 infections in British Columbia, 31 in Alberta, three in Manitoba, one in Ontario, and one in Prince Edward Island.

People were infected and became sick between mid-June and mid-July 2020. The PHAC said that information is only available for 28 infections, and out of those infections, six people have been hospitalized and no deaths have been reported.

The source of the outbreak has not been identified, and is ongoing as recent illnesses and infections continue to be reported to the PHAC.

The United States Centers for Disease Control and Prevention is also investigating a Salmonella outbreak that is similar to the outbreak in Canada.

Salmonella bacteria are found naturally in the intestines of animals, birds and reptiles, and the bacteria are most often transmitted to people when they contaminate food. Contaminated food usually comes from animal sources, such as poultry, beef, milk, eggs, and can include fruits, vegetables and herbs.

Symptoms of a salmonella infection usually start six to 72 hours after exposure, and include fever, chills, diarrhea, abdominal cramps, headache, nausea and vomiting.

The PHAC said that it will provide updates as the investigation moves forward.