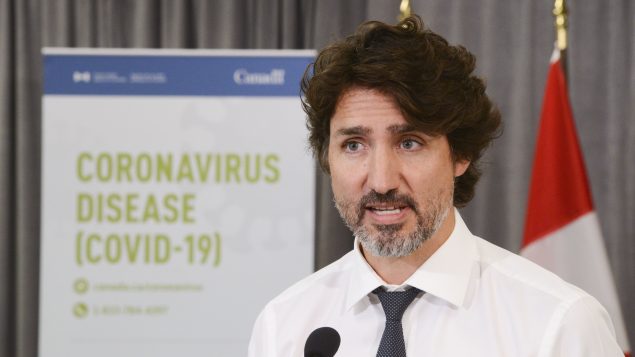 Prime Minister Justin Trudeau holds a press conference as he visits the Public Health Agency of Canada during the COVID-19 pandemic in Ottawa on Friday, July 31, 2020. (Sean Kilpatrick/THE CANADIAN PRESS)

Trudeau announces plans to transition from emergency benefits to EI

Trudeau promised that “no one will be left behind” as the $80-billion pandemic relief program wraps up this fall.

Even those who normally would not qualify for EI – contract and gig economy workers – will be offered a “transitional, parallel benefit that is similar to Employment Insurance,” Trudeau said.

“It will include access to training, and being able to work more hours and earn more money while receiving the benefit,” Trudeau said.

“That’s only appropriate as our economy reopens and brings back more jobs.”

The federal government will also offer a sickness and caregivers benefit for Canadians who are not covered at work if they get COVID-19, or those who have to take time off to care for their children and parents, Trudeau added.

Details of the program will be unveiled sometime in August, Trudeau said.

“We intend to cover every Canadian who is looking for work with a better, 21st-century EI system,” he said.

The most recent figures on the CERB show that as of July 26, the government had paid out $62.75 billion in benefits to 8.46 million unique applicants since its launch.

Speaking at a news conference later on Friday, Employment Minister Carla Qualtrough said the reason federal officials developed the CERB was because the EI system couldn’t handle the wave of new applicants early on in the pandemic as millions were laid off.

However, as the economy begins to recover after the shutdown in March and April, the CERB has “served its purpose, and the reason it was created is no longer the main focus of our efforts as a government.”

“We are very confident now the system is ready,” Qualtrough told reporters.