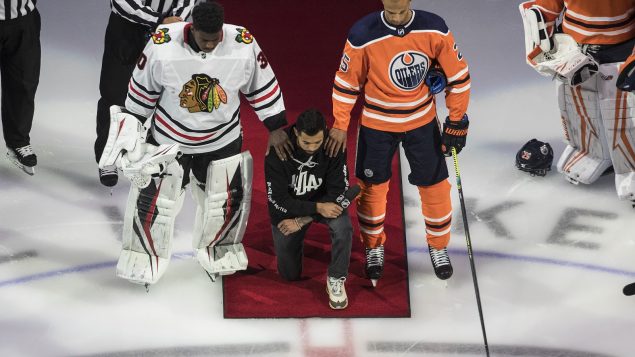 Minnesota Wild’s Matt Dumba became the first National Hockey League (NHL) player to kneel for the American national anthem on Saturday, during the first day of the league’s restart.

Dumba, who was born in Regina and half-Filipino, is one of the founding members of the Hockey Diversity Alliance, a group founded on the principles of eradicating racism and intolerance in hockey.

Before the game between the Chicago Blackhawks, and the Edmonton Oilers on Saturday, Dumba gave a speech on systematic racism, and the importance of fighting against injustice.

“Racism is a man made creation, and all it does is deteriorate from our collective prosperity,” Dumba said during his speech on Saturday afternoon. “Racism is everywhere and we need to fight against it.”

“I hope this inspires a new generation of hockey players, and hockey fans because black lives matter. Breonna Taylor’s life matters. Hockey is a great game, but it could be a whole lot greater, and it starts with all of us,” Dumba added.

Dumba then kneeled when the U.S.’s national anthem, the Star Spangled Banner, played. Blackhawks goalie Malcolm Subban and Oilers defender Darnell Nurse had their hands on Dumba’s shoulders while he kneeled.

Dumba did not kneel for the Canadian national anthem, O Canada, however in a video conference on Sunday, Dumba said he regretted the decision.

“There needs to be a lot of light that has to be shed on what is happening in Canada and the oppression First Nations people have felt here for hundreds of years,” Dumba said in a video conference on Sunday. “I have First Nations and Aboriginal families that have lived it and I was disappointed looking back on it.”

On Sunday, Dumba raised his fist for both the American and Canadian national anthem before the Minnesota Wild’s first game against the Vancouver Canucks on Sunday.