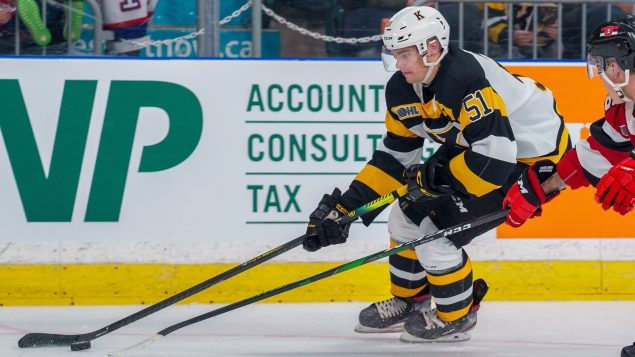 Kingston Frontenacs' Shane Wright moves with the puck during OHL action against the Ottawa 67's in Kingston, Ont. on Friday Sept. 27, 2019. The Ontario Hockey League (OHL) is planning to start its 2020-2021 season on Dec. 1. (The Canadian Press/Reuben Polansky-Shapiro)

The Ontario Hockey League (OHL) is planning to start its 2020-2021 season on Dec. 1 to ensure that its players, staff, fans and community are able to play and attend games safely.

“We are looking forward to getting back to playing hockey, but are committed to ensuring that we do so in a manner that is safe and healthy for our players, officials, families, billets, teams, staff, fans and the community,” said David Branch, the commissioner of the OHL. “Players will remain at home until the season resumes and teams will work closely with them on both their academic studies and overseeing their on and off-ice development.”

A press release from the OHL on Wednesday said that the league is going to continue working with government and health agencies to finalize issues such as safe attendance at arenas, and cross border travel for teams and players.

Out of the 20 teams in the OHL, three of them are from the United States, therefore cross border travel can be an issue if travel between the Canada-U.S. border remains prohibited when the season starts.

The OHL plans on having a 64 game schedule that will end in April and a 16 team playoff format.

So far, the OHL is the first Canadian major junior league to delay the start of the season. The Quebec Major Junior Hockey League said that they’re still planning on dropping the puck on Oct. 1, according to an email from its director of communications, and the Western Hockey League has yet to make any official announcements.

Radio Canada International reached out to the Western Hockey League for comment but they did not respond by press time.