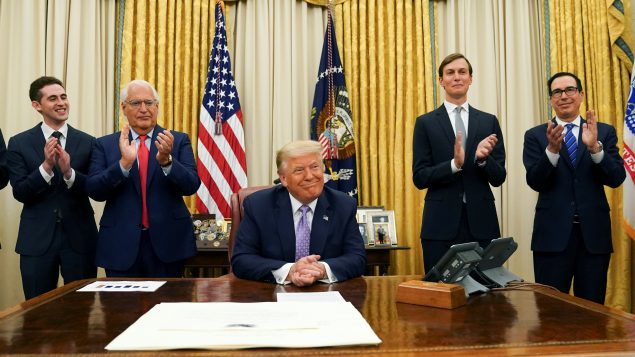 U.S. President Donald Trump receives applause after announcing that Israel and the United Arab Emirates have reached a peace deal that will lead to full normalization of diplomatic relations between the two Middle Eastern nations in an agreement that Trump helped broker, at White House in Washington, U.S., Aug. 13, 2020. (Kevin Lamarque/REUTERS)

Canada welcomes normalization of relations between Israel and U.A.E.

“We see this as a historic and positive step toward peace and security in the region,” Champagne said in a statement on Thursday evening.

Under the accord, which U.S. President Donald Trump helped broker, Israel agreed to suspend its planned annexation of areas of the occupied West Bank.

“We are also pleased that the Israeli government has announced its decision to suspend the annexation of parts of the West Bank,” Champagne said.

“As a friend and ally of Israel and a friend to the Palestinian people, Canada remains strongly committed to a two-state solution, including the creation of a Palestinian state living side-by-side in peace and security with Israel, and a comprehensive, just and lasting peace.”

But the Palestinians say the deal between Israel and the U.A.E. puts a just resolution of the Middle East conflict even farther out of reach.

The UAE presented its decision to upgrade longstanding ties to Israel as a way of encouraging peace efforts by taking Israel’s planned annexation of parts of the occupied West Bank off the table, something Israeli Prime Minister Benjamin Netanyahu swiftly rebuffed by insisting the pause was “temporary.” 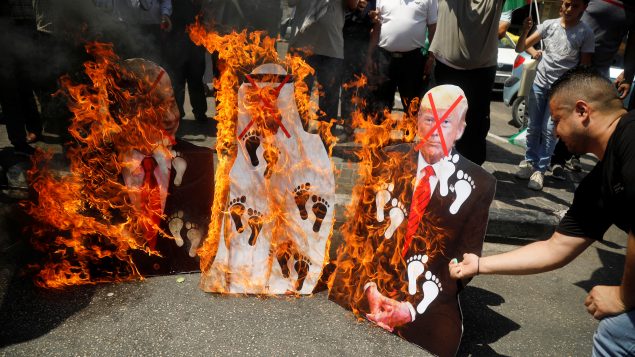 From the Palestinian perspective, the U.A.E. not only failed to stop annexation, which would dash any remaining hopes of establishing a viable, independent state. It also undermined an Arab consensus that recognition of Israel only come in return for concessions in peace talks — a rare source of leverage for the Palestinians.

“I never expected this poison dagger to come from an Arab country,” Saeb Erekat, a senior Palestinian official and veteran negotiator said Friday. “You are rewarding aggression. … You have destroyed, with this move, any possibility of peace between Palestinians and Israelis.”

President Donald Trump has presented the U.S.-brokered agreement as a major diplomatic achievement and said he expects more Arab and Muslim countries to follow suit. Israel has quietly cultivated ties with the U.A.E. and other Gulf countries for several years as they have confronted a shared enemy in Iran.

Thomas Juneau, a Middle East expert at the University of Ottawa, said while the Israel-U.A.E. deal is important, it doesn’t qualify as a peace deal nor a revolution in regional politics.

“It mostly consolidates existing trends – especially growing relations between Israel and Gulf monarchies, and the steady marginalization of Palestinians,” Juneau wrote on Twitter.

It’s not nitpicking. The Israel-UAE deal is important, but it is neither a peace deal nor a revolution in regional politics. It mostly consolidates existing trends – especially growing relations between Israel and Gulf monarchies, and the steady marginalization of Palestinians. https://t.co/EtpZAAYplm

Juneau also said it’s important not to exaggerate the significance of the Iran factor in driving the normalization of ties between the two countries.

“Yes, both Israel and the U.A.E. agree on the need to counter Iran, but it has been a secondary factor here,” Juneau wrote.

In Israel, the agreement has renewed long-standing hopes for normal relations with its Arab neighbors. Netanyahu has long insisted, contrary to generations of failed peace negotiators, that Israel can enjoy such ties without resolving its conflict with the Palestinians. For now, he seems to have been proven right.

Israel had signed peace agreements with Egypt in 1979 and Jordan in 1994. But the U.A.E., along with most other Arab nations, did not recognize Israel and had no formal diplomatic or economic relations with it until now. The U.A.E. becomes the first Gulf Arab country to reach such a deal with the Jewish state.