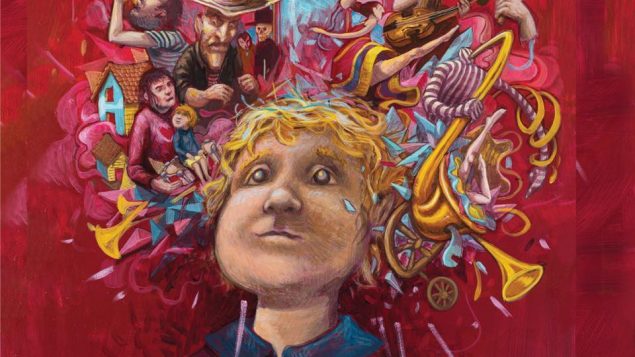 His given name is Manuk. Manuk Aukán. A name that was inspired by Chile’s Mapuche Indigenous tribe, a volcanic island in Indonesia, and an Armenian name meaning “child”. A camera follows him everywhere: on his mother’s back in chilly Montreal streets, in dance rehearsals, on the stage of a historic theatre, and during a bus trip across Colombia.

Manuk is the son of Carmen Ruiz and Sebastian Mejia, two Colombian artists from Cali who met in Montreal some fifteen years ago. The camera is held by the Award-winning Colombian film director Óscar Ruiz Navia, as he documents the life adventures of Manuk and his parents’ extraordinary music band the Gypsy Kumbia Orchestra during their exciting musical journey.

The documentary, called “Fait Vivir” (a mix of French and Spanish meaning “Makes You Alive”) was released digitally on Friday, August 14. It follows the month-long Colombian tour of the flamboyant collective from the mountains of Cali, country of the salsa, to the Caribbean city of Barranquilla, home of the cumbia.

Manuk was only a toddler when the film was shot. But as he grew up and the film was being edited, he became the narrator of this Bohemian voyage, from one stage to another, one village parade to the next, always singing and dancing like nomadic gypsies. In a sequence of the film, the little boy is seen hanging on to his Mom’s rolling suitcase as they get off the bus coach, with his comment in Spanish, saying : “I realized that the road was my home, too.”

The film is a perfect opportunity to retrace the history of this very peculiar band, which started with the union of the dancer Carmen Ruiz and the singer Sebastian Mejia. Partners in music and dance, dreams and travels, they founded the “Gypsy Kumbia” (or GKO) in 2012 – the same year Manuk was born.

The unique style of the collective is based on a crossover between the Afro-Colombian syncopated rhythms of the “cumbia” and the exuberant nostalgia in the music of Eastern European gypsies from the Balkans – hence the name: Gypsy Kumbia Orchestra.

With some 18 members, including a whole brass section, drums and percussion, violins, accordion and dancers, the GKO is a reflection of the Bohemian, post-Woodstock vibe of Montreal, where most musicians are based.

“Montreal is such a multicultural city that it allows for many kinds of artistic fusion,” says Sebastian. Indeed, the band includes artists from Canada, Colombia, France, Mexico, and more, considering that the parents of some of the Quebec natives have immigrated from India and Germany.

“Despertacles” to awaken people and bring them together

Carmen calls their live shows “despertacles”, a French-Spanish game of words translating into “shows that awaken.”

“The kind of work we do could be considered marginal or underground in a North American context. We first started by giving educational workshops where people would learn to meet each other and connect through dance and music, and keep their spirit alive and joyful.” Carmen Ruiz, co-founder of Gypsy Kumbia Orchestra

The opening sequence of “Fait Vivir” shows one of these sessions, with Manuk still as a baby laying down on the floor at the center of the dancing circle, his eyes wide open on the swirling amateur dancers. 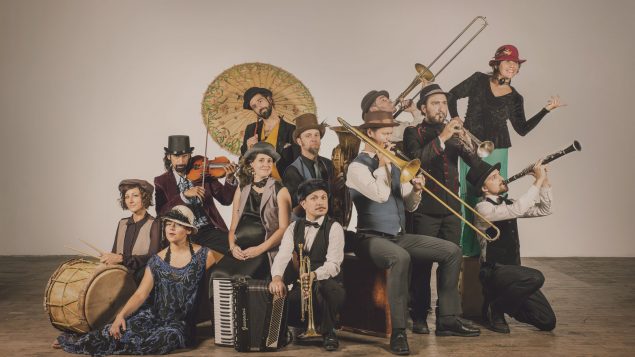 Films about circus and Gypsy culture

Although Carmen and Sebastian bring the initial ideas and the general framework for each new project, the creative process of the music composition, arrangements, staging, and choreographies is a collective one. The various influences come not only from different musical legacies, but also from different art forms: folkloric, salsa and contemporary dance, theatre, circus, but also storytelling, literature, and cinema.

Much like the live shows of Gypsy Kumbia Orchestra, the documentary Fait Vivir recalls the burlesque universes of the European filmmakers Federico Fellini and Emir Kusturica, whose respective films Clowns and Black Cat, White Cat have greatly impacted Carmen and Sebastian.

Latcho Drom, a music documentary about the Gypsy people filmed between India and Spain by French director Tony Gatlif, also was a major eye-opener on the great similarities with the Colombian people and the Rom – the Gypsies from Eastern Europe – , who suffered persecutions and massacres, but keep on smiling and dancing. Their resilience is a lesson, Sebastian says.

“I have a great admiration for the Rom people”, he says. “When we talk about the Holocaust, we tend to forget that they they also suffered a genocide during Word War II. This reminds me the way the Colombian people have suffered,” he says, referring to the five decades of armed conflict that have devastated his home country. 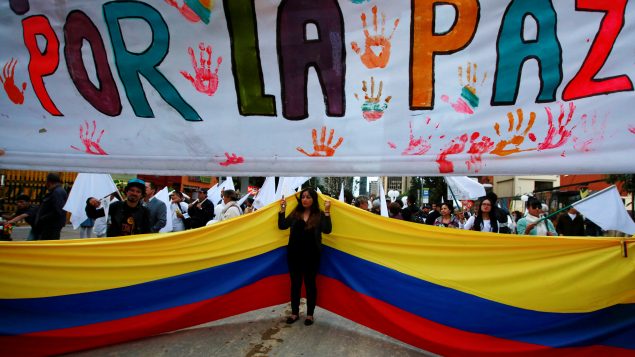 Supporters rallying for the nation’s new peace agreement with FARC stand under a banner reading “for peace” during a march in Bogota, Colombia, November 15, 2016. (John Vizcaino/Reuters)

Reconnecting with deep roots through music

Sebastian and Carmen both say they reconnected with their Colombian roots while in exile in Canada, mentioning a “strong urge to search for (their) identity”. Their 2014 Colombian tour, which started from their hometown Cali, was a unique opportunity to share with their extended family of musicians an apprenticeship with masters of traditional music, with deep African and Indigenous roots.

The film shows how Zillien, a band member from the Reunion island, a French department in the Indian Ocean, exchanges with “Toño” García, member of the hugely famous band Gaiteros de San Jacinto. The old player of “gaita”, a long, straight flute originating from the Indigenous tradition, hands to his young colleague the Grammy Latino Award he won in 2007.

Other milestones of the tour include a music jam on a rooftop in Cali with the clarinet player of La Mambanegra – an explosive salsa band that  was supposed to play in Quebec City’s Summer Festival this summer – and a drumming session in Palenque, a village in the Caribbean region that was founded by a former African king who escaped and formed an army of escaped slaves.

A universal tale of resistance

Folkloric dances, nomadic Gypsies and the transformative power of music are fundamental themes of the beautifully staged show performed by GKO for the camera of Óscar Ruiz Navia. Focused  on the conflict between the two imaginary clans of Makondo and Girovago people, the show is an adaptation of One Hundred Years of Solitude, the seminal book by Gabriel García Márquez. The Colombian author was awarded the Literature Nobel Prize in 1982 “for his novels and short stories, in which the fantastic and the realistic are combined in a richly composed world of imagination, reflecting a continent’s life and conflicts.”

The Makondos live under a repressive regime that prohibits any dance, music or colour, and their life is changed by the arrival of the Girovagos – which means “wanderers” in Italian.

“The allusion to repression and corruption are clear references to the Colombian political situation, but it could also be our fears and paranoia. Our message has a universal reach.”Carmen Ruiz

The Girovagos bring them joy through music and dance, and offer them a mirror – much like Melquiades, the Gypsy character of García Márquez’ masterpiece, who brings new inventions to the little village of Macondo. 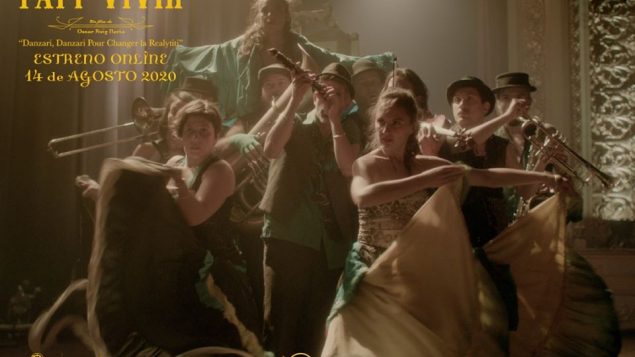 Like Melquiades as well, the MC of the show speaks an imaginary language made up of Spanish, French and Italian, and repeats the motto of the Girovagos: “Danzari, danzari, pour changer la realitytiti.”

“Music has this power to change our lives. This Colombian tour has created a stronger cohesion within the band and has made us more creative. I also know that after the screening of Fait Vivir in Biarritz Latin American Festival last fall, one of the spectators decided that he was now ready to have children with his partner.”Carmen Ruiz