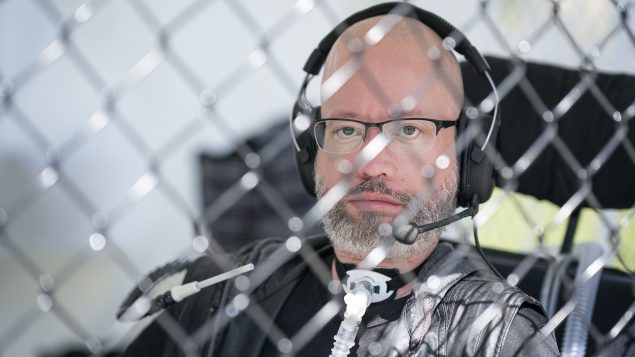 Jonathan Marchand on Monday removed the makeshift cage he set up in front of Quebec’s legislature last week–having won what appears to be a partial victory in his unorthodox campaign to bring attention to the plight of disabled people who must to live in long-term care homes for the elderly.

Marchand, a computer engineer whose courage and determination have resounded throughout the province since last Wednesday when he set up the cage, is 43 and has muscular dystrophy.

He breathes with the help of a ventilator, and he is one of 3,000 Quebecers under 65 old living in long-term care homes for the elderly, known as CHSLDs, because they are the only places they can get the 24-hour care they need to monitor the ventilators they need to breathe.

Watch: Jonathan Marchand explains why he set up his makeshift cage last week.

Marchand has likened CHSLDs to prisons for some disabled persons and says people with disabilities who are not seniors should be given the choice of how they want to live, instead of being forced into a facility.

“For us, it’s not just about being kept alive. We want the tools to be included in society,” Marchand said last week.

“For that, personal assistance is essential, as it exists elsewhere in Canada and around the world”.

After going through what he thought were the proper channels to get the government to take action, Marchand set up his cage, demanded a meeting with Premier François Legault, and vowed to stay until he got one.

He never got the meeting, but on Monday the government sent Marchand a letter, promising to set up a working group to study his idea of creating a personal assistance program so people with disabilities can live at home and manage their own support services instead of having to live in an institution.

Members of the working group will include representatives from the office of Seniors’ and Caregivers’ Minister Marguerite Blais, who met with Marchand last week, as well as home care experts. 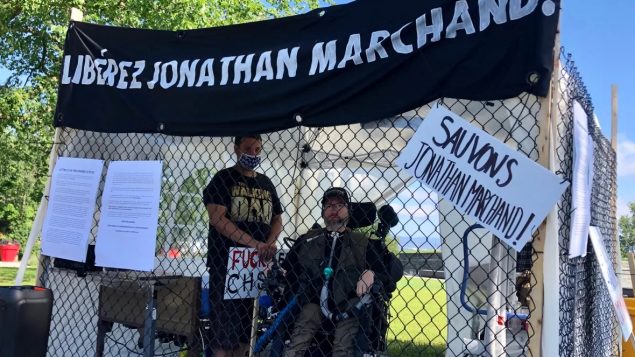 Jonathan Marchand caged himself outside the National Assembly last week, until he got a meeting with Premier François Legault. Marchand never got the meeting but the government said Monday it would form working group to study Marchand’s idea of creating a personal assistance program so people with disabilities can live at home and manage their own support services instead of having to live in an institution. (Marie-Pier Bouchard/Radio-Canada )

The committee is expected to begin next week and to submit a report by the end of the year.

Marchand told reporters Monday he was leaving slightly disappointed that he didn’t get the meeting with Legault.

“As long as I’m there, in a CHSLD, I cannot claim victory, but the door is ajar and that is already a plus. I remain completely determined to get out and show them there’s an alternative,” Marchand said.

“It’s not quite what I expected but I am not leaving empty-handed.”

Marchand won empathy and support from people across the province, who were impressed and moved by his determination and courage. 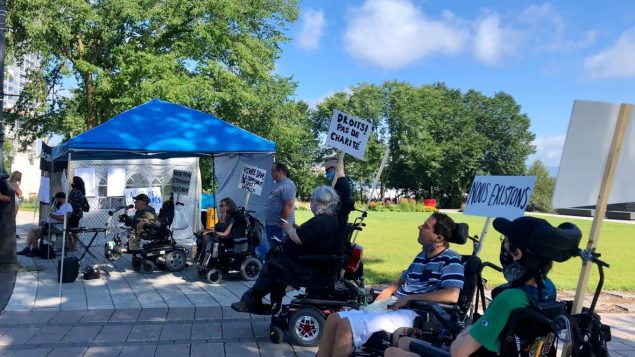 “I’m not just doing this for myself, my goal is to open the cage door by creating a precedent,” Marchand said last week as his cage was set up and was joined by several other people in wheelchairs.

“Everyone is worth it and we must leave no one behind.”

“Everyone must have the right to live on their own and decide who they live with and how they live,” he said last week as he set up his cage.

“This must change, by any means necessary.”