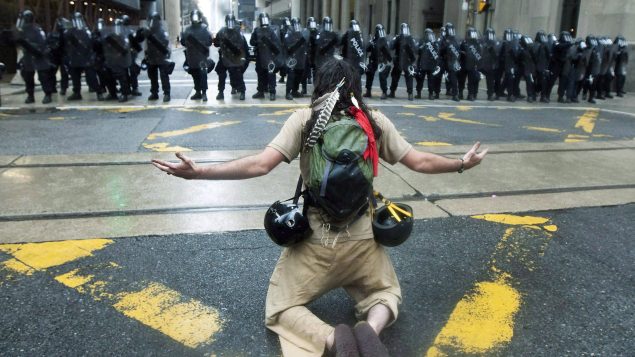 A protester reacts to the riot police while marching along the streets of downtown Toronto during the G20 Summit on June 26, 2010. (THE CANADIAN PRESS/Nathan Denette)

The aftermath and repercussions of the most tumultuous public protests–and largest mass arrests in modern Canadian history–appear to be approaching closure.

On Monday, a $16.5-million settlement was reached in a class-action lawsuit over mass arrests at the June 2010 G20 summit in Toronto when police used a crowd control technique known “kettling” to box in peaceful protesters. 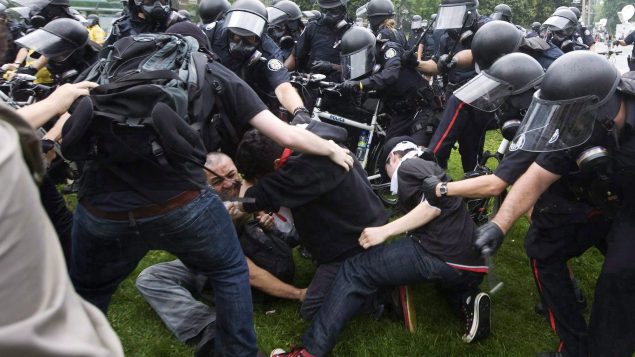 Police club a crowd of activists during the protest at the G20 summit in Toronto on June 26, 2010. Roughly 1,100 protesters caught up in the largest mass arrests in Canadian history during the summit are eligible to receive between $5,000 and $24,700 each in the proposed settlement of a class-action lawsuit against the Toronto Police Service. (THE CANADIAN PRESS/Darren Calabrese)

According to a document filed on behalf of the protesters in the class action, hundreds of protesters were detained without access to legal counsel, adequate food or water or bathroom privacy, in overcrowded wire cages in a makeshift jail for hours–in actions that shocked Canadians across the country.

“When these events happened many Canadians could not believe they happened in Canada. The settlement appears to fairly recognize through financial compensation, acknowledgements and reforms that they shouldn’t have happened and will never happen again,”  Eric Gillespie, a Toronto litigation lawyer who led the case with Murray Klippenstein, told The Canadian Press.

In the proposed settlment the Toronto Police Service also agreed to expunge any records of the protesters’ arrest and detention, unless they were charged with an offence, and committed to more appropriate use of crowd-control techniques, such as giving people warnings and a chance to disperse.

Thousands of demonstrators–both before and during the summit–demonstrated peacefully, addressing issues such as climate change, globalization and poverty. 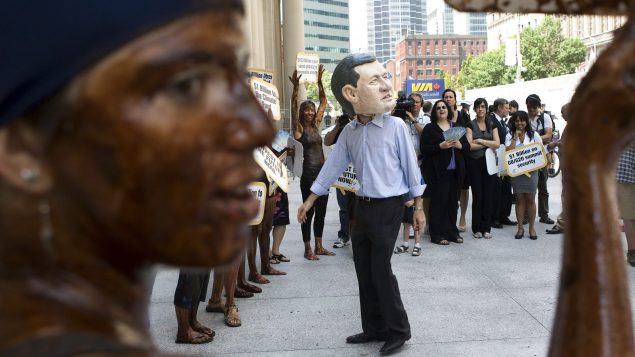 A protester wearing a giant head caricaturing Canadian Prime Minsiter Stephen Harper joins demonstrators covered in a cocoa and vegetable oil to resemble a human oil slick during a G8 protest organised by Oxfam Canada as part of a Global day of Action on the G8 and G20 summits in Toronto on June 17 , 2010. (THE CANADIAN PRESS/Chris Young)

Other protests were accompanied by deliberate vandalism.

The lawsuit was launched in 2010 by Sherry Good as the legal representative of approximately 1,100 class members.

The police service did not admit liability or acknowledge violating protesters’ rights under the Charter of Rights and Freedoms in the settlement.

Nor did it entirely forswear aggressive containment techniques used at the summit but said their measures should be proportionate to the risk of harm.

It did promise to respect Charter of Rights and Freedom rights in the future.

The settlement is scheduled to come before Ontario Superior Court Justice Edward Belobaba on Oct. 19.