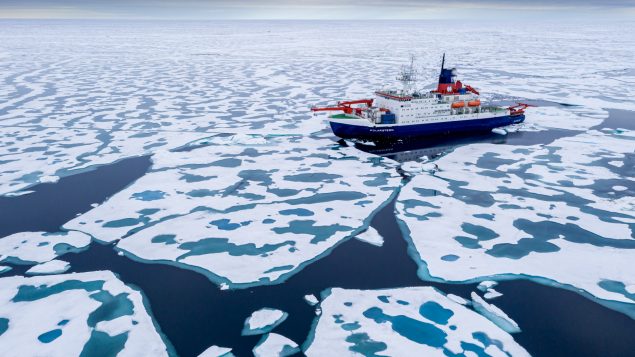 Heading for the new MOSAiC ice floe, German research icebreaker Polarstern took the shortest way to the area of interest: via the North Pole. On the way north, the sea ice was surprisingly weak, had lots of melt ponds, and Polarstern was able to easily break it, said Captain Thomas Wunderlich. (Photo courtesy of Alfred Wegener Institute)

A German research icebreaker carrying an international team of climate scientists was able to reach the North Pole on Wednesday largely due lighter-than-usual sea ice conditions in the High Arctic, underscoring the dramatic changes happening in the North.

The German icebreaker, RV Polarstern, with members of the Multidisciplinary drifting Observatory for the Study of Arctic Climate, or MOSAiC for short, followed a route to the north of Greenland – and through a region that, in the past, was densely covered with ice, including multiyear ice.

The journey from the northern Fram Strait to the North Pole only took less than a week, said a press release by the Alfred Wegener Institute’s Helmholtz Centre for Polar and Marine Research.

Polarstern Captain Thomas Wunderlich said he was very surprised to see how soft the ice had become even at 88° North this year, having thawed to the point of being “thin and porous.”

“Even after passing 88° North we mostly maintained a speed of 5-7 knots; I’ve never seen that so far north,” Wunderlich said in a statement.

“For this region, the current situation is historic. Normally it’s wise to avoid the region north of Greenland, because it’s home to the thicker and older ice, and virtually impassable. But now we’re finding extended stretches of open water, reaching nearly to the Pole.” 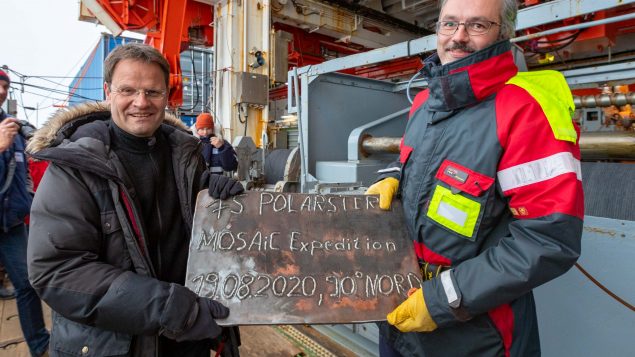 MOSAiC chief scientist Markus Rex (left) and Polarstern Captain Thomas Wunderlich hold a steel plaque that was especially made for the expedition’s visit to the North Pole. (Photo courtesy of Alfred Wegener Institute)

“Up until 87° 30’ North, for the most part we passed through open water, in some cases stretching to the horizon,” Rex said in a statement.

“Based on the satellite imagery, at first we weren’t sure whether the loose ice cover was due to wind and currents, and were concerned that, if it was, a change in weather conditions could compact it again.”

Once in the region, however, they found that much of the sea ice truly had melted away, and hadn’t simply been broken up by the wind, Rex said.

This is yet another unique phenomenon that was observed and investigated by MOSAiC researchers, following the substantially accelerated melting rates in the Siberian sector in July, Rex said. 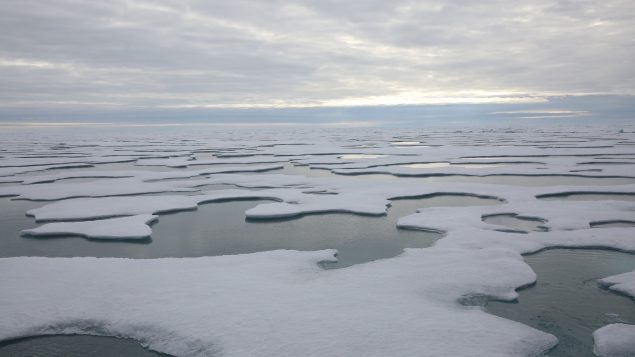 Polarstern approaches the North Pole and passes ice easy to sail through. Covered with melt ponds and melting from the bottom, the sea ice is no real barrier for the research icebreaker on her way to search for a new ice floe to study the onset and early freezing on the final MOSAiC leg. (Photo courtesy of Alfred Wegener Institute)

The Arctic sea ice extent reached a record low in July, shrinking to levels not seen since satellite observation of the region’s ice cover began in the late 1970s, according to MOSAiC.

The mission sailed from the German port of Bremerhaven last September, anchored to an ice floe and conducted numerous experiments to study the impact of global warming on the Arctic until the summer heat broke apart the ice cover.

“For the final phase of MOSAiC, the expedition team will be focusing on the freezing phase: the last piece of the puzzle in terms of observing the Arctic ice throughout its annual cycle,” Rex said.

Moving on from the North Pole, the Polarstern will follow the Transpolar Drift a bit further towards the Siberian coast, until MOSAiC reaches 87° North.

“Depending on the ice conditions, however, we’ll also start looking for a suitable floe in the vicinity of the North Pole, so that we can start working on the ice as soon as possible,” Rex said.

The 100 crew and scientists from 20 nations, including Canada, are planning to return to Germany on Oct. 12.