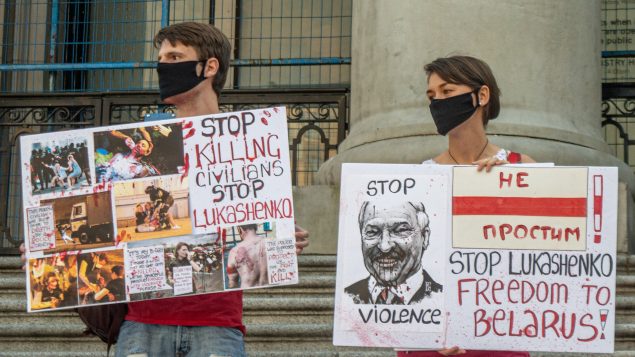 Members of Vancouver's Belarusian community are calling for an end to the deadly violence against unarmed protesters in Belarus by security forces and for resignation of the county's iron-fisted leader Alexander Lukashenko. (Photo courtesy of Serguei Sviridov)

Members of the small Belarusian community in Canada are demanding Ottawa take a tougher stance against the government of President Alexander Lukashenko who has faced unprecedented protests after claiming a landslide victory in a highly controversial election on Aug. 9.

Canada has already announced that it does not accept the results of the “fraudulent” presidential election in Belarus and has called for “free and fair elections.”

Foreign Affairs Minister Francois-Philippe Champagne has also spoken with opposition presidential candidate Svetlana Tikhanovskaya who fled to neighbouring Lithuania on Aug. 11, conceding in a video posted online that she was unprepared for the kind of brutal pressure and intimidation that the Lukashenko regime exerted at her.

While members of the Canadian-Belarusian community have expressed their appreciation for Champagne’s actions, they want the federal government to use its recently adopted Magnitsky Act to target Lukashenko and his cronies, and impose sanctions against state-owned Belarusian enterprises, according to a communique released by a coalition of community groups.

“We insist that Canada shall not recognize the dictatorship of Lukashenko as a legitimate government, as had already been done by 27 countries of European Union,” the communique says. “We demand recognizing Svetlana Tikhanovskaya as our one and true elected people’s president.” 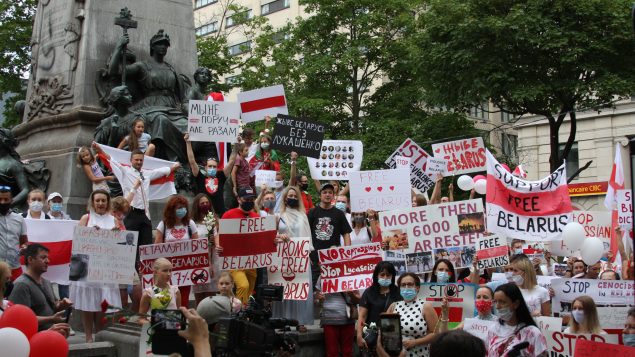 Members of Montreal’s Belarusian community gathered on Aug. 13 at Phillips Square to denounce the police crackdown on peaceful protesters in Belarus following the Aug. 9 election. (Photo courtesy of Katia Parfianovich)

The communique also calls on Canada to join forces with the European Union on instituting new sanctions on Lukashenko and his regime.

Lukashenko, who has ruled the Eastern European nation since 1994, ordered a brutal police crackdown against tens of thousands of people who took to the streets all throughout Belarus to protest the election results.

Police used rubber bullets, stun grenades and clubs to disperse the peaceful protests, injuring hundreds and arresting nearly 7,000. At least three protesters died. Many of the detainees reported savage beatings and other abuse in police custody.

The fierce clampdown fueled outrage and caused protests to swell, with an estimated 200,000 rallying around the Belarusian capital’s central square on Sunday in the largest protest the ex-Soviet nation of 9.5 million ever saw.

Since Monday, factory workers, medical workers, actors, musicians and other workers have gone on strike to demand Lukashenko’s resignation. 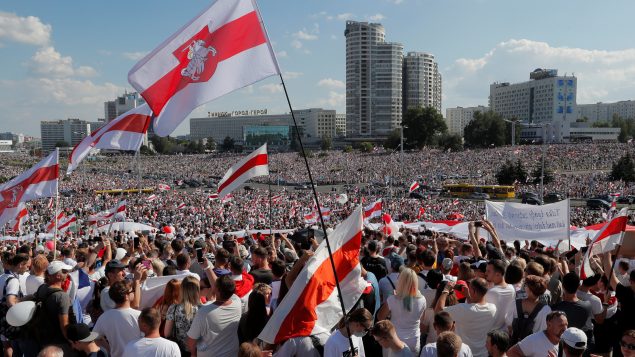 Members of the Belarusian Diaspora worldwide, including all across Canada, have staged rallies in support of the pro-democracy protesters in Belarus and Tikhanovskaya, who is believed to have won the election.

Alexandra Nestertchouk, a Vancouver-based Belarusian IT professional, said the crisis in Belarus has mobilized the Belarusian community in Canada.

“Before these elections, there was no such thing as a standalone Belarusian community in British Columbia,” Nestertchouk said.

“Belarusians are very friendly and we are friends with Russians and Ukrainians… but there was no community until probably June this year, at least in British Columbia.”

The situation was a bit different in Toronto, which had long-established community organizations, she said.

All that changed in mid-July, following the registration of official candidates for the presidential election after two of the strongest opposition candidates, including Tikhanovskaya’s husband, Sergei, were jailed and a third one was forced to flee the country, Nestertchouk said.

Back then only 15 to 25 people gathered to express their solidarity with the opposition candidates, Nestertchouk said.

“I’m not an activist, my family are not activists, we never took part in politics until a month ago,” Nestertchouk said.

However, she wanted to become an accredited election observer and decided that she would travel to Ottawa to observe the election at the Belarusian embassy, Nestertchouk said.

It took her three attempts until she finally registered as an observer at the Belarusian embassy in Ottawa, Nestertchouk said, and that process gave her an insight into how corrupt and rigged the entire electoral system was.

“But to give them credit they actually counted [the ballots] fairly,” Nesterthcouk said. 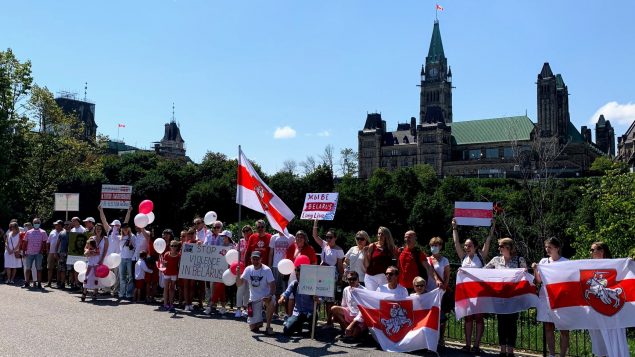 Members of Ottawa’s Belarusian community rally on Aug. 16 on Parliament Hill in support of peaceful protests in Belarus. (Photo courtesy of Alex Kakhanovich)

In all, 352 people from Toronto, Montreal, Calgary, Edmonton, Vancouver, Halifax, Quebec City and Winnipeg were able to cast ballots at the embassy polling station in Ottawa, she said.

The lineup around the highrise building housing the Belarusian embassy stretched for two blocks, Nesterthcouk said.

Tikhanovskaya received 321votes or 92 per cent of the vote, Lukashenko only 21 votes, according to the official voting bulletins, Nestertchouk said.

But the results from polling stations in Belarus were completely rigged, she said.

The opposition had organized a sophisticated system of monitoring and tallying the vote, with people taking photos of their marked ballots and sending them to a centralized database that then compared these results to the official numbers.

According to numbers released by this initiative, dubbed Golos (Voice or Vote), based on the verified ballots on their online platform, 1,001,569 people voted for Tikhanovskaya. Lukashenko received only 10,038 votes.

Another massive demonstration is planned in Belarus on Aug. 23, and Belarusian communities in 18 countries, including Canada will be joining the protests, Nestertchouk said.