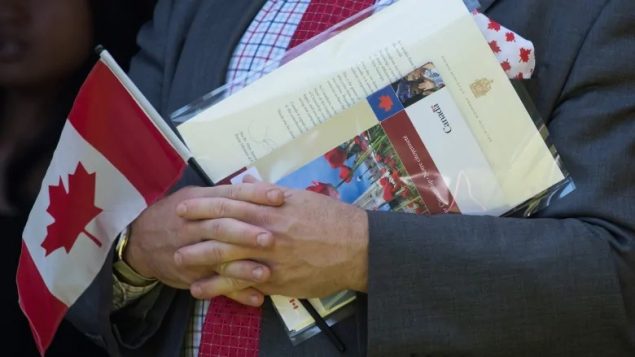 A new Canadian holds a Canadian flag, their citizenship certificate and a letter signed by Prime Minister Justin Trudeau as they sing O Canada after becoming a Canadian citizen, during a Canada Day citizenship ceremony in West Vancouver on Monday, July 1, 2019. A report from the Royal Bank of Canada says a slowdown of immigration to the country due to the COVID-19 pandemic threatens to derail a major source of economic growth, at least temporarily. (THE CANADIAN PRESS/Darryl Dyck)

A new report from the Royal Bank of Canada says new federal government statistics that show immigration in a free fall because of COVID-19 are cause for serious concern.

The new data showed that immigration fell by almost two thirds in the second quarter as travel and border restrictions because of COVID-19 took hold in March.

The country accepted only 34,260 permanent residents in the three months through June.

As well, new permanent-residency applications to Canada were down 80 per cent in the second quarter.

The RBC says the plunge threatens one of the country’s main drivers of economic growth and warns that a near-term recovery in immigration is unlikely, suggesting the slowdown could last for months. 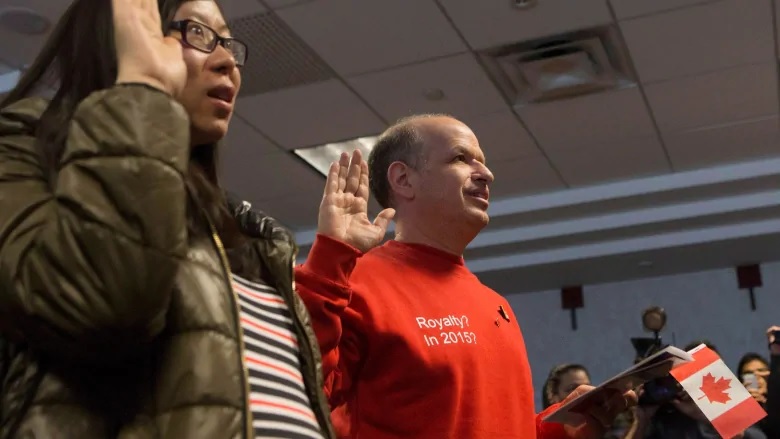 New Canadians are seen taking the oath of citizenship at a ceremony in Toronto in 2015. Travel restrictions because of COVID-19 have resulted in a huge drop in immigration to Canada this year. (THE CANADIAN PRESS/Chris Young)

But in the first six months of 2020, Canada allowed 103,420 permanent residents into the country.

High immigration over the past few years has played a key role in government efforts to grow the workforce and counter an aging population.

The second quarter drop came on the heels of immigration numbers that were stronger in the first three months of the year compared with 2019.

Nearly 70,000 immigrants arrived in Canada at the beginning of this year compared with nearly 66,000 in the first quarter of 2019.

With files from The Canadian Press, CBC News, RCI, Government of Canada