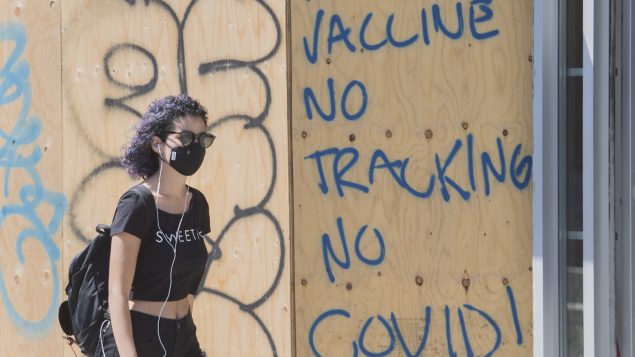 A woman wears a face mask as she passes by graffiti reading 'No vaccine, No tracking, No COVID', in Montreal, on August 16. A new study by Statistics Canada suggests that nearly a quarter of respondents were unlikely or unsure whether they would get a vaccine when one becomes available. (THE CANADIAN PRESS/Graham Hughes)

Tam warns of vaccine disinformation as many Canadians remain wary

Canada’s chief public health officer, Dr. Theresa Tam, says authorities need more information about those who are worried about or opposed to a vaccine to ensure they have the proper information about how vaccines are approved.

And she says she’s concerned about misinformation being spread online about vaccines, adding that internet and social-media companies should have a responsibility to police their domains to make sure that doesn’t happen.

“I do think social media and internet companies do have responsibilities in terms of their role in the space,” she told a briefing in Ottawa on Tuesday.

“So I would look towards different partners, different government departments also coming together to look at how we better address some of the misinformation that’s in that space.”

Tam said “vaccine confidence” is integral to the successful rollout of a vaccine. 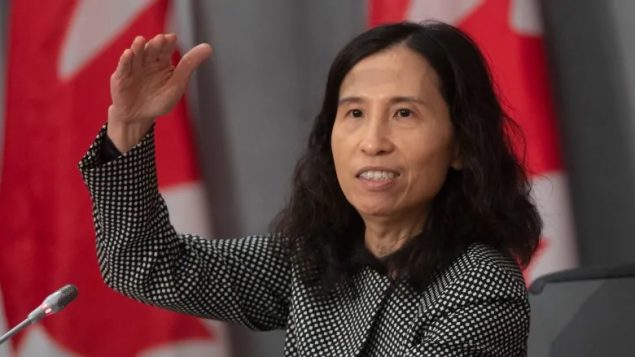 Chief Public Health Officer Theresa Tam (pictured in April) says she is concerned about misinformation spread online about vaccines. She says internet and social-media companies should have a responsibility to police their domains to make sure that doesn’t happen. (THE CANADIAN PRESS/Adrian Wyld/)

The studies suggest that a vast majority of Canadians (76 per cent) would get a COVID-19 vaccine when it becomes available.

However, 14 per cent said they were somewhat or very unlikely to do and nine nine per cent were unsure.

Among the reasons respondents gave for not wanting the vaccine were concerns about its safety and potential side effects.

Others said they did not trust vaccines in general. 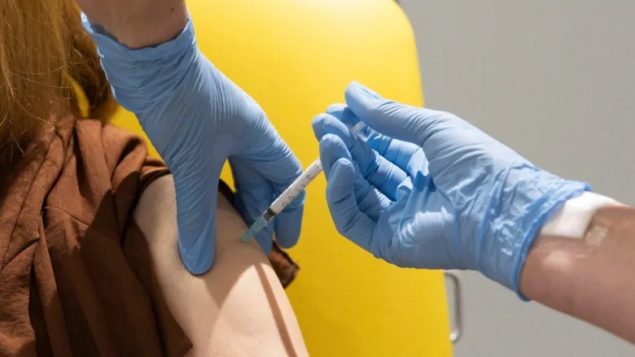 In this handout photo released by the University of Oxford, a volunteer participates in a vaccine trial in Oxford, England on July 7. The newly-released Statistics Canada survey indicated younger Canadians and those who don’t have a university degree are more likely to be hesitant or nervous about a vaccine than those who are older and more educated. (University of Oxford/Associated Press)

About one-quarter of respondents, who were allowed to give more than one answer, said they did not consider it necessary to get the vaccine while about 10 per cent indicated they did not believe in vaccines at all.

More than one-third said they would likely just wait until the vaccine seemed safe.

The survey indicated younger Canadians and those who don’t have a university degree are more likely to be hesitant or nervous about a vaccine than those who are older and more educated.

The survey’s release comes as governments around the world rush to develop a vaccine for the illness that has infected more than 23 million people world-wide, including nearly 126,000 in Canada.

Tam repeated her oft-stated position that while efforts are being made to accelerate development of a vaccine, the federal government will not take shortcuts when it comes to ensuring the safety of a COVID-19 vaccine before it is approved and distributed.

“Just because it’s an accelerated process to get vaccines for Canadians does not mean we’re going to shortchange anything on safety and effectiveness,” Tam said. “I do have confidence in our regulatory system.”

Statistics Canada carried out the crowd-sourced survey of around 4,000 Canadians between June 15-21.

It cannot be given a margin of error because the participants do not represent a random sample.