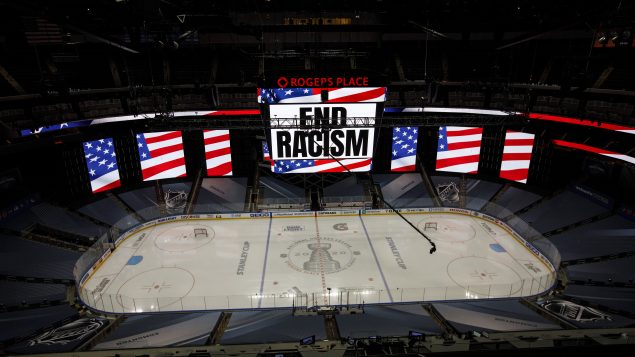 An End Racism sign is shown before the game between the Dallas Stars and Colorado Avalanche during NHL Western Conference Stanley Cup playoff action in Edmonton on Wednesday. (THE CANADIAN PRESS/Jason Franson)

Joining others, the NHL and its players cancel games to protest racism

Call it the bubble bursting.

On Thursday–after apparently trying to skate past the issue for most of the week–National Hockey League players joined their professional brothers and sisters in sports leagues across North America to protest racism, police violence and, specifically, the shooting of Jacob Blake, a Black man gravely wounded in Wisconsin last Sunday.

Blake, 29, was shot seven times in the back by a Kenosha police officer as three of Blake’s six children watched from his car.

He is reported to be paralyzed from the waist down.

His family says he is handcuffed to his hospital bed.

Not since the death of George Floyd in Minneapolis in May has a police shooting so galvanized so many people in the United States, including the spiritual offspring of former NFL quarterback Colin Kaepernick, who took a knee before a football game four years ago this week and lost his job to a league-wide blackball. 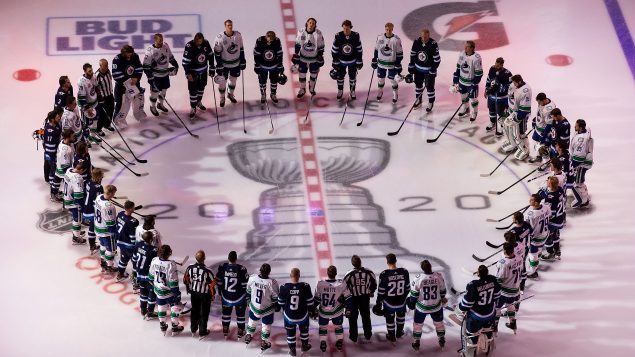 Players from the Winnipeg Jets and the Vancouver Canucks stand in a circle in support of frontline workers and against acts of racism and hate prior to NHL exhibition game action in Edmonton, on July 29. (THE CANADIAN PRESS/Codie McLachlan)

On Wednesday, players on the professional sports franchise closest to Kenosha, the Milwaukee Bucks, announced they would not be participating  that night in the NBA playoffs in Florida.

They were seconded by their opponents, the Orlando Magic.

By Thursday, the impromptu justice movement was moving full speed ahead.

Other teams–including the Toronto Raptors–joined the NBA shutdown, as did teams and individual players from Major League Baseball, Major League Soccer, and the Women’s National Basketball Association.

“Where are the hockey players?” people kept asking. 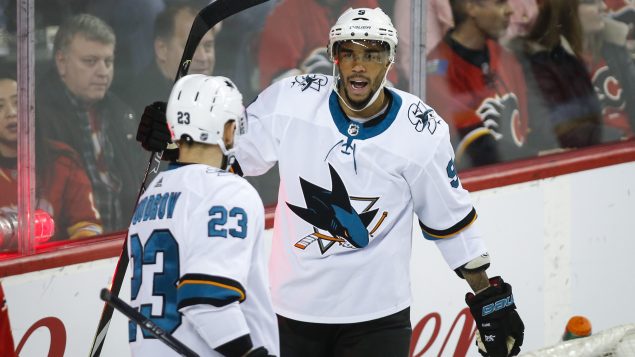 San Jose Sharks’ Evander Kane, right, celebrates his goal with teammate Barclay Goodrow during second period NHL hockey action against the Calgary Flames in Calgary on February 4. The predominantly white sport of hockey has a checkered history of racism and a culture of not standing out from the team or speaking out. (THE CANADIAN PRESS/Jeff McIntosh)

Answer: they were playing in their bubbles in Toronto and Edmonton, games that offered a “moment of reflection” before the performing of the national anthems.

Also, it appears, they were also talking–and thinking hard–about what to do.

Members of the Hockey Diversity Alliance — a group formed earlier this year that hopes to “to eradicate racism and intolerance in hockey” — tweeted out messages on Thursday, asking the league to suspend NHL games that night.

“We strongly feel this sends a clear message that human rights take priority over sports,” the tweets read.

Former NHL player Akim Aliu, who is part of the Diversity Alliance–along with, among others, Evander Kane of the San Jose Sharks and Matt Dumba of the Minnesota Wild–went further in a subsequent post asking for the postponement.

“What’s more important, shining a light on social justice, police reform and inequalities of the black and brown community or playing hockey games that generate revenue for a billion dollar industry?” Aliu tweeted. “This decision should be an easy one….come on now y’all! It’s time to wake up!!!”

The Black Lives Matter movement had finally arrived in the predominantly all-white NHL.

On Thursday evening, in a joint statement the NHL and its players’ association said the players “believe that the best course of action would be to take a step back and not play tonight’s and tomorrow’s games as scheduled.”

The decision impacted all the eight remaining playoff teams, starting with Thursday games between the Philadelphia Flyers and New York Islanders, and the Vancouver Canucks and Vegas Golden Knights.

The Boston Bruins were scheduled to play the Tampa Bay Lightning on Friday followed by a game between the Colorado Avalanche and Dallas Stars.

The NHL said the four games would be rescheduled beginning on Saturday.

Following the announcement, Ryan Reaves, of the Vegas Golden Knights, who is Black, stood in front of dozens of NHL players in the Edmonton bubble. 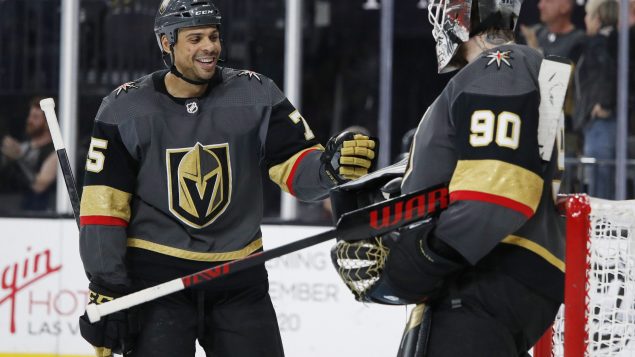 “I think if you look around this room, there’s a lot of white athletes that’s in here, and I think that’s the statement that’s being made right now,” Reaves said.

“It’s great that the NBA did this and the MLB and the WNBA, they have a lot of Black players in those leagues. But for all these athletes in here, to take a stand and say, you know what? We see the problem, too, and we stand behind you. I go to war with these guys and I hate their guts on the ice, but I couldn’t be more proud of these guys.

“These two days isn’t going to fix anything, but the conversation and the statement that’s been made is very powerful, especially coming from this league.”