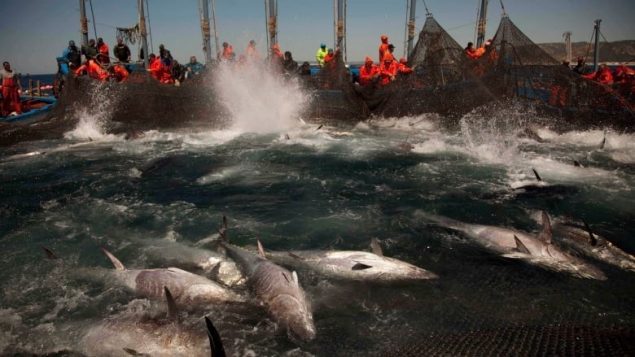 You probably never noticed, but last week we used up all the resources that can be renewed annually by the Earth. That means we’re now spending more than we earn environmentally, so to speak.

Last Saturday was Earth Overshoot Day, or as they put it on the website, it’s the date “when humanity’s demand for ecological resources and services in a given year exceeds what Earth can regenerate in that year”.

Toronto’s York University Faculty of Environmental Studies produces the data to calculate the ecological footprint and bio-capacity of every nation on the planet in collaboration with the Global Footprint Network.

Loss of forest cover is not just a concern in Canada’s boreal forest but around the world including both legal and illegal clearings in the Amazon and around the world. Here,A worker cuts an acacia tree during an area clearing near Bukit Tiga Puluh natural forest in Riau, Indonesia, in April 2008. (Achmad Ibrahim/Associated Press)

That data is provided to the Canadian non-profit Footprint Data Foundation which since 2003 has been publishing the National Footprint and Bio-capacity accounts for all countries since 1961 to the present.

The reports show that for almost five decades, humanity has been overshooting the Earth’s capacity to replenish and maintain resources. This is shown in rising carbon pollution and a major decline in biodiversity

“Ecosystems, species, wild populations, local varieties and breeds of domesticated plants and animals are shrinking, deteriorating or vanishing. The essential, interconnected web of life on Earth is getting smaller and increasingly frayed. This loss is a direct result of human activity and constitutes a direct threat to human well-being in all regions of the world.” German professor Josef Settele, co-author of the 7th  Intergovernmental Science-Policy Platform on Biodiversity and Ecosystem Services (IPBES) assessment in 2018

What may be seen as some good news is that this year, the ‘overshoot’ day occurred three weeks later than last year. This was attributed to the shutdowns resulting from actions related to the pandemic in which much less fossil fuels were burned, slowdowns in extraction industries, and generally in most human activity.

Nonetheless, from this week on, humanity is taking more than the planet can renew as it has been doing every year since 1970.