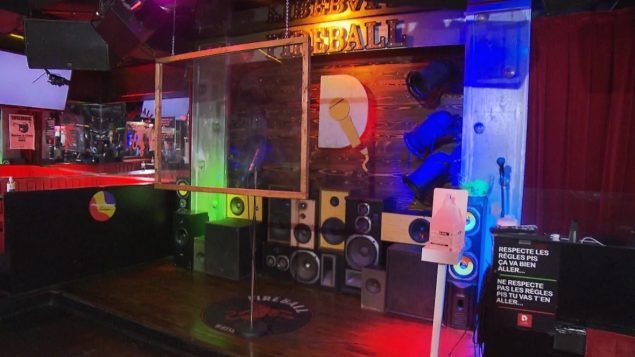 A Plexiglas screen hangs in front of the microphone on the stage of Le Date Karaoke, a bar in Montreal's gay village. Nobody will be singing at the club for the next while. (Radio-Canada)

COVID-19 scores another victory: a TKO over Quebec’s karaoke bars

COVID-19 has taken another hostage.

This time, it’s Quebec’s karaoke scene: 500 to 600 bars across the province that–depending on your sensibilities–can be a joy to behold or a place you want to get the heck out of as fast as you can.

They will be closed for a while.

The province also will now require bars to keep a register of customers to make it easier for public health authorities to track down people who may have been in contact with an infected person. 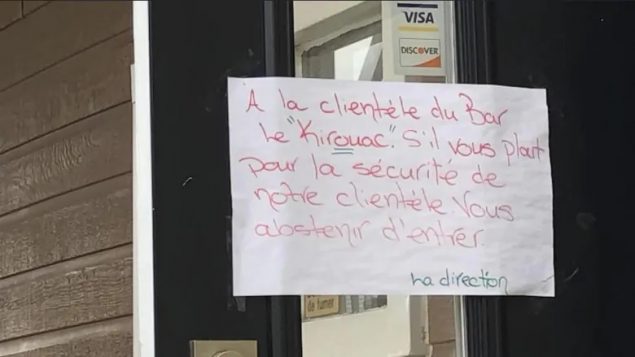 A sign at the entrance of La Gamelle in Quebec City asks Bar Kirouac patrons to stay out ‘for the safety of our clientele.’ (Radio-Canada)

In a news release, the Quebec Health Ministry cited the projection of respiratory droplets when singing and the tendency among singers to share microphones.

“Due to the real risks of transmission of COVID-19 represented by karaoke activities, whether in bars or elsewhere, we have decided to suspend these in public places throughout Quebec,” Dr. Horacio Arruda, Quebec’s public health director, said in the release.

“This measure is part of our preventive actions in the face of a probable second wave of cases,” the release says.

“However, it does not prevent the establishments concerned from continuing their other activities, provided they comply with current guidelines.”

In the release, the government also strongly discouraged karaoke activities held at private venues that involve people who don’t live together.

The decision follows a COVID-19 outbreak in Quebec City that began at a karaoke bar last month and has, as of Tuesday, spread to 68 people, with 18 secondary cases in the community, including four schools.

Karaoke is extremely popular in Quebec bars, but the outbreak that was born at Bar Kirouac in Quebec City’s Saint-Sauveur district just kept getting worse–its spread abetted by some customers who went to another bar, La Souche, in the Limoilou neighbourhood. 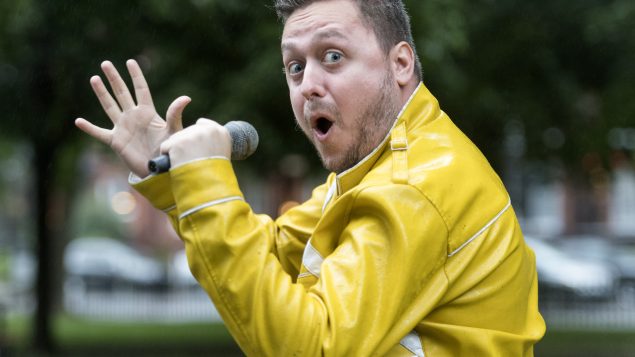 Mike Charlebois, aka Billy Karaoke, poses in Montreal on Thursday. Charlebois describes karaoke as a way of life, a form of expression and a little bit of escapist fun — something he says is more important than ever as the world grapples with a health crisis. (THE CANADIAN PRESS/Graham Hughes)

On Tuesday, the Quebec government unveiled its new four-tier regional alert and response system for COVID-19, noting that the Quebec City region was one of four to be placed on the second tier, or the yellow zone.

On Thursday, the government said it would begin fining people who do not wear masks in indoor public places such as businesses, and on public transportation.