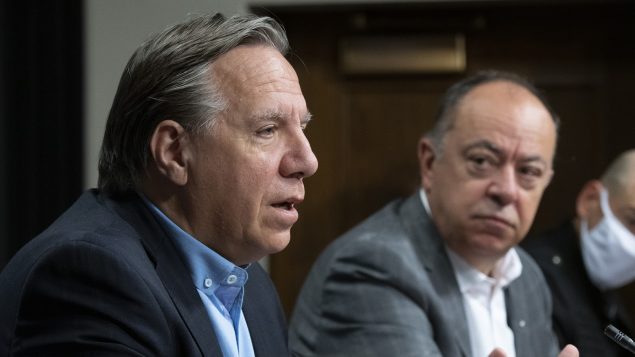 Quebec introducing fines for people who refuse to wear masks

The Quebec government will begin giving out fines to people who refuse to wear masks starting this Saturday, according to an announcement from Quebec Premier François Legault.

In a news conference on Thursday morning, Legault said the new rules will apply to people who do not wear masks in indoor public places such as businesses, and on public transportation in all territories of Quebec.

He added that special attention will be paid to “yellow regions” under the province’s new COVID-19 alert and intervention system that was introduced earlier this week. The alert system allows themselves the provincial government to deploy measures to slow down transmission of the virus in specific regions.

Four regions in Quebec are currently in the yellow tier of the new alert system; Quebec City, the Eastern Townships, the Outaouais, and Laval. Quebec’s highest population centre, Montreal remains in the lowest alert tier, green. However that can change as the city has seen a rise in cases as well.

Quebec has recently seen an uptick in COVID-19 cases. On Sunday there were 205 new confirmed cases, the highest amount in three months, and on Monday, an additional 216 cases were reported. Today, the province reported 188 new cases.

Business owners could already face fines in Quebec when the government began mandating masks in indoor public spaces back in July, but individuals would not face any penalties until now.

Legault said that Deputy Premier Geneviève Guibault will announce more details on the fines in the coming days before the fines go into effect.