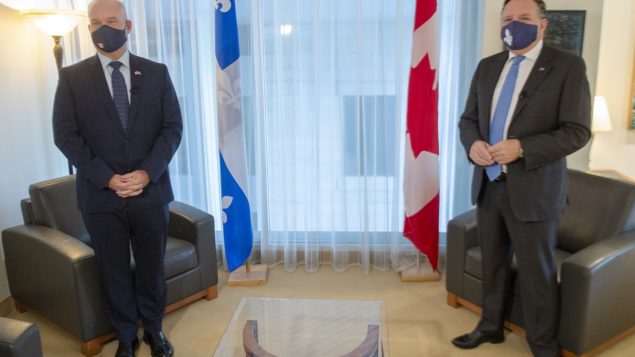 Conservative leader Erin O’Toole says he is going to respect the legislatures of all the provinces, including the laws in Québec protecting secularism and the French language, after meeting with Québec Premier Fraçois Legault on Monday.

I had a frank, honest and more than cordial discussion with @francoislegault about the priorities of Quebecers.

We spoke about the importance of the Québec nation and protecting the French language.

We both agreed that we have to work closely on our economic recovery. pic.twitter.com/47fMYXXgrE

In a news conference following the meeting, O’Toole said that there’s a national unity crisis at the moment and that there is a need for a government in Ottawa that respects provincial autonomy and legislature.

Québec’s secularism law, known as Bill 21, has been the subject of controversy mainly due to the section that bans civil servants in positions of authority from wearing any religious symbols, such as the hijab or kippah.

“Personally, I served in the military with Sikhs and other people. I understand why it’s a difficult question, but as a leader you have to respect our constitution and the partnerships we need to have in Canada.”Conservative leader Erin O'Toole

In a tweet following the meeting, Legault said that he had a good meeting with O’Toole, citing the fact that O’Toole will not challenge Bill 21, is open to giving more power to Québec in regards to immigration, and is open to health transfers to the provinces.

O’Toole also supported Québec’s move to expand the province’s Charter of the French Language, also known as Bill 101, which resolves to make the French language as the common and business language within the province.

Québec’s Minister of the French Language, Simon Jolin-Barrette, recently said that there are plans to subject federal companies, such as banks and VIA Rail to the province’s language law.

“I think large federal institutions should respect the French language provision in Quebec. I think it’s a question of respect and I understand the priority of protecting language, culture, and identity.”Erin O'Toole

The meeting with Legault was O’Toole’s first in person meeting with a Premier since he won the Conservative leadership race in August.